I've been cracking my head trying to make sense of Molecular Orbital Theory, but all sources I find are simplistic {If anyone has an online course or a book to recommend, I'd really appreciate}. Therefore, my questions are quite simplistic:

1 - Why should atoms in the first row {Hydrogen} interact with atoms in other rows {Lithium, Beryllium, Boron, etc}? I mean, as a way to answer why two Hydrogen atoms form a Molecular Orbital in the first place, I have the postulate that it is due to Pauli Exclusion Principle: as the 1s Orbitals - and, by extension, its electron - overlap, a new orbital is formed to avoid* having two electrons with the same quantum numbers. But, when Lithium approaches Hydrogen, there is only a significant overlap between 1s and 2s Orbitals. In this sense, there is no threat* to Pauli's principle, given that the approaching electrons do NOT have the same quantum numbers. Which yields the question: how do Lithium and Hydrogen bond?

. * I understand that the universe doesn't care about what we, smart monkeys, think of it. It doesn't see things as "threats". Still, interpreting things this way makes everything easier.

2 - Why won't Helium bond with Hydrogen? The approach of He and H should form bonding and anti-bonding Orbitals, which will be filled with three electrons. This should place two electrons in the Sigma Bond, but only one in the Sigma* Bond. Therefore, the bond order is 0.5! So why HeH isn't observed? Another way to phrase it: If He2+ can exist as a molecule, why can't HeH?

Thank you very much for your time. Sorry if I messed something up. 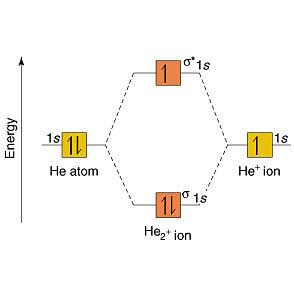 You've asked seemingly simple questions that get into quirky considerations. A molecule of HeH would very unstable:

As Oscar points out HeH probably can be made. In all of deep space where molecules could go days before colliding with another particle there must be at least one molecule of HeH. So it can be "made" and it does "exist." But how would you detect it?

Typically when we are talking about "making" something we are talking about making it in a earth bound laboratory. You make enough to at least observe it somehow. For instance a lot of radioisotopes have half-lives less than a second which really doesn't give an experimenter time to do any really "chemistry" with them. So in any practical sense the HeH molecule doesn't exist.

Probably $\ce{HeH}$ can be made, but, like the dihelium cation, it would not be stable in low-energy environments such as a typical condensed medium. And its nonionic character means we can't see $\ce{HeH}$ in a mass spectrometer.

What drove you to this kind of considerations is the use of that postulate, which is not true as your second question made clear. First combine the relevant AOs, then fill in the electrons following the Aufbau, considering the exclusion principle by Pauli, and applyibg Hund rule. Find out the energy of the molecule, the bond order, and compare to the energy of the atoms. Alternatively, you can still regard MOs as forming by virtue of Pauli exclusion, nevertheless this alone does not tell you anything about bond formation (only in H H it happens to be the case).

If you draw a qualitative MO diagram for hydrogen helide (HHe), taking into account the stability of H and He (in other words He as being noble has a much higher electronegativity than H, so following the common rule its AO lies lower down in energy), you see that overall you end in an antibonding situation, different than the isolectronic - but homonuclear - case of dihelium+ that you've mentioned as example.

Bond order 0.5 means that it CAN exist, but it's just not very stable. At the end of the day, it probably exists in deep space or something, but would immediately decompose if we synthesised it.

Also, one must note that the orbital interaction is non-degenerate, meaning that your diagram is very much inaccurate. Due to the immense energy gap, there would be little-to-no interaction whatsoever.

4
What is the reason behind neglecting & putting the overlap integrals $0$ in Simple Hückel Theory?
2
Bond order of H2O and NH3 using group theory to construct MOs
3
The molecular orbitals of lithium hydride