A cute homegrown spy-trick we all know: lemon juice invisible ink. But there is no scholary article available in the internet about this phenomenon.

A rough explanation I found in Scientific American:

Lemon juice—and the juice of most fruits, for that matter—contains carbon compounds. These compounds are pretty much colorless at room temperature. But heat can break down these compounds, releasing the carbon. If the carbon comes in contact with the air, a process called oxidation occurs, and the substance turns light or dark brown.

But, this is not the type of explanation to be content with.

Question: What is the mechanism going on here? Please, support your answer with sufficient information and references, don't give a rough explanation.

Edit: I don't think my question is duplicate as I am asking for a well-referenced and informative answer which the other question doesn't have.

Lemon juice works as a sympathetic ink partially due to its caramelization, as @Mithoron profoundly noticed -- especially upon extreme heating.

One of the first in-depth investigations revealed the major role of ascorbic acid degradation referring to the browning phenomena [2]:

Compared with other fruit products, lemon juice contains few natural pigments to mask. ... Because of the high acidity (pH 2.5) of this product, it was unlikely that browning was due to sugar-amine condensation and the results showed that ascorbic acid was the main precursor. Browning of lemon juice and model systems was proportional to the level of ascorbic acid; the presence of amino-acids in model systems increased the intensity of browning.

The principal role of amino-acids in the non-enzymic browning of fruit products appears not to be in the initial reaction leading to the formation of reactive compounds, but to increase the browning potential after the oxidation of the ascorbic acid to reactive carbonyl compounds. Thus, the pathway for the build-up of carbonyls depends on the pH and nature of the product, but in all cases the formation of melanoidin complexes originates from the polymerisation of carbonyl and $\alpha$-amino-groups.

It was also confirmed that the $\alpha/\beta$-unsaturated carbonyls are potent browning agents and also that dicarbonyls of the glyoxal type make a contribution to browning in the early stages.

More recent investigation at elevated temperatures (up to $\pu{120^\circ C}$) also supports the major role of ascorbic acid degradation among other factors of browning [3]:

It is concluded in all mentioned sources that formation of intermediate undesirable carbonyl compounds (mostly furfural and 5-hydroxymethylfurfural (5-HMF)) and various products of their polymerization and combination with amino acids (furfural is an aldehyde) upon heating is one of the major factors of browning.

Maillard reaction is a chemical reaction between an amino acid and a reducing sugar, usually requiring the addition of heat. The reaction is initiated by a condensation between the free amino group of an amino acid, peptide, or protein and the carbonyl group of a reducing sugar, leading to the formation of Amadori compounds (various furoylmethyl derivatives in case of fruit juices)[4].

Caramelization generally occurs at high temperatures (above $\pu{140^\circ C}$), when the juice is dehydrated and has high sugar content. Basically it is a pyrolysis and a final step of decomposition.

To sum it up, these are the products of first 2 processes (ascorbic acid degradation and reaction with amino acids (Maillard process)) (from [3], referred to as browning markers): 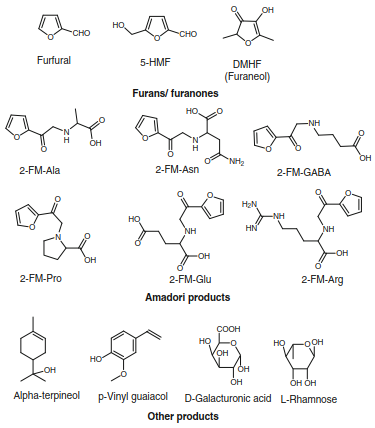 Not the answer you're looking for? Browse other questions tagged organic-chemistry acid-base everyday-chemistry or ask your own question.

23
How does adding lemon juice to sugar make better caramel?
6
What's the technical term for supercharging an acid with an oxidizer? And does it always work?
1
What's the reaction when bleaching hair with lemon juice (citric acid)?
18
Are compounds containing active methylene groups positive for the haloform test?
2
Will squeezing lemon juice on top of foods with ferrocyanide additive release hydrogen cyanide gas?
5
The chemical reaction between lemon juice and polystyrene foam cups
0
What is the citric acid concentration, [HCit], in the lemon juice?