Is the compressibility factor smaller or greater than 1 at low temperature and high pressure?

The compressibility factor of a gas is defined as $Z = pV/(nRT)$. If attractive intermolecular forces dominate then $Z$ tends to be smaller than 1, and vice versa if repulsive forces dominate.

In the case where temperature is low, attractive forces increase due to less kinetic energy, but at the same time repulsive forces also increase due to high pressure. How can I determine which force will dominate?

If we use the Van-der-Waals equation then a plot of Z vs reduced pressure can be constructed. By using reduced values, i.e. pressure and temperature relative to the critical values then a general plot can be made on which data from many different molecules can be superimposed. Look under sections dealing with the Law of Corresponding states in your textbook. From such a plot then it is possible to determine whether the attractive or repulsive part of the potential is the dominant one. 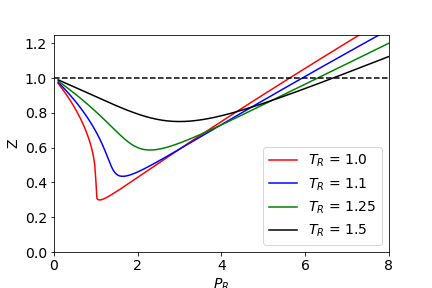 From the figure when $T_R \lt 2$ and $P_R \lt 6.5$ then $Z \lt 1$ and this indicates that a real gas (in so far as such is described by the Van-der-Waals eqn) has a lower pressure than an ideal gas and so this indicates that the molecules are more influenced by the attractive part of the potential than its repulsive part, which is due to their finite molecular volume. If the temperature is higher, above $T_R \approx 2$ (not shown), then Z is positive for all pressures, and similarly above $Z \approx 7$ for all temperatures. In these cases repulsion dominates over attraction.

Not the answer you're looking for? Browse other questions tagged physical-chemistry gas-laws or ask your own question.