I was told there is a proton leak during ATP production. When going through the mechanisms we went over in class, I was unable to find when this occurs.

During what part of ATP production is there a proton leak and what are the ramifications of this?

Three of the four electron-transport complexes, Complexes I, III, and IV, are involved in proton translocation. Two mechanisms have been put across that would couple the free energy of electron transport with the active transport of protons: the redox loop mechanism and the proton pump mechanism.

Electron transport (the oxidation of NADH and FADH2 by $\ce{O2}$) and oxidative phosphorylation (the synthesis of ATP) are normally tightly coupled due to the impermeability of the inner mitochondrial membrane to the passage of protons. Thus the only way for $\ce{H+}$ to re-enter the matrix is through the $\ce{F0}$ portion of the proton-translocating ATP synthase.

In the resting state, when oxidative phosphorylation is minimal, the proton-motive force across the inner mitochondrial membrane builds up to the extent that the free energy to pump additional protons is greater than the electron-transport chain can muster, thereby inhibiting further electron transport.

However, many compounds,including 2,4-dinitrophenol (DNP) and carbonylcyanide-ptrifluoromethoxyphenylhydrazone (FCCP), have been found to “uncouple” these processes. In a pH gradient, they bind protons on the acidic side of the membrane, diffuse through, and release them on the alkaline side, thereby dissipating the gradient.

The chemiosmotic hypothesis has provided a rationale for understanding the mechanism by which these uncouplers act.

Uncouplers act by dissipating the proton gradient across the inner mitochondrial membrane created by the electron-transport system.

As uncouplers, they function by carrying protons across the inner membrane. Their tendency is to acquire protons on the cytosolic surface of the membrane (where the proton concentration is high) and carry them to the matrix side, thereby destroying the proton gradient that couples electron transport and the ATP synthase.

In mitochondria treated with uncouplers, electron transport continues and protons are driven out through the inner membrane. However, they leak back in so rapidly via the uncouplers that ATP synthesis does not occur. Instead, the energy released in electron transport is dissipated as heat.

The presence in the inner mitochondrial membrane of an agent that renders it permeable to $\ce{H+}$ uncouples oxidative phosphorylation from electron transport by providing a route for the dissipation of the proton-motive force that does not require ATP synthesis. Uncoupling therefore allows electron transport to proceed unchecked even when ATP synthesis is inhibited. 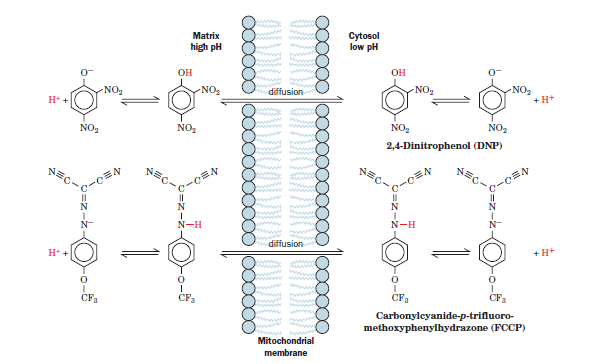 Not the answer you're looking for? Browse other questions tagged biochemistry protons or ask your own question.

3
Spin spin coupling in a proton NMR of an ester?
5
Why does capping after each coupling in Solid phase peptide synthesis improve the results?
0
Why do acids donate protons?
2
Gromacs: What can be reason of getting final potential energy greater than the starting one?
6
How is ATP generated by cellular respiration?
2
why Ammonia is proton acceptor