Deliquescence/efflorescence: How can I convert between salt concentration and RH?

(I am a geologist with minimal chemistry background). 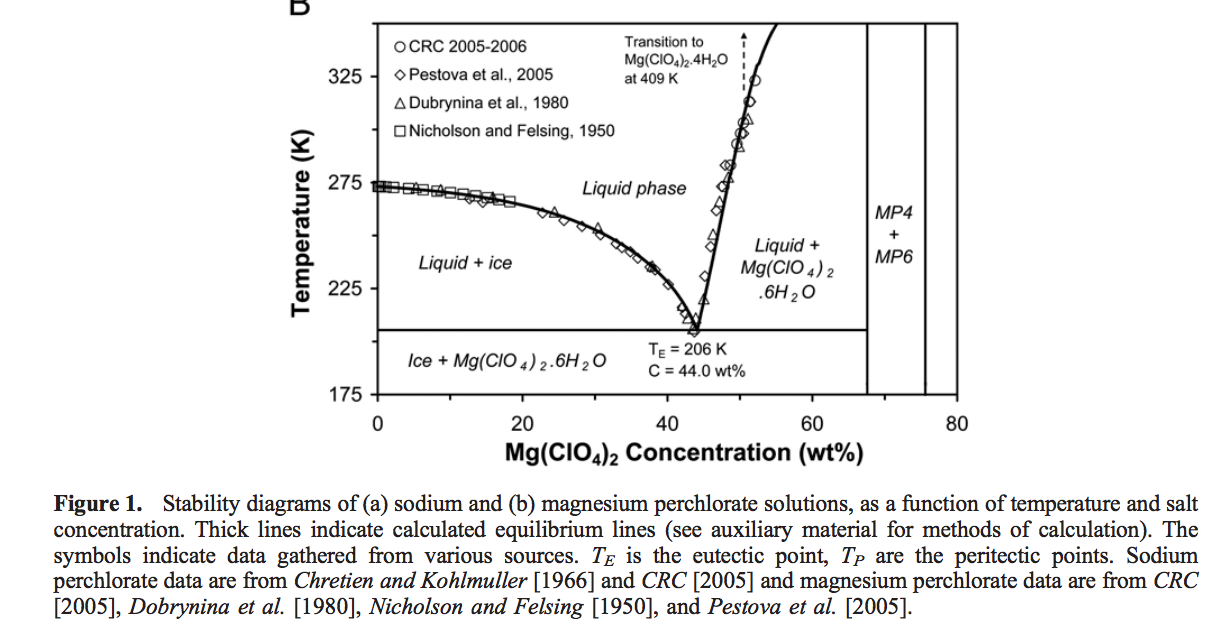 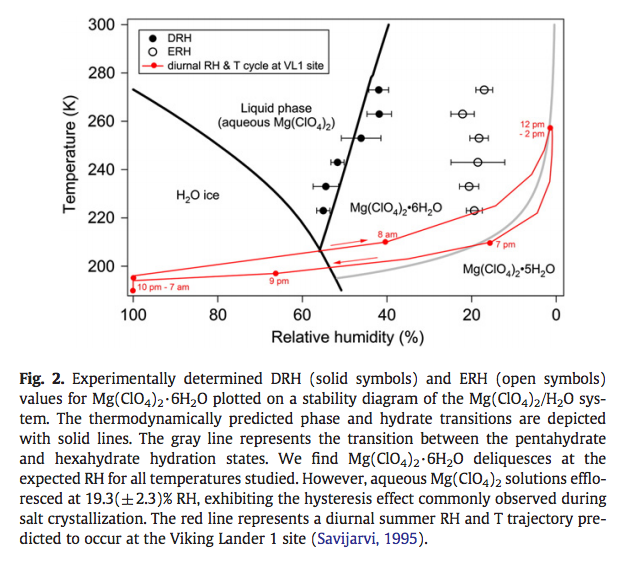 You can't. The two phase diagrams are for two different parts of the system. There isn't enough data to go between the two phase diagrams. You have to use the two diagrams together to estimate the missing data (Relative humidity as a function of temperature over wt% magnesium percolate).

The top figure (Chevrier et al., GRL, 2009) is for a salt in solution. Think of having a sealed bottle with air over solution. The phase diagram shows the relative humidity of the gas as a function of temperature. So at about 240 degrees the equilibrium system has about 45 wt% magnesium percolate in solution.

So at a temperature of equilibrium 240 degrees a solution of magnesium percolate will have about wt 45% of salt and the relative humidity of the air over the solution will be about 50%. You have to combine data from the two phase diagrams to figure out the whole system.

The open circles in the bottom bottom figure (Gough et al., EPSL, 2011.) shows a solid salt in various hydration states (5 vs 6 waters). This sort of detector would be like a crystal oscillator with a coating. As the hydration in the coating changes, then mass of the oscillator changes which changes its fundamental frequency. The chemical reaction (between hydrates with 5 and 6 molecules of water) is not temperature dependent hence the near vertical line.

Not the answer you're looking for? Browse other questions tagged physical-chemistry thermodynamics aqueous-solution or ask your own question.

8
How do I distinguish between internal energy and enthalpy?
4
Calculating enthalpy change and energy required to convert lead sulphide to lead
6
How to Convert Sucrose to Glucose and Fructose
2
How does salt concentration affect corrosion rate of iron?
0
How to calculate concentration from reaction quotient and initial concentration?
2
How do salt additives and impurities affect a critical micelle concentration?
0
Finding Ka of a monoprotic weak acid from pH and concentration of added sodium salt