Below is a copy of the method I am using to determine electron configurations. 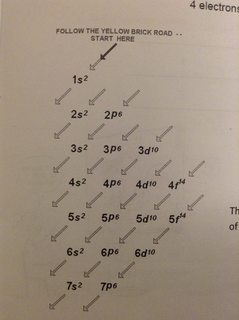 Write the full and short electron configuration for tellurium.

My final answer was:

Is the silly "follow the yellow brick road" thing faulty? Or is it that order doesn't matter in this situation?

I haven't done that in decades (or so), but I'd bet that you did right!

The result from google only lists the final outcome, not the order in which the orbitals are filled. Except for some examples $\ce{La}$, $\ce{Ac}$, etc., the Aufbau principle is reliable. So: Follow the yellow brick road :)

The Aufbau principal is flawed because there are many instances in which the electrons within a given sublevel (say 5s) are not all at close enough energy for that sublevel to fill completely without SOME electrons being more stable at higher "average energy" sublevels first. So what ends up happening is that the 5s starts filling before the 4d if there are not enough electrons to put some in both, but if there are enough to put some in both, some go into the 4d before some go into the 5s.

Certain numbers in the d sublevels are more stable than others, particularly having one electron in each orbital (5 total).

In the case of Tellurium, the 5s sublevel may have a lower average energy than the 4d, but the 4d starts and finishes filling before the 5s as long as there are enough electrons to put some in both sublevels.

Current electron configuration tables show the 4d lower than the 5s when there are electrons in both sublevels, but when there is one electron in the 5s and none in the 4d the 4d may not be shown.

Overall, there are 2 issues. One is that 20 out of 70 natural elements don't follow the Aufbau pattern. Some deviate a lot.

The other is that the Aufbau pattern itself is wrong because xs sublevels should really be placed higher than (x-1)d sublevels, ex. 4d comes before 5s in terms of the order that they tend to fill when there are enough electrons to put some in both.

Not the answer you're looking for? Browse other questions tagged inorganic-chemistry electronic-configuration or ask your own question.

4
Finding electron configuration by following the Aufbau principle
3
What is an intuitive explanation for Electron Configurations
1
What would the Electronic Configuration of Ru²⁺ be?

18
Anomalous electronic configuration of platinum
4
What is the appropriate procedure for determining the quantum numbers of an electron?
1
What would the Electronic Configuration of Ru²⁺ be?
4
Finding electron configuration by following the Aufbau principle