What is the nature of the Fe–O2 binding in oxymyoglobin and oxyhemoglobin?

Deoxymyoglobin ($\ce{Mb}$) is known to have iron in the +2 oxidation state; I believe this was deduced from its magnetic moment, which corresponds to four unpaired electrons in high-spin $\mathrm{d^6}$ Fe(II).

However, upon binding of $\ce{O2}$ (which is itself paramagnetic) to Mb, the resultant complex oxymyoglobin ($\ce{MbO2}$) is found to be diamagnetic.

This observation has been rationalised in several ways over the years. As far as I know, the two main camps are:

The former viewpoint was championed by Linus Pauling, and the latter by Joseph Weiss, leading to a rather heated debate in Nature.1–3

These descriptions of myoglobin of course also apply to hemoglobin, where each monomer is structurally similar to myoglobin.

What experimental evidence supports either side, and is there any general consensus as to which is correct?

TL;DR: It is not really "one or the other" - it is more of "somewhere in between", like a resonance hybrid. If I had to choose, I'd personally lean towards Weiss's $\ce{Fe(III)-O2-}$ model. However, there will always be people who disagree, and there is still no general consensus amongst the scientific community.

There is an excellent - and recent - perspective article by Bren et al.,1 describing the research carried out on the structure of hemoglobin ever since Pauling and Coryell's initial report2 on the diamagnetism of oxyhemoglobin.

A common technique in bioinorganic chemistry is to synthesise "inorganic versions" of enzyme active sites; for example, much work has been done on dinitrogen complexes in the hope of understanding the enzyme nitrogenase. Myoglobin and hemoglobin are not enzymes in the strict sense of the word,3 but the same technique applies: if stable $\ce{Fe(II)-O2}$ complexes could be synthesised, they might prove to be more amenable to experimental investigation.

Of course, Co(II) complexes do not necessarily have the same electronic structure as their Fe(II) counterparts, so such data can only be of limited use. The key to overcoming the early difficulties (of Fe(II) oxidation) was the fact that such oxidations tend to proceed via dimerisation; therefore, if a sterically hindered Fe(II) complex could be made, the oxidation could be prevented. Based on this, Collman and coworkers synthesised so-called "picket fence" complexes,7 which reversibly bound dioxygen, the concept of which is shown below: 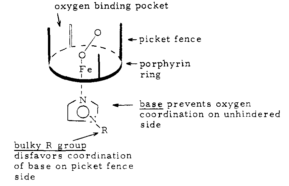 A controversy over magnetic data

It was realised that a key difference between the two schemes was in their predicted magnetic susceptibilities. For the $\ce{Fe(II)-O2}$ binding scheme, one would expect the compound to be diamagnetic at all accessible temperatures (to obtain a magnetic state would require electronic promotion). On the other hand, the $\ce{Fe(III)-O2-}$ binding scheme would be expected to have a temperature-dependent magnetic susceptibility, as antiferromagnetic coupling could be overcome with higher temperatures. In other words, there is a thermally accessible triplet state.

In 1977, Cerdonio et al. published a paper claiming to have observed a temperature-dependent magnetic susceptibility for $\ce{HbO2}$.9 However, their findings were refuted in a later 1984 paper by Savicki et al., which found that $\ce{HbO2}$ was in fact diamagnetic at all temperatures.10 The incorrect magnetic data was attributed to residual deoxyhemoglobin, which is paramagnetic, and in a private communication with Savicki, Cerdonio agreed that his earlier findings were in error.

Spectroscopic data on the proteins

Using infrared spectroscopy, the O–O stretching frequencies in both oxymyoglobin11 and oxyhemoglobin12 were identified as $\pu{1103 cm−1}$ and $\pu{1107 cm-1}$ respectively, again consistent with superoxide.

Furthermore, $\ce{^57Fe}$ Mössbauer spectra of $\ce{HbO2}$ showed large quadrupole splittings, which is consistent with iron being in the +3 oxidation state.13

Early quantum mechanical calculations by Karplus14 showed that the properties of $\ce{HbO2}$ could be explained by a mixture of two $\ce{Fe(II)-O2}$ resonance forms: one with both bonding partners in the singlet state, and one with both in a triplet state. The latter was actually put forth as a separate - third - model, most notably by Goddard in 1975.15

Of course, these are fairly primitive by today's standards. In 2008, Shaik et al. revisited the topic,16 and provided an overview of the numerous computational studies performed up until then, which had failed to reach a conclusion. Instead of trying to discern the appropriate bonding model from indirect parameters, such as the net charge on oxygen or the form of the occupied MOs, the authors opted to transform a CASSCF wave function into a generalised valence bond wave function. They concluded that the Weiss $\ce{Fe(III)-O2-}$ model was dominant for a gas-phase oxygen–heme complex, and that the interaction with the protein further reinforces the $\ce{Fe(III)-O2-}$ character of the wave function.

In an entirely separate endeavour, Gray and coworkers found that polyhalogenated iron porphyrins, which possessed unusually high Fe(III)/Fe(II) reduction potentials, did not bind to oxygen.17 This has been taken as evidence for the necessity of electron transfer from Fe(II) to dioxygen in $\ce{Hb-O2}$ binding, and hence the identification of the bonding as being $\ce{Fe(III)-O2-}$ charge-transfer in nature.

X-ray absorption spectra by Wilson et al. further complicate the matter, though. Firstly, their investigation of picket fence porphyrins led to the conclusion that these generally showed characteristics of both models, but were more in line with an Fe(II) description. The effective nuclear charge on iron was found to be closer to that of Fe(II) than to that of Fe(III), and the spectra lacked a low-energy transition characteristic of Fe(III) complexes (arising from the hole in the $\mathrm{t_{2g}}$ orbitals on iron).18

A further study on the protein itself revealed that crystalline $\ce{HbO2}$ mainly has $\ce{Fe(II)-O2}$ character, whereas solution $\ce{HbO2}$ has $\ce{Fe(III)-O2-}$ character.19 They therefore concluded that the bonding was multiconfigurational in nature, and that "secondary changes in the protein environment, crystal packing, and so forth, can tip the electronic structure in either direction".

Not the answer you're looking for? Browse other questions tagged biochemistry transition-metals oxidation-state proteins or ask your own question.

37
Why does carbon monoxide have a greater affinity for hemoglobin than oxygen?
9
What is "super" in superphosphate?
5
How to compare the bond lengths of an peroxide complex before and after oxidation?
6
Why don't ligands affect the oxidation state of the central metal ion?
4
Identifying a Positive or Neutral Ligand Inside Coordination Sphere?