Can the Smirnov-Zamkow reaction be described as a pericyclic process?

The Smirnov-Zamkow reaction involves the reaction of 2-butyne and chlorine in the presence of a Lewis acid catalyst to afford a dichlorocyclobutene: 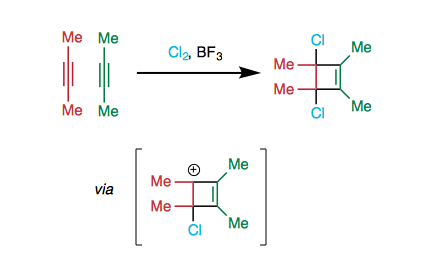 At first glance, it appears to be an example of a thermal [2+2]-cycloaddition, which, by the Woodward Hoffman rules is forbidden.[*] This either means that (1) the reaction is stepwise, or (2) the intermediates are able to arrange themselves such that both components are not reacting suprafacially.

Very few mentions of the Smirnov-Zamkow reaction appear in the literature. The only real description is found in Fleming [1] where the reaction is proposed to involve initial formation of an allene. All other references on the internet simply link back to Fleming, with no mention made of this reaction in March, Carey, or any of the other usual suspects.

Clearly the reaction isn't synthetically that useful, and its initial reports occurred before pericyclic reactions had been widely studied/rules existed governing what was 'allowed',[**] but it is a curious example, to which I can't (yet) convince myself is an allowed pericyclic reaction on the grounds of orbitals.

Can the Smirnov-Zamkow be satisfactorily described as a pericyclic process (i.e. can it be drawn in such a way as to obey the thermal Woodward Hoffman rules), or is it best described as a stepwise process?

[*]: The reaction was so strange that allegedly R.B. Woodward was left 'open-mouthed, with nothing to say' when he first read the report of the reaction taking place, under such 'mild' conditions, if a set of second year undergraduate notes are to be believed.

[**]: The reaction is actually referenced in Conservation of Orbital Symmetry by Woodward and Hoffman, they actually give a slightly different explanation to Fleming/the lecture notes I first encountered this reaction in.

I was going to write a comment, but I think this is good enough for an answer.

The issue that symmetry rules forbid a [2+2] thermal cycloaddition if the addition is suprafacial-suprafacial.

I'm not familiar with your exact example, but I am familiar with [2+2] thermal cycloadditions of ketene. It is thought to proceed via suprafacial-antarafacial additions.

Not the answer you're looking for? Browse other questions tagged organic-chemistry reaction-mechanism pericyclic or ask your own question.

110
Is there a general consensus on the causes of the alpha-effect?
10
Is ozone an electrophile in the ozonolysis reaction?
4
Is hydroboration a pericyclic reaction?
3
Pericyclic Reaction Mechanism
0
Application of the Woodward-Hoffman rules to a [14+2] cycloaddition (follow up)
24
Theoretical basis behind orbital correlation diagram for pericyclic reactions
7
Differentiating between Prins reaction / ene reaction experimentally