How to get Jmol to automatically determine and display bond order?

Some molecule file formats do not detail bond order and when I open these formats in Jmol implied (by the valency, of course) double bonds are not shown as double bonds but rather as single bonds. Is there a way to correct this behaviour? I tried to answer this question myself with a "calculate bond order jmol" DuckDuckGo search. It returned:

as the top three results. Not a single one mentioned something relevant. 3 seemed most relevant but it seems to talk about how to specify bond orders manually, not getting Jmol to automatically calculate them.

Bond lengths are shown in this screenshot: 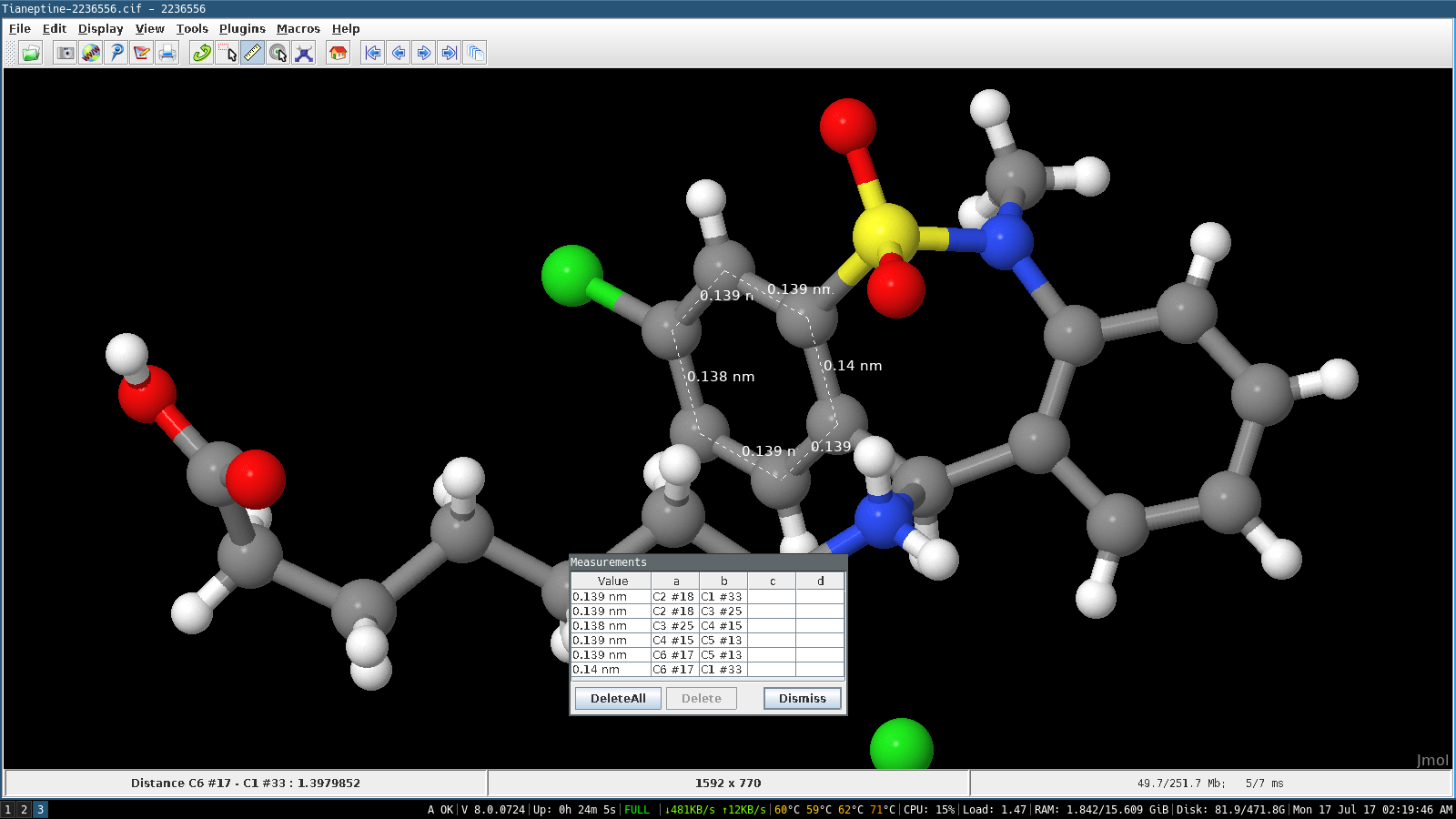 The file opened is http://crystallography.net/cod/2236556.cif which is tianeptine hydrochloride.

The current definition of the *.cif file does not care about bond order, rather than indicating connectivity of atoms within a molecule. This is why representing organometallic complexes (like ferrocenes) drawn in sight of what is important for a crystallographer may differ from the one drawn by an organo(metallic) chemist. Among other data, *.cif include the position of the (hopefully correctly assigned) atoms, but nothing about hybridization ($sp^3$, $sp^2$, ...) -- which is one reason why you offer a drawing of the molecular structure of your product to your crystallographer when it comes to characterization by single crystal diffraction or powder diffraction analysis. In the style of a the ball-and-stick representation, the above drawing is correct.

It is however possible to request Jmol to discriminate between single, double, triple bonds. One approach to solve such a question is based on tables which relate typical bond lengths to single, double, triple bonds. To document this, I used the data set indicated by you, as well as Jmol (version 14.13.1, 2017-04-09) under Xubuntu 16.04 LTS with openjdk version "1.8.0_131". As far as I know, one has to proceed manually, individually for each bond in question.

As a preparation, be sure that Jmol may calculate the bonds, the corresponding menu is accessible via edit -> preferences: 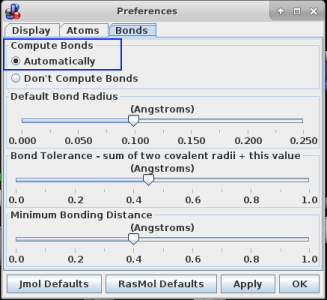 If the option previously was disabled, restart Jmol now. Subsequently, open your *.cif file and activate the model kit module 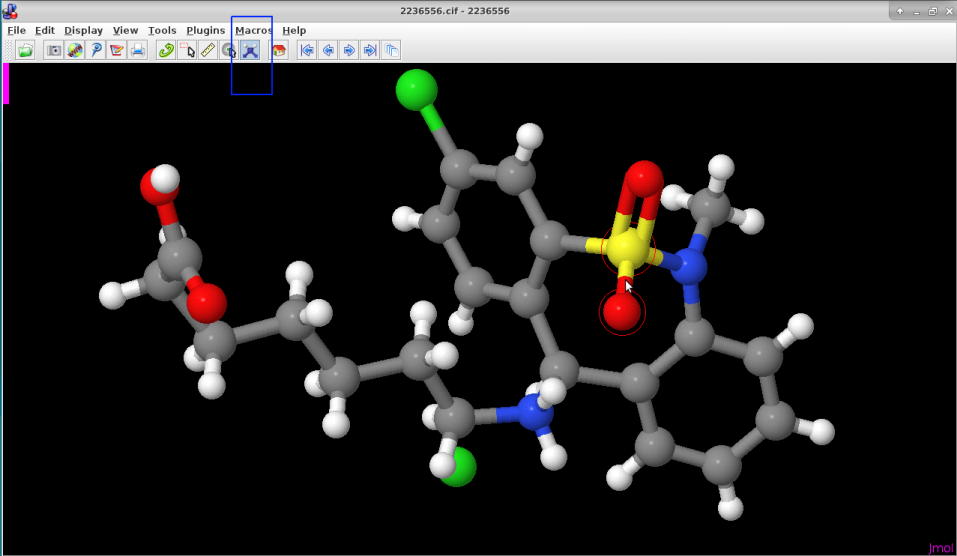 which will enable a little drop-down menu on the left hand side, marked by the ribbon in magenta. For now you do not need to access the options there, but hover the mouse over the first, subsequently over the second atom along the bond you are interested. You will see that first the first atom, then the second atom is encircled. If you now return hovering from the second atom in question to a position between the two atoms in question (and still on top of the bond in question), and left-click, the bond order may be recalculated, and its display will change if deemed suitable -- as shown in the example of the oxygen atoms of the sulfonamide.

This takes some practice, and frankly, the operator needs to stay vigilant. In the case of aromatic cycles, the model kit module may correctly recognize the $sp^2$ character of the carbon atoms, but on the expense of hydrogen atoms attached to it. Hence a result like the following may be expected, where I intentionally halted to "re-assign" the bond order on the last two carbon atoms of this cycle: 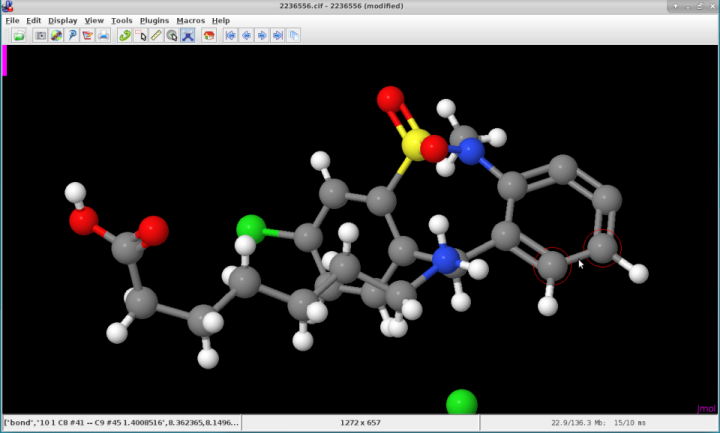 Be aware that if you left-click on one of the atoms in question, you may alter its designated element. In the following, I did so while tapping on the carbonyl oxygen of the acid residue: 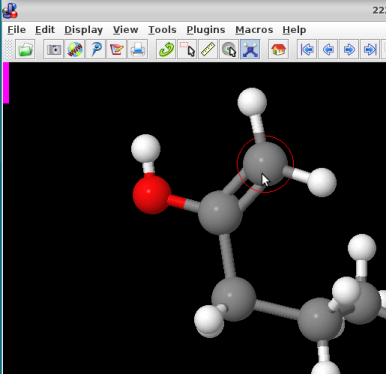 In such an instance, you should access the pull down menu of the model kit, and re-assign the atom type. Aberrant hydrogen atoms will be removed by this automatically, too: 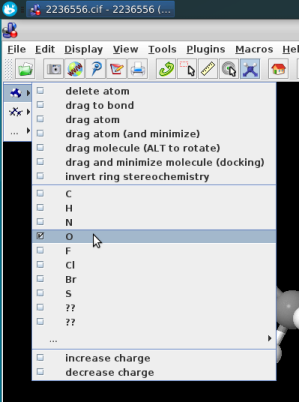 As Buttonwood stated, CIF is not the file format you would expect to preserve bond order within, and Jmol wiki suggests using other formats for that: MOL, MOL2, PDB, CML. I would like to propose a method involving a third-party tool that works out for me.

Not the answer you're looking for? Browse other questions tagged crystal-structure molecular-structure software cheminformatics or ask your own question.

5
Counting valency of atoms, in a molecule with python
4
How to determine the packing geometry of compounds with contradicting coordination number and radius-ratio values?
7
How to determine bond length and angle in a conjugated pi-system (polymethine)?
5
How to determine the Bravais lattice and atom basis vectors from a CIF file?
16
How do I create a spreadsheet containing the coordinates and predicted bond angles, molecular properties, torsion properties, etc of a molecule?
5
Convert CIF file to SDF file using free Linux-compatible software other than Avogadro or OpenBabel?
1
How to display ligands as ball and stick and macromolecules as cartoons (if protein) / rings (if nucleic acids) in Avogadro?