What effect does hydrogen bonding have on H NMR spectra?

My thinking is that an increase in electron density caused by hydrogen bonding should cause the chemical shift of participating atoms to be moved downfield. Am I right or wrong?

Can someone provide an example showing this phenomenon?

Hydrogen bonding is well known to cause large changes in chemical shift values– this is evident if you look up the chemical shift of an alcohol in a data-book (for an aliphatic alcohol this is anywhere between 0.5 and ca. 6.0 ppm depending on solvent/concentration), where a large range of values are given.[1]

In general, formation of hydrogen bonds causes shifts to move to a higher frequency (higher ppm) due to deshielding.[2] In itself this is counter-intuitive, as in a hydrogen bonding interaction the H is actually receiving electron density from the donor atom (and therefore should be shielded). In the case of NMR however, the actual electron density isn’t whats causing this, but rather the field set up from the presence of the interaction.[#]

Although hydrogen bonding does cause a change in chemical shift, it is often only evident (/causes an issue) with intermolecular hydrogen bonding (between two molecules). With intramolecular bonding, the system is sufficiently stable that the chemical shift of the proton is consistent (and doesn't change with concentration/solvent, much).

To give an example,[##] consider the 1H-NMR of methanol and hexafluoroacetylacetone:[3] 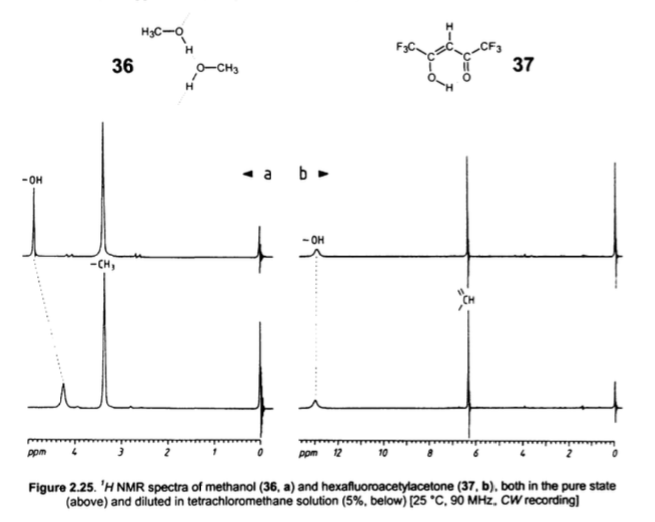 Hydrogen bonding in NMR may seem rather inconvenient (and indeed it can be in routine structure elucidation work where the shift keeps on moving depending on how dry the NMR solvent is on any given day), however it has played a vital role in biochemistry and supramolecular chemistry, where the change in proton shifts can be used to determine whether or not multiple components are interacting.

A classic example is the interaction between cytosine and guanidine (C pairs with G in DNA via a hydrogen bonding interaction), which can be observed by NMR when the two compounds are mixed in an equimolar ratio: 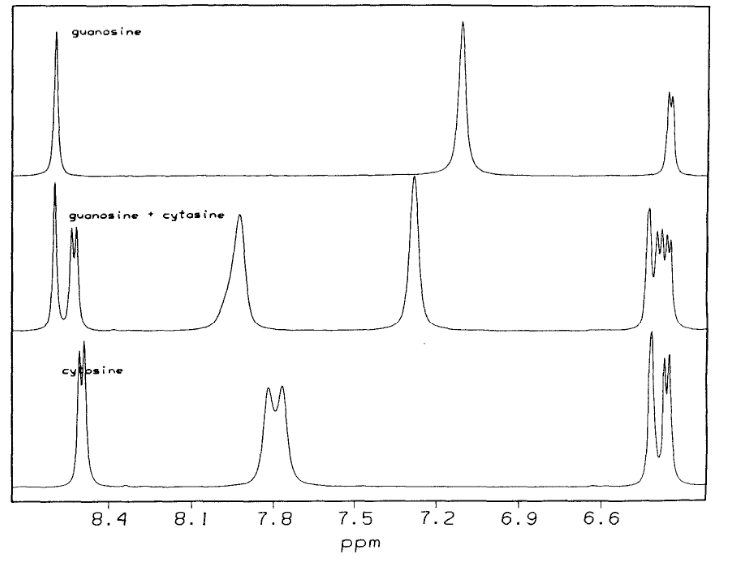 [#]: This is covered in Spin Dynamics by Levitt if you have any interest in the theoretical reasoning behind this

[##]: In this other answer, i’d previously given the example of salicaldehyde, which shows a consistent intramolecular H-bond free from solvent/concentration effects

Not the answer you're looking for? Browse other questions tagged experimental-chemistry nmr-spectroscopy or ask your own question.

4
Is there intramolecular hydrogen bonding in salicylaldehyde?