The six electronic configurations below could all be found in the matrix elements of the CI matrix at CISD level. How do I construct the 6 x 6 CI matrix composed of these six configurations and which of the elements will be zero? How different would it be if I used MP4(SDTQ) method? 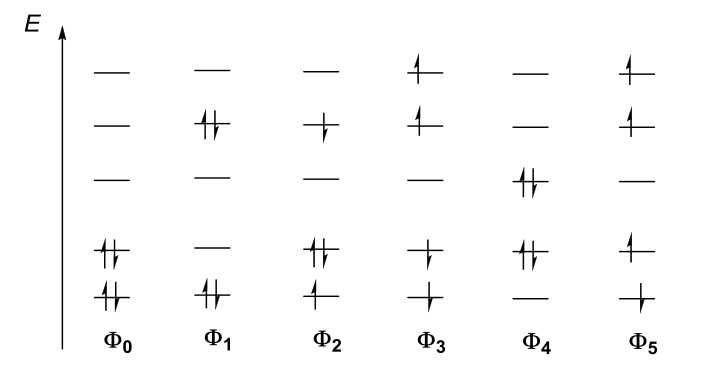 For example, say column one corresponds to $\psi_0$, or $\left|0\right>$ in bra-ket notation. Similarly, row one corresponds to $\psi_0$, or $\left<0\right|$ in bra-ket notation. The CI matrix element where these coincide, namely $\left<0|H|0\right>$, where H is your Hamiltonian, is simply the ground state energy (the Hartree-Fock energy, if the configurations are the result of HF orbitals). The other matrix elements, like $\left<1|H|0\right>$ or $\left<0|H|2\right>$ have rules for determining them. The best reference is the book Modern Quantum Chemistry, by Szabo and Ostlund. Dr. David Sherrill has a good reference as well, which you can find here: http://vergil.chemistry.gatech.edu/notes/ci/ci.html

Okay, to answer the second part of your question. There are a few rules for determining CI matrix elements. One of the first ones is that singly excited configurations do not mix with the ground state. This is Brillouin's theorem. I don't see any singly excited configurations in the six you gave, so we won't have any of those. The other rule is that configurations that differ by more than two orbital occupations are zero. Since you truncated to doubles, you also won't have this case. The other thing you need to check is spin. If spin is not conserved, you'll have a zero matrix element. I think you'll have this case with the first configuration and the last one, which have different multiplicities.

As to your last question, I'm not real sure what you are asking. MP4(SDQ) is a perturbative method, which is different from CI, which is a variational method. In other words you do a CI by diagonalization, whereas MP4 is not. So I think CISDQ would be a better question...anyway, the point is that you are increasing your configuration space from singles and doubles (SD) to singles, doubles and quadruples (SDQ). The point I made in the preceding paragraph still holds, and expressing your Hamiltonian between ground state and quadruply excited configurations will be zero because their occupation differs by more than two. Same for singly excited configurations and quadruples.

EDIT: Just had the thought, you should also search for "Slater's rules" when trying to construct CI matrices. These are the rules I mentioned earlier.

Not the answer you're looking for? Browse other questions tagged computational-chemistry electronic-configuration theoretical-chemistry or ask your own question.