My copy of Pearson's Organic Chemistry (7e), Morrison and Boyd, under the section "Reaction intermediates", accords a succinct description on the structure of carbocations:

The central $C$-atom (of carbocations) is in an $\mathrm{sp^{2}}$ hybridized state, for which the carbocations have planar geometry. The $\mathrm{p_{z}}$-AO (atomic orbital) remains empty.

The stuff in parentheses was added by me

Aided by this description, I conjured up the following "general" structure of carbocations: 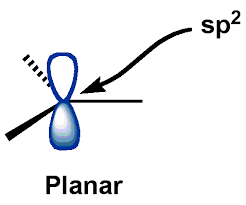 Though I pulled out the above image from Google Images, it was pretty much the same structure I've been visualizing this whole time...drawing my own would be messy

And as you can see, I've equated the "planar structure" mentioned in the book to "trigonal planar structure" (with an axial vacant $p$ orbital). This image of a carbocation's structure in mind proved rather handy, and didn't seem to be incorrect at all.

Wikipedia, on the other hand, doesn't sound so confident about the central $C$-atom's $\mathrm{sp^{2}}$ hybridized state.

As you can see, Wikipedia doesn't appear to (completely) endorse the $\mathrm{sp^{2}}$ structure of the central $C$-atom.

I continued to keep the "trigonal planar" structure of carbocations in mind while studying them. This posed no hindrance until, I came across these carbocations (in a book not really worth mentioning):

1) Issue with the Aryl carbocation

I visualized this as a particular Kekule structure of benzene having lost one hydrogen anion, thereby leaving a positively charged carbon atom in the ring. Considering the bonds involving the positive $C$-atom (in the particular Kekule structure I put up), I see two $σ$ bonds and one $π$ bond. Also, the $\mathrm{C=C^{+}-C}$ bond angle appears to be $\mathrm{120^{o}}$ (just like the normal benzene molecule. I honestly can't figure out the hybridization or structure/geometry of the positive $C$-atom here. I guess I should factor in the "delocalization of the positive charge" across the ring, but that hasn't borne fruit (for me).

2) Issue with the vinyl carbocation

I visualized this as an ethene molecule, having lost one hydrogen anion, thereby leaving a positively charged carbon atom (seen on the right end in the image). Here again, I see two $σ$ bonds and one $π$ bond. From my knowledge of the VSEPR theory, I suppose the $\mathrm{C=C^{+}-H}$ bond angle is $\mathrm{180^{o}}$ (i.e- linear). But I can't for the world figure out what the hybridization of the positive $C$-atom here, is. Heck, I'm not entirely sure if I predicted the geometry (linear) correctly in the first place...well, this case is alien to me.

3) Issue with the ethynyl carbocation

I visualized this as an ethyne molecule, having lost one hydrogen anion, thereby leaving a positively charge carbon atom (seen on the right end). Considering the bonds involving the positive $C$-atom, I see one $σ$ bond and two $π$ bonds. Hybridization? No clue. Geometry about the positive $C$-atom? Um...kinda looks like a ball at the end of a stick...not sure if there's any "angle" present ._.

Could someone please address these "issues" I've encountered for the above mentioned (aryl, vinyl, ethynyl) carbocations? I'm not sure if assuming "planar" structure" necessarily means "trigonal planar structure"... or if there's something about "hybridization" that I've grossly overlooked.

[Note- What I've been taught, is that a particular hybridization state, ensures a particular geometry/structure....the result of trying to combine "Hybridization" with the VSEPR theory]

1) What is the hybridization state of the carbon atom carrying positive charges in the three examples I've used above? How is it determined?

I'm still in High-school, so I feel a bit overwhelmed at the moment (trying to wrap my head around this...hopelessly)

I actually have a (or many) big issue(s) with the quote:

The central C-atom is in an sp2 hybridized state, for which the carbocations have planar geometry. The p$z$-AO remains empty.

The authors here have clearly scrambled up their reasoning, making carbocations seem as something they are definitely not. Suffice to say (tl;dr) the above statement cannot be true. Let's get a few points straight before moving on to a more complex examples.

Just because of Bent's rule it is only logical to assume that carbocations in general may differ significantly from the often taught 3×sp2 + p hybridisation scheme. In principle, only carbocations of the form $\ce{^+CR3}$ are symmetric enough to have this scheme. This already starts to break down with $\ce{R{ = }CH3}$ because of hyperconjugation. In first approximation, however, the convenient model holds. Just keep the limitations in mind.

I personally dislike the terminology and the definition in the gold book, as I find it a little reactionary, but we're stuck with it, there is no use in complaining.

nonclassical carbocation
A carbocation the ground state of which has delocalized (bridged) bonding π- or σ-electrons. (N.B. Allylic and benzylic carbocations are not considered nonclassical.)

Note for the remaining part of the answer I am keeping things short as I am just summarising stuff from two sources on our network: (1)Do vinyl cations adopt a classical or non-classical structure? (2) Is the phenyl cation or ethynylium more stable?

Throw out the restrictive thinking of hybridisation. It is almost always useless when it comes to carbocations (best case scenario) or even gives you the completely wrong ideas. Always remember that orbitals can be described hybridised, but not atoms, and that hybridisation itself is never a fixed deal.
Always keep in mind that the smallest molecular entities do the weirdest things, with the most complicated bonding situations.
Stay open-minded.

That notion is far from true. There are many examples of carbocations where, through the use of delocalized bonds, carbon can be bonded to five or more atoms. See, for example, https://en.m.wikipedia.org/wiki/Carbocation. Among other things, this shows that even methane can be protonated to give not $\ce{CH3+}$ but $\ce{CH5+}$!

Not the answer you're looking for? Browse other questions tagged organic-chemistry molecular-structure hybridization vsepr-theory carbocation or ask your own question.

92
What is Bent's rule?
36
What is a non-classical carbocation?
26
Do vinyl cations adopt a classical or non-classical structure?
15
Utility of Bent's Rule - What can Bent's rule explain that other qualitative considerations cannot?
8
Is the phenyl cation or ethynylium more stable?
6
Stability of a carbocation, in part of camphor synthesis

56
How do I figure out the hybridization of a particular atom in a molecule?
9
Why an asymmetric geometry with sp3d and sp3d3 hybridization?
0
Why can't oxygen in furan be sp-hybridized?
2
Molecular Orbital Hybridization vs Delocalization for positive charge stabilization