How would the “-COOCl” functional group be named?

I had this question that has been bouncing around for over 2 years.

Basically, I imagined this molecule: 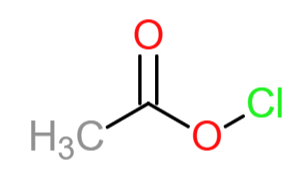 This molecule, as far as my former (and current) knowledge of nomenclature goes, couldn't be named by me. At first, when I was in about 11th grade, I used to call it ethanoyl chloride, but that's $\ce{CH3COCl}$, not $\ce{CH3COOCl}$. I then thought of chlorine ethanoate, but that's ridiculous too, since chlorine can accomodate the negative charge way better than what ethanoate can.

I looked up a while, and I found out that the $\ce{-OCl}$ group is called a hypochlorite group, that gave rise to my third guess ethanoyl hypochlorite. However, I am not very sure about that either, since ethanoic acid isn't called ethanoyl hydroxide, and methylmethanoate isn't called methanoyl methoxide.

So, what would the "-COOCl" group be called?

One could be tempted to name this compound as acid halide of a peroxycarboxylic acid (here: ethaneperoxoic acid). However, the compound could also be named as anhydride of acetic acid and hypochlorous acid. Note that anhydrides have a higher priority in the seniority order for classes than acid halides.

And indeed, the current version of Nomenclature of Organic Chemistry – IUPAC Recommendations and Preferred Names 2013 (Blue Book), mentions that hypochlorous acid forms anhydrides such as benzoic hypochlorous anhydride. The rule for the formation of such names can be found in Subsection P-67.1.3.3:

Neutral anhydrides formed between acids named by suffixes and mononuclear noncarbon oxoacids described in P-67.1.1 are named in the same way as described for anhydrides derived from carboxylic and the sulfur acids named by suffixes (see P-65.7). The names of the acids are cited in alphabetical order followed by the class name ‘anhydride’ prefixed by a numerical term indicating the number of anhydride linkages (the numerical prefix mono is not used); such names lead to preferred IUPAC names. (…) Halogen oxoacids form anhydrides with carboxylic and the sulfur acids expressed by suffixes.
(…)

Therefore, the preferred name for the compound that is given in the question is acetic hypochlorous anhydride.

Not the answer you're looking for? Browse other questions tagged organic-chemistry nomenclature carbonyl-compounds halides or ask your own question.

5
Is there a systematic naming system to name carbonyl derivatives?