What is the mechanism behind the decomposition of enediol phosphate intermediate to methyl glyoxal?

I can't seem to figure out the mechanism for the decomposition of enediol intermediate (in glycolysis) to methyl glyoxal? How does the phosphate group get replaced by a hydrogen?

This reaction can occur only when the $\ce{C-O}$ bond to the phosphate group lies in a plane that is nearly perpendicular to that of the enediol so as to permit the formation of a double bond in the intermediate enol product.

In solution, the enediol intermediate readily breaks down with the elimination of the phosphate at C3 to form the toxic compound methylglyoxal: 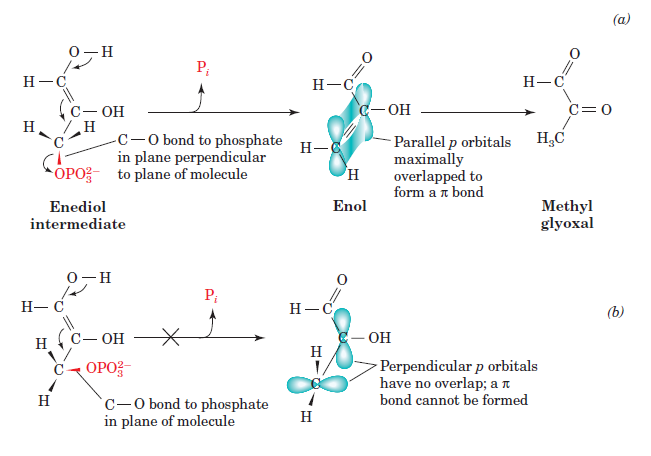 The spontaneous decomposition of the enediol intermediate in the triose phosphate isomerase (TIM) reaction to form methylglyoxal through the elimination of a phosphate group.

In order for this elimination to occur, the bond to the phosphate group must lie, as shown above (a), in the plane perpendicular to that of the enediol.

This is because, if the phosphate group were to be eliminated while this bond was in the plane of the enediol as shown in (b), the $\ce{CH2}$ group of the resulting enol product would be twisted 90° out of the plane of the rest of the molecule. Such a conformation is energetically prohibitive because it prevents the formation of the enol’s double bond by eliminating the overlap between its component $\mathrm{p}$ orbitals.

14
What's the mechanism of the reaction of (E)-methyl 3-(furan-2-yl)acrylate in acidic methanol?
1
Drawing (R)-1,1,2-trimethylcyclohexane
4
How does this brominated intermediate lose its methyl group?
4
Phosphoglucose isomerase mechanism
1
Mechanism of the reaction of cyclohexanone and nitric acid to form Adipic acid
4
How is laughing gas produced in the Nef reaction?
1
Does the reaction of 2‐hydroxy‐6‐methyl‐5‐nitrocyclohepta‐2,4,6‐trien‐1‐one with NaOH involve ring contraction?
1
What is an alternate way of preparing a sodium hydrogen phosphate/sodium dihydrogen phosphate buffer through titrating an acid with a strong base?