How to read a given chemical formula?

I'm trying to read this chemical formula but I'm a bit confused. I'm hoping that someone could help break this down for me to explain what the various parts mean. Someone purchased epigallocatechin in a purchase request and I found that it's synonymous with the following.

I believe that the minus up front refers to the way that the polarity changes as light passes through the molecule. What does the 3,4,5 refer to and the 2?

Klaus's answer has all the right explanations but I always find these things hard to follow without pictures, so here are some to clarify.

Note that in the pictures below we don't explicitly draw carbons or the hydrogens attached to them (we just mentally add enough hydrogens to make the number of bonds to each carbon equal 4).

The two numbers on the first structure tell us where the oxygen appears in the pyran ring and where the saturated carbon (with an extra hydrogen) appears. Both could be in different places. The second picture showns the numbering convention for each atom in the ring so we can keep track of where anything else is attached. The third picture shows what happens if we notionally add extra hydrogens on carbons 3 and 4 to give a fully saturated ring.

Now we add an OH (hydroxy) in certain positions:

The picture on the right shows how we number the parts of trihydroxy phenyl when it is attached to something else (it will be stuck on the 2-carbon on the benzopyran in the final compound).

Finally we have the epigallocatechin:

The "cis" indicates that the two hydrogens (mentally fill them in in positions 2 and 3) are on the same side of the benzopyran (the opposite side to the two wedge-like bonds on the OH and phenyl groups).

I hope that all makes some sort of sense. Note that none of the above bears any relation to how the molecules are made: this is all notional deconstruction for the purpose of explaining how the molecule is named.

In addition to what ssavec already outlined:

cis refers to the relative stereochemistry of the substituents at C2 and C3 of the benzopyran, which is the core structure (and thus name-giving) of the title compound.

This tells us a lot!

3,4,5 are the locants of phenolic OH on the trihydroxyphenyl substituent and 2- is its position on the 1-benzopyran. 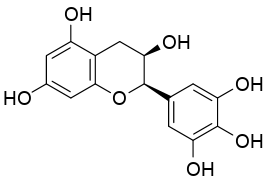 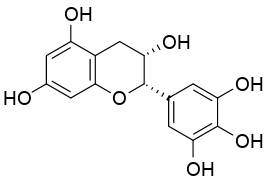 (or their mixture), so the (−)-cis-… is to denote the single enantiomer. However the optical rotation orientation is not obvious from the structure without experimental data, so structure-only based name would better use R/S stereodescriptors denoting the absolute configuration of the provided structure (first one), (2R,3R)-…, but it's OK (but rather redundant) to add the optical rotation based descriptor as well, (−)-(2R,3R)-…

Also note the other, nicer, name from the linked page (stereochemistry omitted),
3,3’,4’,5,5’,7-hexahydroxyflavane, which is the semi-systematic flavonoid name. Flavane is 2-phenyl-3,4-dihydro-2H-1-benzopyran (note slight change around ‘H’ in contemporary preferred names). Unprimed numbers are for benzopyrane ring, primed ones for phenyl.

Not the answer you're looking for? Browse other questions tagged nomenclature identification or ask your own question.