How to predict a COSY NMR spectra for an AMX spin system?

Does anyone know how to draw (predict) a hypothetical COSY NMR spectra for AMX spin system (the spin of A M X nuclei is 1/2)?

An AMX spin system represents three nuclei coupled to each other, with their signals separated by a large chemical shifts compared to the coupling between them (such that $\Delta \delta >> 3J$). This system is said to be first-order, and the A, M and X signals are each a doublet of doublets, and the couplings can be extracted by inspection.

The simple COSY spectrum of this will show the three core signals along the diagonal, with cross peaks appearing for all signals ie each signal will have two cross peaks. Below is a (very basic) schematic for an AMX COSY. 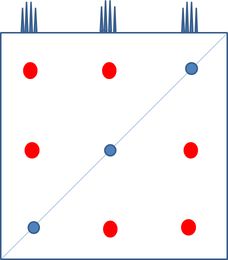 The appearance of the cross peaks will depend on the type of COSY experiment you are running, such as a COSY-45 or COSY-dqf etc, but this should give you the general picture for what you are asking.

2
How to construct NMR spectra from chemical shift tensors?
4
Naming the spin system present in ethyl butanoate
13
Comparison of COSY and TOCSY for detection of small couplings between protons
13
Qualitative explanation of how COSY works
5
How does the presence of various NMR active nuclei in a compound affect coupling and signal multiplicity?
1
Predict NMR spectra from the Mass Spectrometry
1
The type of H-NMR spectra observed for S=PF2H and other inorganic molecules similar to this