Charcoal (although activated carbon, a specially processed microporous charcoal product is better) is a material that is mostly carbon. The black allotrope of carbon is graphite, which is made of overlapping planar sheets of graphene. Graphite is very nonpolar (since it has only carbon atoms). Thus, nonpolar substances will adsorb. Most organic substances impurities are nonpolar substances (though not all, for example, sugars). Additionally, the graphene sheets are aromatic. The ring current generates a dipolar magnetic field and a quadrupolar electric field that attract other aromatic substances through $\pi$-stacking. Thus graphite is best at removing aromatic substances, which include all organic dyes. Carbon filtering can also remove contaminants like chlorine, although this is likely a reaction leading to chlorination of the surface.

Silica $(\ce{SiO2})$ and alumina $(\ce{Al2O3})$ are polar materials. They are polar for three reasons. 1) They are composed of polar $\ce{Si-O}$ and $\ce{Al-O}$ covalent bonds. 2) The geometries of these minerals especially around the oxygen atoms are not perfectly in-line with VSEPR predictions, so polarity is not canceled by symmetry (see the silica unit image below). 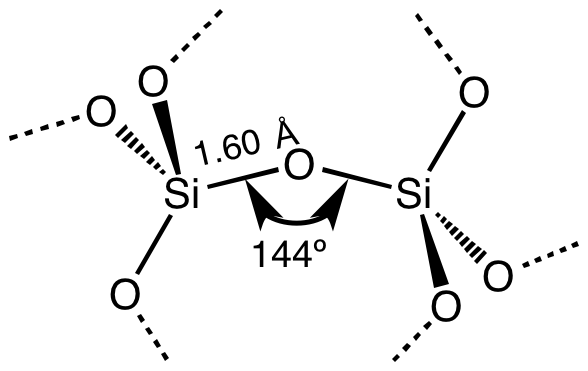 3) Both materials are hygroscopic and absorb/adsorb water from the atmosphere. The $\ce{Si-O-Si}$ and $\ce{Al-O-Al}$ covalent network on the surface is partially hydrolyzed so that the surfaces of these materials actually present $(\ce{-OH})$ groups, increasing the polarity of the surface. Polar substances are attracted to silica and alumina by dipole-dipole interactions and hydrogen bonding.

16
Why is Charcoal such an excellent adsorbent?

6
Why is Cyclodextrin cavity hydrophobic?
4
Does adsorption occur between liquids?
2
Does glass adsorb methanol to an exceptional extent?
13
Reaction mechanism in fluoride adsorption to aluminum oxide
2
Why does the BET equation take into consideration a multimolecular-layer, even though it deals with chemisorption?
6
Why does Freundlich adsorption isotherm not have a term for surface area?
0
Is activated charcoal an air purifier?