Would it be possible to produce a non-toxic atmosphere using a coal fire and frozen oxygen?

A Pail of Air is a classic science fiction short story by Fritz Leiber from 1951 describing how a family survives on an Earth that has left its orbit around the sun, using desparate low-tech methods: a shelter isolated by many layers of blankets and a coal fire to thaw frozen oxygen gathered in the eponymous pails.

I am curious how realistic this scenario is from a basic chemistry and biology perspective. I think not for a number of reasons, but don't know enough to quantify these factors:

Okay, so after doing some serious number crunching and searching for literature values all over the web, I've come to the following conclusion: Yes, it is possible to survive in these conditions!

First, let us examine the plausibility of the environment which is described in the short story. Outside the safety of the living space, cordoned off by 30-or-so blankets, lined with aluminium foil, there is a vacuum, and all of the gases in the atmosphere have frozen out and precipitated onto Earth's surface. The exception is helium, which still is liquid. If we check the phase diagram of oxygen (note that in the figure below we would have to look at the pressure of 0.001), we see that indeed it is possible:

So we need $150~\mathrm{mol}$ of gas constantly in order to maintain pressurization at the desired temperature. Whether 30 heavy rugs really can do that I'll leave to an experimental physicist.

The fire isn't the only source of oxygen depletion, also the humans inhabiting the small space will use oxygen. Using this data, an average adult human being will consume $22.5~\mathrm{mol}$ $\ce{O2}$ per day. So we'll round this to $70~\mathrm{mol\, d^{-1}}$ for the whole family (2 adults, 2 kids). This is already corrected for oxygen exhalation, so the system generates an equal amount of $\ce{CO2}$.

The only source of oxygen is the pail above the fire, in which the solid oxygen gets heated up to the boiling point (which, at 20 kPa is 77.1 K, see figure below; data source: NIST) and then further to ambient temperature. 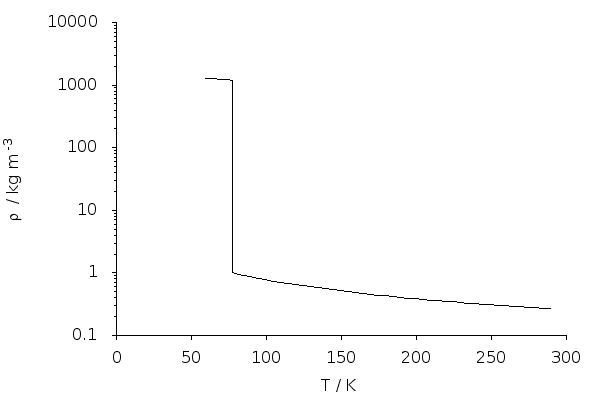 Using the formula given in the paper Calculations of the Heat Release Rate by Oxygen Consumption for Various Applications I end up with $\dot{V} = 0.177~\mathrm{m^3\, d^{-1}}$, for a oxygen depletion coefficient of $0.8$ in a pure atmosphere of oxygen ($x_\mathrm{\ce{O2}}^0 = 1$, standard pressure is assumed in the formula). This is about 1% of the total volume in the cove, and is also only needed for the initial pressurization. However, since the inhabitants also produce $\ce{CO2}$ at non-negligible levels, and the concentration of said gas should stay under 2% for normal breathing and to avoid the feeling of dizziness, we need to up the oxygen generation rate.

It is inevitable that the exhaust gases from the fire should be led out via the chimney (that is also described in the story) without great mixing with the air in the room. But all in all the heat generation is possible (the oxygen needed to heat the 4700 mol to the temperature is only 46 mol), thus making it a survivable climate.

By the above estimation-based calculations and considering the limitations, I conclude that it would indeed be conceivable to survive in these conditions.

Yes, it is possible to produce a non-toxic atmosphere using a coal fire and frozen oxygen.

No, low pressure oxygen will not make flammability worse, fires require something to bond with oxygen (often carbon, causing carbon dioxide). Low pressure will make things less flammable as there is less oxygen to bond with.

Yes, using an open coal fire in a semi-enclosed space will gain toxic levels of carbon dioxide, carbon monoxide and sulfur dioxide (among a few others) quickly. However with a minor modification from a open fire to a fire in a old fashioned chimney pipe stove (venting outside the hut) would eliminate this.

Lastly, Definitely Yes, a coal fire will produce more than enough energy to thaw the oxygen it uses. To quote figures 1 pound of coal will produce roughly 12,500 btu's (British Thermal Units) Assuming the temperature of the frozen oxygen we are thawing is -455°F (the "temperature of deep space") and about 3 degrees below the freezing temperature of helium. To thaw 1 gallon of the frozen oxygen will require roughly 900 btu's (if your stove has a 80% efficiency) and produce 860 gallons of pure oxygen at 80°F and atmospheric pressure. Coal will consume 140% of it's weight in pure oxygen, so for 1 pound of coal 135 gallons of your oxygen will be consumed. Leaving you with 11,500 btu's extra heat and 725 gallons of oxygen. The average Human consumes 25 gallons of oxygen per day making this plenty to survive on.

No, it would not be possible to use a coal fire and frozen oxygen to create a atmosphere able to sustain life for any prolonged amount of time.

Liquid oxygen, though not explosive or flammable by itself, would mix with the soot given off by the coal fire and create a highly explosive mixture.

Also, a coal fire gives off a toxic amounts of carbon dioxide, and potentially other gases. Not to mention the soot, which would quickly suffocate anyone breathing it in.

Not the answer you're looking for? Browse other questions tagged redox biochemistry or ask your own question.

4
How to write the redox reaction of chlorate to chlorine and oxygen using half rections?
1
Would decomposition take place in an atmosphere without oxygen?