Manganese dioxide catalyzes the decomposition of hydrogen peroxide to water and oxygen gas.

But what are the intermediates in this catalyzed reaction?

As Watts et al. have shown, the decomposition products of this Fenton-like reaction strongly depend on the $\mathrm{pH}$ of the solution.1

Do et al. have conducted further research into the reaction mechanism at $\mathrm{pH}=7$ and concluded that the observed reaction order may be approximated as a pseudo 1st order reaction, where the ratio $\ce{[H2O2]}/\ce{[#MnO2]}$ is vital to the description of the decomposition rate.2 They have further shown that reactive intermediates, such as superoxide and hydroperoxide anions are generated by the reaction. After slightly modifying the pH towards alkaline conditions, the production rates for the reactive anions increased drastically.

Do et al. have meticulously assembled a table with a proposed reaction pathway: 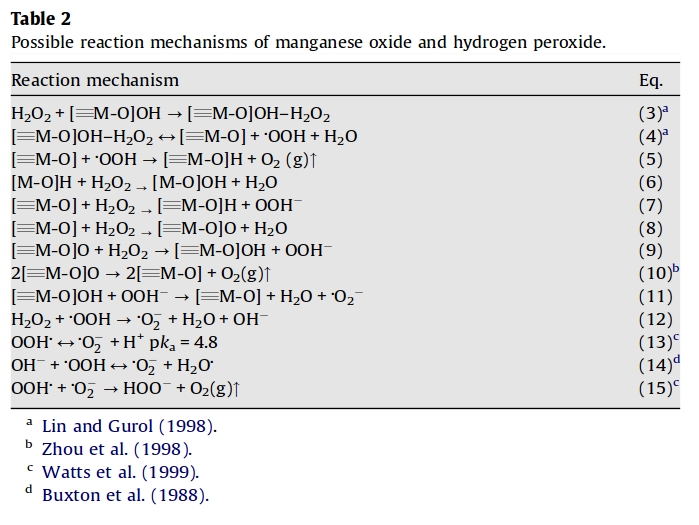 And finally, I quote one of their closing statements:2

I am adding a more recent study to complement the answer given by tschoppi. This journal addresses the kinetics and mechanism for the decompostion of $\ce{H2O2}$ on transition metal oxide surfaces. However, the paper only considers $\ce{ZrO2}$, $\ce{TiO2}$, $\ce{Y2O3}$. Although $\ce{MnO2}$ is also a transition metal oxide, $\ce{MnO2}$ may be different enough to lead to different paths or kinetics. The authors even state:

effects such as solution pH, type of oxide, temperature, and oxide particle size have profound effects on the kinetics and energetics of this type of reactions

Thus, take the results of the study with a grain of salt. I will focus more on the mechanism part of the journal. According to the journal

The kinetic experiments on the decomposition of $\ce{H2O2}$ together with the experiments on $\ce{HO•}$ detection show the existence of an adsorption step prior to decomposition. This type of process is also predicted with the DFT calculations. The decomposition of $\ce{H2O2}$ follows a similar mechanism for the three metal oxides studied. The obtained transition states are largely mediated by hydrogen bonding between $\ce {H2O2}$ and surface $\ce{HO}$ groups. Nevertheless, direct interaction between the oxygen atoms of $\ce{H2O2}$ and the metal atoms present in the oxide was also observed in the geometries of the transition states. The formation of two $\ce{HO}$ radicals as the primary product of the decomposition of $\ce{H2O2}$ is confirmed with both the DFT calculations and the experiments. One of these radicals can further abstract a $\ce{H}$ atom initially bound to a surface $\ce{O}$ and form $\ce{H2O}$. The other $\ce{HO}$ radical can adsorb to the surface by forming bonding states with the metal cation. 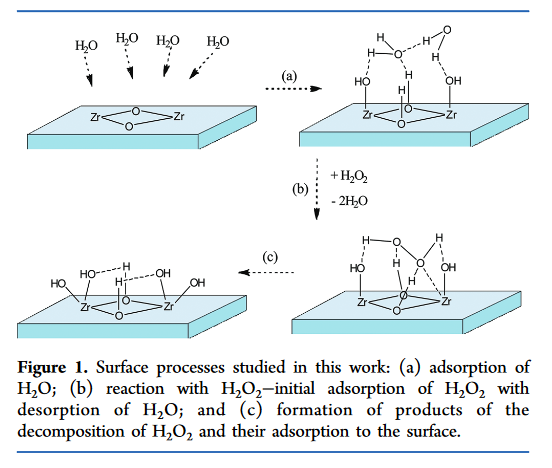