I am an immunology master student without prior knowledge of biochemistry.

Could someone explain to me the following 6 reactions?

What I want to understand is why exactly the reactions happen at this site ( in terms of donor/acceptor ). What is the donor, what is the acceptor? 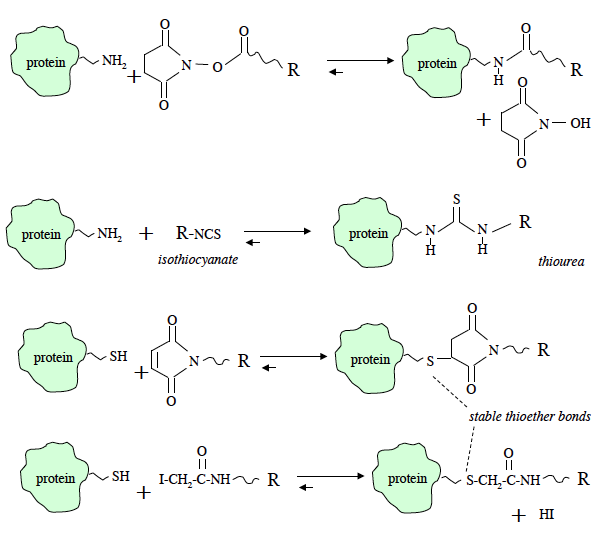 organic-chemistry biochemistry proteins
Share
Improve this question
edited May 19 '21 at 8:13

All reactions you gave are typically used in protein labelling, e.g. with fluorescent probes.

In order to allow further measurements on the labeled protein, the following conditions have to be met:

The bonds formed have to be stable like the peptide bonds in your protein. You don't want the probe flying around somewhere.

Proteins tend to be a bit sensitive to degradation; boiling in acetic acid is obviously not an option to run the labeling. As a consequence, the functional group to be attached needs to be activated, e.g. with good a leaving group, to allow the labelling of the protein under mild conditions. The succimidyl ester in the first reaction is a good example.

Not the answer you're looking for? Browse other questions tagged organic-chemistry biochemistry proteins or ask your own question.

1
Determination of a chemical compound in a non-homogeneous sample
14
Gattermann-Koch Reaction with Phenol Substrates
3
Why does a protein crystallize with a specific salt but not with another?
21
Why do some chemical reactions require many steps?
3
Can glucose and insulin exist in the same container without reacting?