This third round of golf concerns the synthesis of chloramphenicol 2,2-dichloro-*N*-[(1⁠*R*,2⁠*R*)-1,3-dihydroxy-1-(4-nitrophenyl)propan-2-yl]acetamide, an antibiotic on the World Health Organisations list of essential medicines:

In addition to being a useful target, chloramphenicol was chosen as during previous rounds of synthesis-golf, several people commented that they'd like to see targets amenable to biosynthetic transformations, and scaleable process routes. This target very much fits both of those criteria (the drug is manufactured on a huge scale, and several enzymatic routes have been developed).

The challenge is to propose a route to chloramphenicol, including a method for setting the absolute and relative stereochemistry of the 1,2-hydroxyamine functionality. You may start from anything commercially available in the Sigma Aldrich catalogue, but to keep things interesting, no starting material may contain more than 8 carbon atoms.

The approach taken in this proposed synthesis of chloramphenicol is largely based on Greene's synthesis of paclitaxel, using dihydroxylation methodology proposed by Sharpless.

Whilst not particularly elegant (I was hoping for some kind of asymmetric hydrogenation to set the stereocentres), it does get to the product in a respectable 7 steps (including setting both stereocentres, as required), and avoids having to introduce protecting/directing groups at any stage. 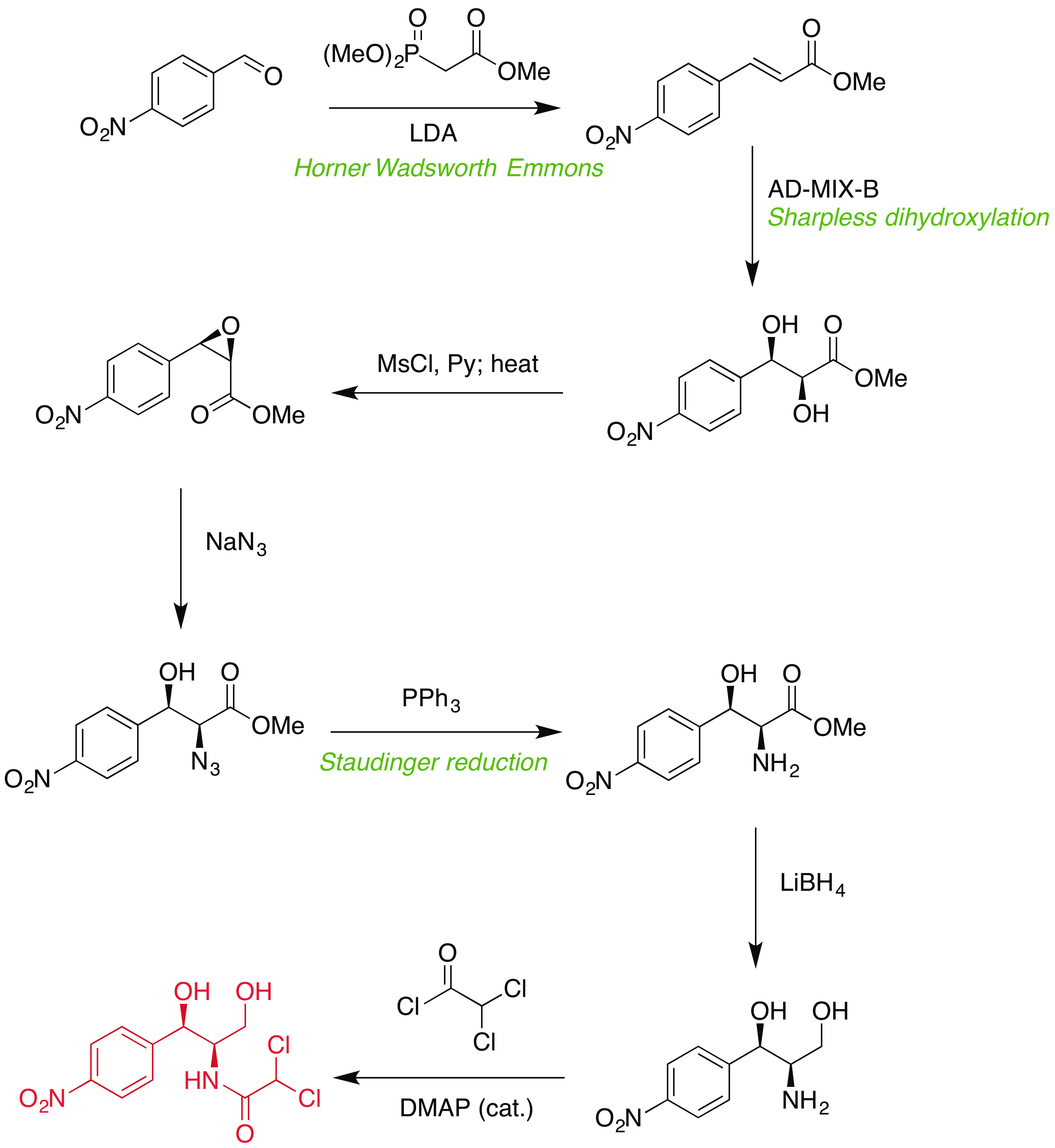 The first step in this proposed synthesis is a Horner Wadsworth Emmons olefination to introduce the (E)-alkene required for the planned dihydroxylation. Without the nitro-group, the exact reaction has been done many times and with good selectivity, so no reason to assume that this HWE would be particularly challenging (the nitro group clearly makes the aldehyde electron poor).

With the (E)-alkene formed, a Sharpless asymmetric dihydroxylation can take place using AD-MIX-B (taking the aryl group as 'large' and the ester as 'medium'). This step (without the nitro) is present in the Greene paclitaxel synthesis (above) and initially gives 82% e.e, though a single recrystallisation of the product brings this up to >95%.

In the paclitaxel synthesis, the epoxide is opened with sodium azide at the benzylic position (expected, the aromatic ring can stabilise the developing partial positive charge here), however in our case, we have an incredibly electron withdrawing nitro group in the 4-position, completely shutting down any stabilisation at the benzylic position.

Based on this lack of benzylic stabilisation, we could reasonable assume that it will take place with the opposite regioselectivity to the paclitaxel case. There is some evidence for this in the literature, (including where there is an ester present on the other side, but sadly not using azide as the nucleophile), and a cursory flick through an organic textbook will tell you that SN2 adjacent to carbonyls is generally fast.

Assuming it works fine, a Staudinger reduction converts the azide to the secondary amine with retention of stereochemistry.

Lithium borohydride is a mild and selective reagent, able to reduce esters in the present of various other functionality, including nitro groups. One draw-back of this is that lithium borohydride is significantly slower than its counterparts (not to mention more expensive), but, using LAH or other highly reactive hydride species would result in side reactions involving the nitro group.

The required acyl chloride is commercially available, and should do the required reaction in place of the possibly competitive ester formations (nitrogen LP higher in energy).

7 steps overall starting from the cheap, commercially available 4-nitrobenzaldehyde. The majority of steps have good precedence on similar systems (ignoring the epoxide opening, which may/may not be fatal), and all of the proposed reactions can (and have been) demonstrated to be possible on large scale (again, ignoring the epoxide opening, but TMS-azide is often substituted in the case of process syntheses involving azide).

Some literature searching led me to a different linear synthesis with 8 steps.

A different, and perhaps more direct, route to aminoalcohols is provided by the Sharpless asymmetric aminohydroxylation:

Of course, it's never that simple. Styrenes tend to undergo this reaction with the wrong regioselectivity, i.e. the nitrogen tends to add to the benzylic position. In particular, Kurti and Czako write:1

cinnamate esters react to give preferentially the β-amino ester product...

A solution to this is to use a different chiral ligand, instead of the usual DHQ–PHAL and DHQD–PHAL ligands. In 1998, Sharpless reported the "reversal of regioselection in the asymmetric aminohydroxylation of cinnamates" , using an anthraquinone (AQN) core instead of the phthalazine (PHAL) core.2

There is another catch, in that electron-poor aryl groups don't work well in this reaction, for whatever reason:

Electron poor cinnamates proved less suitable with the AQN iigand system. For example, the AA of methyl 3-nitrocinnamate gave a 1:1 mixture of regioisomers and significant amounts of the diol by-product...

I don't really view that as a problem per se, though. The removal of the N-Cbz group is usually done with a hydrogenation, which is already incompatible with the nitro group.3 Instead, the entire problem can be circumvented by using the 4-chloro derivative, which was reported to give a 77:23 ratio of regioisomers B:A with an accompanying ee of 92%. The chloro group can then be converted to the nitro group near the end of the synthesis, using palladium chemistry developed by the Buchwald group.4

Methyl 4-chlorocinnamate is commercially available, but the restriction on starting materials to 8 carbons or fewer means that we need to make it. Of course, there are lots of valid possibilities. The most common way seems to be a Heck reaction, but olefin metathesis and the Horner–Wadsworth–Emmons have also been used. This cinnamate can then undergo the Sharpless aminohydroxylation as described previously, which creates the key C–O and C–N bonds with the desired stereochemistry.

The next step is DIBAL reduction of the ester to the alcohol, followed by protection of the 1,3-alcohol as the acetonide. I inserted this protection step as I'm afraid that the free hydroxyl/amino groups adjacent to each other would poison the Pd catalyst in the nitration step.

The synthesis is completed by: 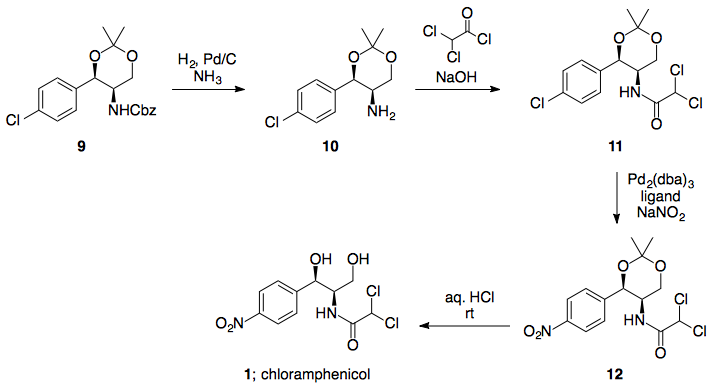 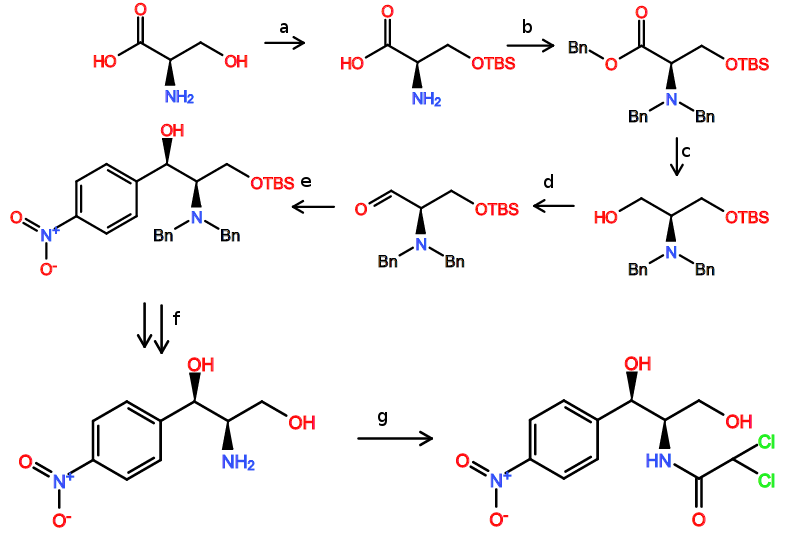 I started my route from D-serine. Not as available as biological L-serine, but still fairly cheap.

(a) TBS protect the alcohol. Otherwise, I'm going to get annoyed later trying to remove a benzyl ether.

(b) Exhaustive benzylation leads to dibenzylamine.

(e) I found this nice paper from Lüdtke (JOC, 2017, 82, 3334). The conditions are to use an aryl boronic acid (here, 4-nitrophenylboronic acid) and diethyl zinc. Unfortunately, I don't have journal access, so I can't check the substrate table to see if this particular combination works and gives good selectivity. As a general note, Reetz reports that these types of dibenzyl aminoaldehydes generally afford the Felkin-Ahn product, which is not what we want. This method with diethyl zinc affords the chelation controlled product, which provides the desired syn selectivity.

(f, 2 steps) Time to remove protecting groups. 10% palladium on carbon with ammonium formate should remove both benzyl rings. $\ce{TBAF}$ should pop off the silyl group. This product has a good chance of being crystalline, so we might consider shoring up purity with a recrystallization.

EDIT: The hydrogenation is probably the most questionable step in this synthesis since I have to do it in the presence of a nitrobenzene. In the worst case, we might be able to oxidize the aniline back to a nitrobenzene.

(g) Finally, dichloroacetyl chloride with $\ce{DMAP}$ and triethylamine should provide the desired product.

Eight steps in the longest linear sequence. Not my best work, but I think it works.

I solemnly swear I came up with this on my own...

The aminoalcohol motif (to me) strongly suggests the addition of an azide to an epoxide. The requisite chirality can be introduced with a Sharpless asymmetric epoxidation; then, the second stereocentre is easily set because the epoxide opening is stereospecific.

This target is relatively simple, so the retrosynthesis can probably fit in one scheme. I think it's also (mostly) pretty self-explanatory.

The choice of protecting group P in the starting material 5 is largely dictated by the presence of the nitro group in 6. Quite a lot of protected 2-bromoethanols are available in the Sigma–Aldrich catalogue; the obvious choice in terms of cost is probably the methyl ether (CAS 6482-24-2, 5 g for £20).

A standard Wittig reaction with 4-nitrobenzaldehyde 6 (CAS 555-16-8, 10 g for £19) should give the (Z)-alkene. Demethylation with $\ce{BBr3}$ and the appropriate Sharpless epoxidation should hopefully get us to 3:

and now I run into the same problem as described in NotEvans's answer: it would seem that the preferred regioselectivity of epoxide opening is at the benzylic position, where the $\mathrm{S_N2}$ process is accelerated.

My workaround would be to Swern oxidise the alcohol; open the epoxide (now the position α to the carbonyl group should definitely be favoured); and re-reduce the aldehyde (sodium borohydride):

The endgame is of course a Staudinger reduction and amide formation. As has been mentioned many times, dichloroacetyl chloride is commercially available (CAS 79-36-7, 5 g for £8).

If acylation on oxygen occurs I'd guess it can be reverted with $\ce{K2CO3/MeOH}$, and the amide should hopefully stay put.

All in all it's 6 steps if the epoxide is cooperative, 8 steps if it isn't.

Ok, so I decided to try this synthesis golf this time.

I decided to use benzene, 3-hydroxypropanoyl chloride, and dichloroacetyl chloride as my raw materials.

I'm starting off by performing a Friedel-Crafts acylation of benzene.

I will then do a Wolff-Kishner to get rid of the carbonyl.

And, that's it. Hopefully, this synthesis goes well. 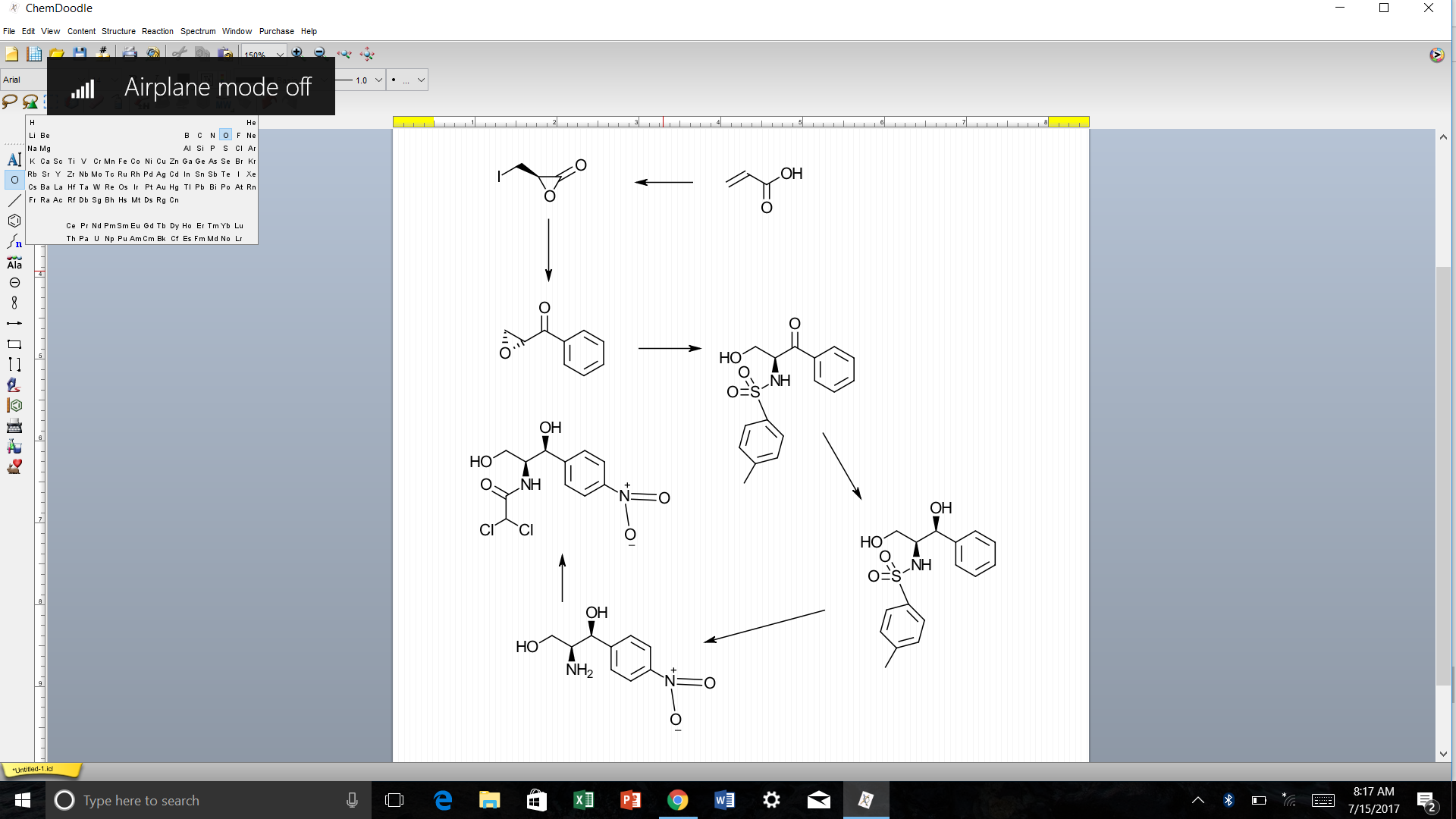 (4) - Reduction of the carbonyl. Occurs with this stereochemistry because the -Tosyl group is bulky and is hindering an attack from above. Therefore the attack proceeds from below and the alcohol is formed facing upwards.

(5) - Nitration of this compound occurs using a nitrating mixture, due to the strong acids present in the mixture, the amine is deprotected (tosyl group is removed).

A synthesis starting from a basic starting material. Asymmetric induction was through the Sharpless epoxidation. 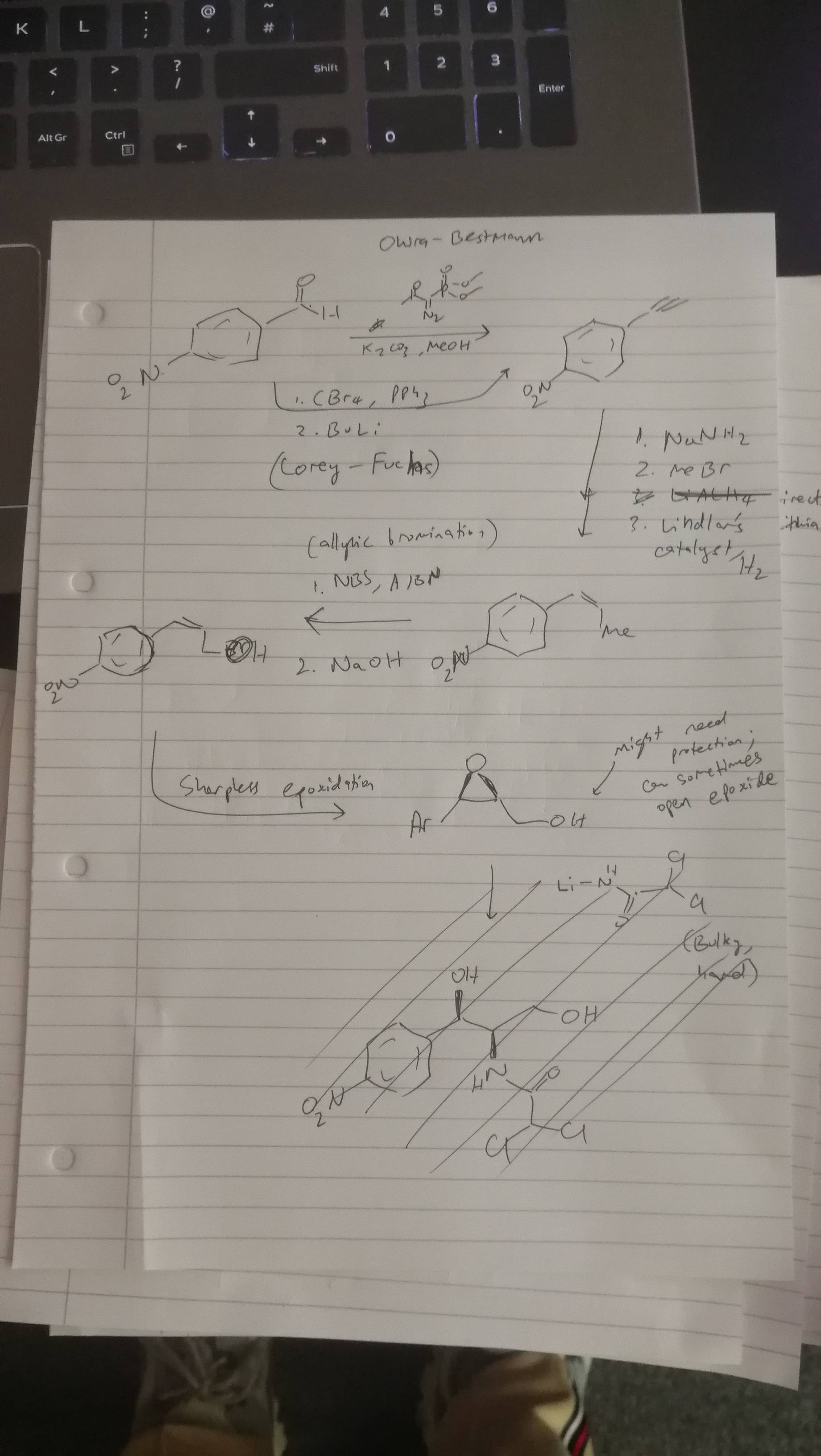 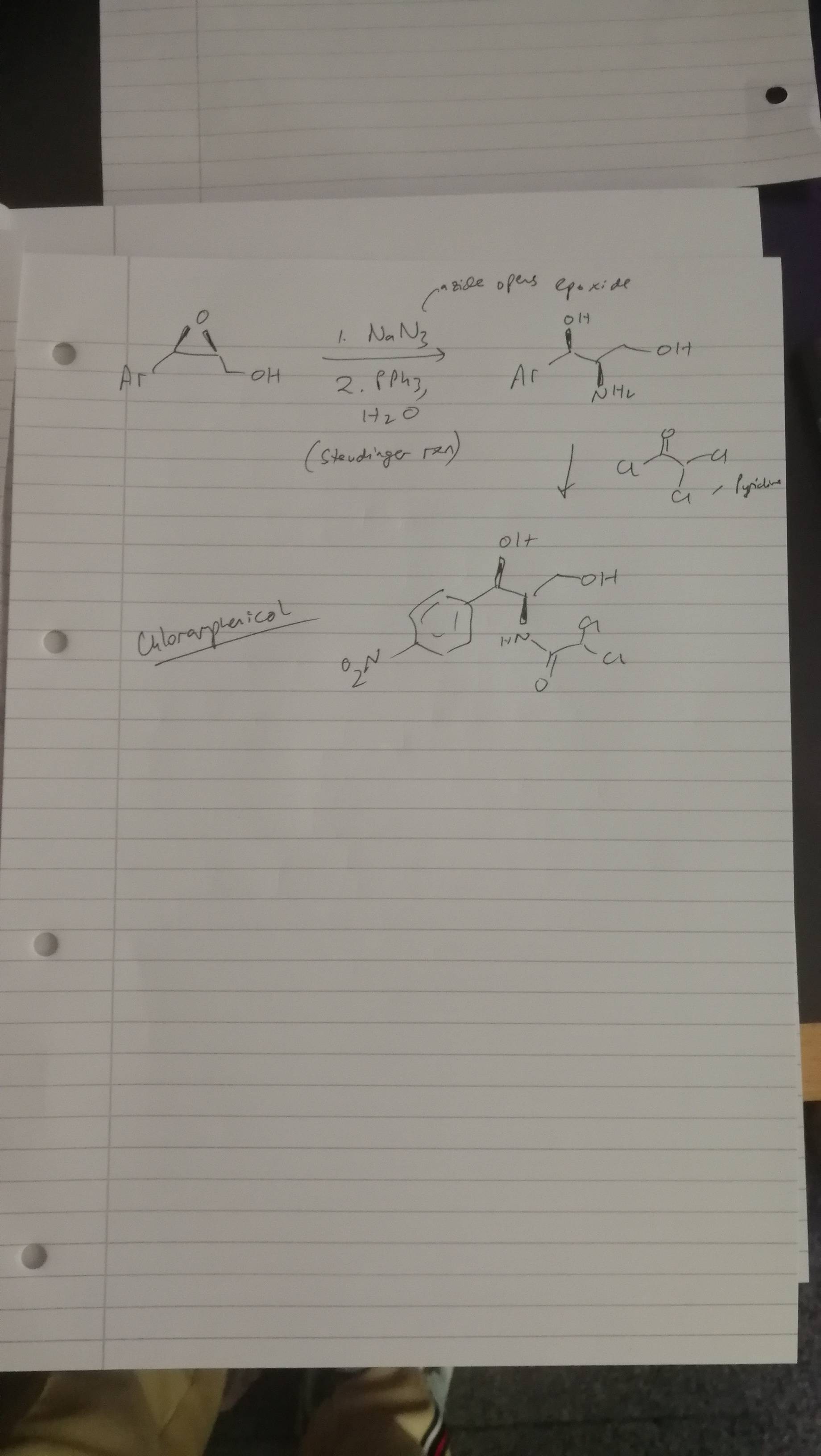