If I drink water without sipping, is there a chance of saliva diffusing into my bottle?

I always prefer to drink water without sipping, like this: 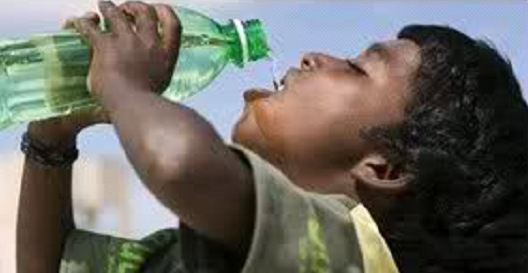 I do this so that my saliva doesn't contaminate the water contents, which would make the water impossible to share with my friends.

But lately, I have been thinking: Can the saliva diffuse through the water stream that pours into my mouth? Saliva is mainly composed of water, some salts, and amylase. Amylase is a rather bulky protein, so I don't expect it to diffuse so quickly, but I'm a little concerned about the electrolytes. Ions like $\ce{Na+, K+, Ca^2+, Mg^2+, Cl-, HCO3-, PO4^3-}$ are quite small and might diffuse into the bottle.

I don't have access to the values of the ionic speeds, so I'd like to ask a chemist for confirmation whether these ions can diffuse into the bottle.

To make the question a bit more informative, lets assume I keep the bottle about $\pu{3cm}$ away from my mouth, so the water would be flowing at a speed of approximately $\pu{77cm s^-1}$.

This question reminds me of a germaphobic classmate I had back in Middle-school. He would always stay clear of public lavatories/urinals because he was under the impression that urinating at one would result in bacteria from the urinal climbing up the stream of urine and into his urethra...needless to say, he was a very lonely boy.

The situation you described ("Drinking without sipping") is a modification (albeit, a more reasonable one) of the "Bacteria-climbing-up-a-stream-of-urine" theory.

I'm not a chemist myself, and like you, I am faced with... ahem, "issues", while searching for speeds of common ions in water (at a given temperature, and in the absence of an external electric field). But I feel this question can still be satisfactorily approached even without these values.

From the wording of your question, I suppose you assumed that potassium, sodium, magnesium and other ions would diffuse from a region of higher concentration (the saliva in your mouth) to a region of lower concentration of those ions (the stream of water entering your mouth). Now this would seem perfectly plausible if it weren't for a few things:

1) You're dealing with flowing water

This isn't a simple case of spitting into a glass of water and waiting for the contents of your saliva to (passively) diffuse into the water (and eventually form a dilute saliva solution). By drinking it the way you do, the passive diffusion of electrolytes in your saliva won't be able to match the speed of the water flowing into your mouth, much less exceed it in order to enter the bottle.

Human saliva contains a variety of proteins (among other things). Common experience tells us that saliva is (a little more) viscous than water, and doesn't "instantly" dissolve in it (<----- Coming from a guy who had to spit in test tubes for his Biology lab assignments). Now not only do the electrolytes have to actively diffuse upstream to get into the bottle, but they also have to "free" themselves from the saliva first.

This is the philosophically inclined conclusion to my answer. You're worried that the entry of electrolytes from your mouth into the bottle (won't happen) counts as contaminating it with your saliva. At first glance, even if the electrolytes seem to be able to make it to the bottle, you're pretty sure that larger molecules (such as proteins) won't be able to do the same.

If you don't count the proteins, epithelial cells and bacteria that normally constitute human saliva...how would this make saliva any different from a simple laboratory-prepared cocktail of sodium, potassium, magnesium, calcium, etc? Besides, ordinary (un-branded) bottled water would already contain these electrolytes; so by that logic, the water's already contaminated with your "saliva" even before you opened it!

With respect to the exact question in a highly literal sense, it is highly unlikely and next to impossible for ions to diffuse upstream in this manner; the linked question deals with this very nicely.

With respect to the implied question, however, as to whether you should trust a bottle of water, if someone with a highly contagious disease, known to spread though saliva droplets, drank from it from a distance of 3cm, then the answer is no. The problem wouldn't be one of upstream diffusion per se, but all sorts of splashes and aerosolised particulates dancing from one's mouth and onto the bottle opening itself.

Then again, if it's less about surviving a "Resident Evil" style incident and more to do with the "ew" factor, I wouldn't worry too much about it.

Not the answer you're looking for? Browse other questions tagged everyday-chemistry ionic-compounds or ask your own question.

19
Can molecules diffuse upstream when emptying a cup of tea?

16
Why does hand sanitizer turn into a liquid after coming out of the bottle?
2
Figuring out the volume of air trapped inside a bottle of water
21
Why can't rust form without water?
7
How do I chill water without a refrigerator?
20
Iron chemistry: acetates for ebonizing wood
4
Does carbonated water change over the course of several days, or was my container leaky?
6
Will a film of oil on water retard evaporation (of water) and prevent air and atmospheric impurities from diffusing into it?