Can the summation of activation energy and reactant's initial internal energy change with temperature? 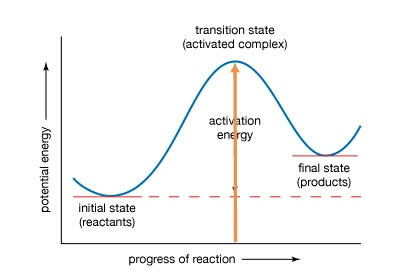 Look at the graph. The orange arrow represents the summation of activation energy and reactant's initial internal energy. Can it change with temperature? Is there any specific name for this summation?

No. As the label at the y-axis indicates, we are talking about potential energy. Potential energy itself does not mean anything, only energy differences can be meaningfully interpreted. (It is the same with heights, to quantify how tall a mountain is you give its height with respect to the sea level.)

Furthermore, a change in temperature does not change your potential curve. This curve is a minimum energy path. It represents the ground state of the system at each point along the reaction coordinate. But when we have a ground state, then there are excited states as well. And thermal energy makes the system partially occupy these states (either statistically in the classical sense or by probability distributions in the quantum mechanical sense). Effectively the reactant will be higher in energy, but potential remains the same! This is actually the way you can reach the transition state.

Not the answer you're looking for? Browse other questions tagged physical-chemistry kinetics reaction-control or ask your own question.