Because of Orthocresols' meta post I ask this question about application of group theory to molecular orbital theory.

In my undergraduate lecturers, we've seen many examples of making qualitative MO Diagrams by inspection of what orbitals could line up to form bonding / anti bonding orbitals.

This works fine for simple things, but I know it's possible to use symmetry to also work out mathematically which orbitals can mix with which other orbitals by using group theory.

Perhaps using example of water could somebody show how this could be achieved?

Group theory really just formalises the process that you're going through when you construct molecular orbital diagrams by inspection (though as the molecules get bigger it gets significantly harder to intuitively guess at what will mix and in what combinations).

In order to construct an MO diagram for water, we'll take a stepwise approach:

1. Symmetry of the central oxygen's orbitals

The symmetry of the oxygen orbitals (2s and 2p, the 1s isn't relevant to the bonding) can easily be read off from a character table. In this case, water has C2v symmetry, the character table for which is given below:

To summarise the information obtained:

(as @Orthocresol noted in the comments, there is no convention on axis in the C2v point group,meaning x and y can switch depending on what book you get the character table from. The one given is the same as the commonly used set from Atkins' Physical chemistry, but overall it doesn't really matter as long as you're consistent)

It's worth noting that you can derive these symmetries above by considering how the atomic orbitals moves under the various elements within that point group, this is shown below for the hydrogens, and not really needed to be repeated here.

2. Symmetry of the hydrogen group orbitals

To construct the group orbitals for hydrogen (which will go on to be mixed with the oxygen atomic orbitals), we simply have to consider the possible combinations and then work out the symmetries of those combinations.

For the case of two hydrogens interacting, only two cases are possible: in phase, and out of phase.

If we consider these two cases pictorially, we can then determine what happens to them under the various symmetry elements within the C2v group. If the orbitals stay the same, we assign a character of 1, if they switch, we assign -1.

Once we have the full set of characters for both possible combinations, we can assign symmetries, again, using the character table for the relevant point group:

Mixing is the part of this process that you're likely more comfortable with, except now rather than considering whether interaction (on symmetry grounds) is likely by inspection, we can do it by mixing orbitals with the same symmetry labels: 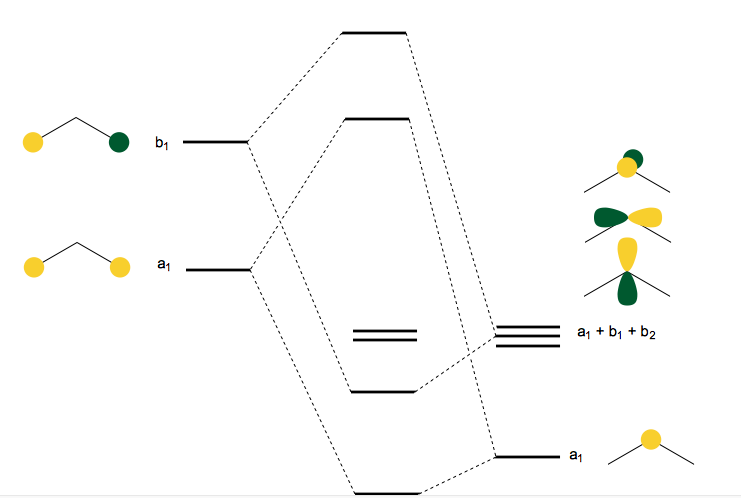 The diagram above is the one that you would likely have arrived at without any consideration of group theory (you can actually derive a more complex diagram in which the molecular orbitals also mix), some key points to note:

The general approach taken here was a mix between that taken in Group Theory for Chemists by Molloy, and Cottons' Chemical Applications of Group Theory. Most (if not all) books on group theory will provide examples of how to construct MO diagrams based on formal symmetry arguments, and many approaches exist.

I've followed a more qualitative method, relying on the character table to gain the required information, but there is a more formal approach in which irreducible representations are used... possibly someone else will provide an answer with this more formal method (the amount of MathJax required put me off doing this, especially given the ease at which the information can be accessed and the fact that given you're asking the question, you're probably not at the point at which this has been formally taught).

Not the answer you're looking for? Browse other questions tagged molecular-orbital-theory group-theory or ask your own question.