I am wondering about the electronic structure of pyridine.

If we look at nucleophilic substitution, which favored on electron poor centers, for 2-chloro and 4-chloro pyridine we see that the substitution in 4 position is about 5 times faster (Ethanol, 20°C, taken from The Chemistry of Heterocycles, page 277 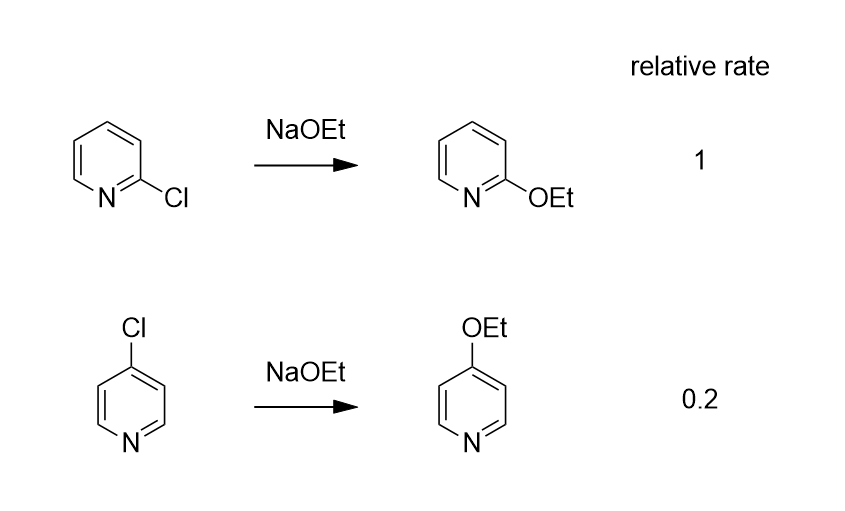 This SE question and answer explain why this might be the case and the explanation there is that the lone pair of the nitrogen is repelling the nucleophile. This might be the case to certain extend, but from geometry of the attack I doubt that it has much of an effect. In addition if we look at the electron distribution in the pi system we get this picture (also taken from The Chemistry of Heterocycles, page 271) 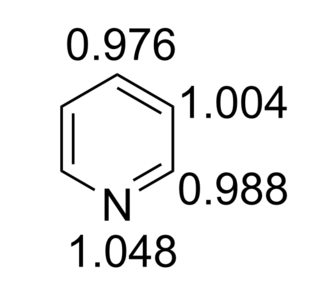 So the 4 position seems to be electron poorer than the 2 position. Usually we explain electron poor and rich centers in heterocycles by using mesomeric forms:

And the usual comment is that the 2 position is closer to the nitrogen so the electron withdrawing effect is stronger than in 4 position and it should be electron poorer, which isn't the case.

Is there an understandable explanation why the 4-position is electron poorer despite beeing furtehr away from the nitrogen?

When you deal with an aromatic ring, pairwise covalent bond structures miss a lot of key features. You need to consider the entire conjugated ring as a unit and take account of symmetry.

Consider almost a benzene ring. We may describe its $\pi$ orbitals as linear combinations of the out-of-plane atomic $p$ orbital on the carbon atoms. Let $p_k$ represent the wave function of one such atomic, with the positive lobe on a specified side of the ring plane. The same orbital but with the positive lobe on the"wrong" side of the ring plane is rendered as $-p_k$. The subscript $k$ refers to atom number $k$ as determined in the standard IUPAC scheme.

We then describe the canonical, occupied $\pi$ orbital as the familiar linear combinations:

Now suppose that atom $1$ is changed from carbon to nitrogen to make pyridine. Now that atom, being more electronegative, acts an an electron sink on occupied orbitals having an interaction with that atom -- meaning $\psi_1$ and $\psi_2$ are vulberable to thus $\pi$-electron withdrawal but $\psi_3$ which has a node at atom $1$ is "protected" by its symmetry. Then positions $2$ and $3$, with some of their $\pi$- electron density on the protected $\psi_3$ orbital, are less susceptible than atom 4 whose $\pi$ electrons are all on the vulnerable $\psi_1$ and $\psi_2$ orbitals.

Now, going a little beyond the question, suppose we were to N-oxidize the pyridine, as with a peroxy acid. In pyridine N-oxide the oxygen acts as a $\pi$ donor so that the nitrogen (or more accurately, the N-oxide functional group) is now effectively an electron source instead of a sink. The "vulnerable" orbitals are now electron enriched and this characteristic is most strongly imparted, by conjugation and symmetry as argued above, to position 4. Then electrophilic substitution, enhanced (or enabled?) by the N-oxidation, is most strongly so at position 4. So, the primary electrophilic substitution product, after subsequently reducing the N-oxide, is the 4-substituted pyridine. Which is what we see empirically with a wide variety of pyridine N-oxide electrophilic substitutions.

Not the answer you're looking for? Browse other questions tagged computational-chemistry aromatic-compounds electronic-configuration heterocyclic-compounds or ask your own question.

5
Why is pyrrole more reactive than pyridine and benzene for an electrophilic substitution reaction?
6
Is there any selectivity between the C-2 and C-4 positions of pyridine in SNAr reactions?
9
Nucleophilic aromatic substitution on pyrimidines: C2 vs C4 selectivity
3
Reaction mechanism of aqueous ammonia with 3,4-dibromopyridine

1
How does hyperconjugation lead to the directing properties of alkyl group?
23
Which compound reacts faster in the Cannizzaro Reaction?
2
Rate of EAS in chlorobenzene and fluorobenzene
10
Regioselectivity of an amination reaction of 2,6-dichloro-3-nitropyridine
3
Mechanism for the synthesis of 2-pyridone from pyridine N-oxide
4
The pyridine/benzene stability 'paradox'?
9
Electrophilic aromatic substitution of napthalene
2
Electronic effects of substituents in the benzyne mechanism
2
Confusion about comparing the charge densities of benzene and fluorobenzene