How to measure distance along solvent-accessible surface of protein complex in PDB file?

I am looking for a straightforward way to measure the distance between two active sites in a protein complex (PDB file). I need the distance along the solvent-accessible surface of the protein and not the linear distance that would go through the protein, and which the distance wizard will give.

I would prefer a solution using PyMOL, although I would consider alternatives as well.

I would use linear distances between a suitable amount of fixed points as an approximation. You cannot measure exact distances along a rough surface, as the distance will vary depending on minimum measuring size. This is known as the coastline length paradox in math.

In theory the length would approach infinity as the measuring size approaches zero. In practice you can get around the issue if you use a step size compatible with the smallest stable feature.

As Jeppe Nielsen says in the other answer, the distance along the surface is not defined. I would tackle this visually so that the reader can convince themselves that your distance makes sense. Cut the protein in two parts (with a plane that goes through both of the active sites and the "center" of the protein). Then (in 2D) trace a path and measure its length.

Here is an example using xanthine dehydrogenase. Instead of cutting the protein, I used slabbing to remove the top part. This ensures an orientation where the plane is in the plane of the paper. 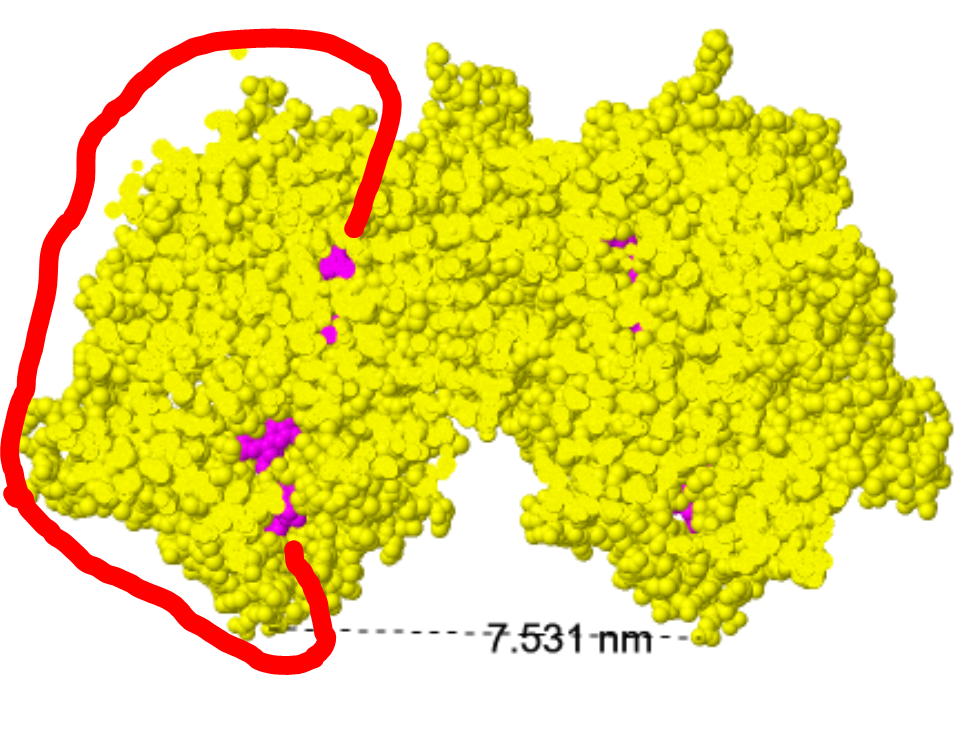 Using the linear distance shown as a scale bar, you can estimate the path length. This is all approximate, as it should be because the problem is ill-defined. If I choose a different orientation or slab, I will get a slightly different answer. You could also first select some surface atoms to define the path, and then estimate the distance by adding up atom-pair distances. Then, you could visualize the path in a 3D figure and state the distance.

Not the answer you're looking for? Browse other questions tagged software chemical-biology proteins structural-biology or ask your own question.

4
Solution based measurement of Solvent-Accessible Surface Area of macromolecules
5
Resources for learning Chemistry
0
Visualizing PDB file in VMD, how to upload molecules?
5
How to avoid the appearance of extra hydrogens from lattice packing of PDB file?
3
How to delete everything but a specific ligand from a PDB file using Linux-compatible free software?
6
How to write an entire trajectory into a single PDB file?
1
How to unify all the subunits in a PDB file?
2
How to identify 'water' mistakes in protein crystal structures: Are B-factors and occupancy good indicators?