Stabilisation of anions by silicon

In my lecture notes it was stated that in $\ce{Me3SiCH2SMe}$, deprotonation with tBuLi generates an anion in between Si and S. I've been not able to find the $\mathrm pK_\mathrm a$ values (not listed in Reich nor Evans).

Since Si is electropositive it should actively destabilise the anion, meaning that I'd expect to see terminal methyl group deprotonated.

No additional detail about conditions was given, but since it was tBuLi I presume low temperature (kinetic deprotonation).

Is there a reason why this deprotonation takes place? Are the $\mathrm pK_\mathrm a$ values relatively different?

Since Si is electropositive it should actively destabilise the anion

The statement above is largely one based on an inductive effect through the sigma system, in which the polarisation of the C-Si bond is considered. In this sense, Si does destabilise the anion.

Silicon stabilises anions due to negative hyperconjugation (more broadly, σ-conjugation). This is broadly speaking the pC -> σ*Si-C donation, although there is a second, arguably stronger interaction that is also involved in stabilisation of the anion.

The concept of silicon stabilising an anion is easily understood by considering a qualitative molecular orbital diagram: 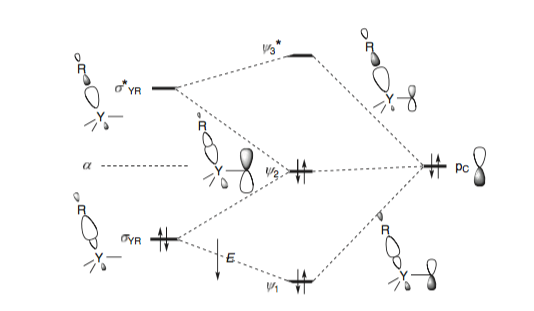 The stabilisation of an anion by adjacent sulfur, phosphorus and silicon groups. Taken from Molecular Orbitals and Organic Chemical Reactions (Reference edition), Fleming

In the diagram above the strongest interaction is the one between the p-orbtial on carbon and the σSi-C orbital – this results in ψ1 being substantially lowered in energy (qualitatively, E, o the diagram above).

A second (and arguably more important) interaction exists between the low lying σ*Si-C and the p-orbital on carbon, ensuring that ψ2 remains relatively low energy (if σ*Si-C was higher in energy, as it would be for some other elements, ψ2 would be raised higher, and this would overall counter-act the energy lowering interaction giving rise to E).

As a final point, the stabilisation is now widely accepted not to involve 'd-orbitals' on silicon, as had been previously hypothesised. Although in theory allowing the empty d-orbitals to accept electron density from the anion would lower the overall energy of the system, the d-orbitals aren't of similar enough energies to the orbitals that the anion charge is in, making efficient overlap highly unlikely.

Consider ylides used for Corey,-Chaykovsky, Peterson, and Wittig olefinations. Granted those have formally positive sulfur, silicon, and phosphorus, but you will not see similar easy deprotonation with tetraalkylammonium for example.

The reactions of silicon-stabilized carbanions are described more fully in Clayden 1st ed., pp 1304–5 (this material seems to have been cut from the 2nd edition).