Why do we need the identity operator, E

In group theory, in order to assign a point group, one must first identify the symmetry elements present in the molecule.

To give an example, water has: 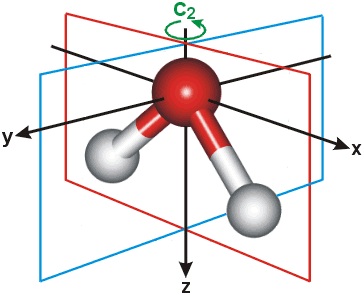 (Note that for the C2v point group, the axis are defined 'arbitrarily', different tables/books might swap x and y)

From this, it would look like water has three unique symmetry elements, however this is not the case, in fact, water has four due to the presence of an additional symmetry element, E, known as the identity operator (sometimes seen as I in certain textbooks).

This E operator corresponds to 'do nothing' (i.e. leave atoms where they are), which is easily seen in the character table for the C2v point group (to which water belongs) in which the characters under E are all '1':

The identity, E, consists of doing nothing; the corresponding symmetry element is the entire object. Because every molecule is indistinguishable from itself if nothing is done to it, every object possesses at least the identity element. (Taken from Atkins' Physical Chemistry).

Since transforming a molecule by the identity operator just gives back itself, the use of 'E' in a qualitative sense appears redundant, however it appears in every character table, and as such much have a purpose.

Why do we need the identity operator, E, and what use does it have in chemical group-theory?

It is not that we need the identity operator. It is just that things (character tables, irreducible representations, etc.) work the way they do. As to why they do so, I refer you to any decent textbook on group theory.

I guess one could rebuild the entire theory from scratch (that is, reformulate all definitions, starting from the very definition of a group, reprove all theorems, etc.) without explicitly using $\rm E$. That would be a titanic amount of work, though, and quite pointless at that. Also, many things like "order of a group is divisible by..." would start to sound less natural.

Come to think of it, why do we need the number $0$ in math? It just sits there and does nothing, after all. Well, doing nothing may be quite important: it makes a lot of other things simpler.

What you are asking arises as a fundamental consequence of the definition of vector spaces and the operations defined for them and, specifically, symmetry groups. The identity operator does not do "nothing" (see below) and it does belong in the formal definition of a group, and it is included to satisfy said definition.

From Byron and Fuller's Mathematics of Classical and Quantum Physics:

...a group is a system consisting of a set of elements and rules for combining the members of this set.

This sets the stage for the definition:

A group is a system $\{G, \cdot\}$, consisting of the set $G$ and a single closed operation $\cdot$, which satisfies the following three axioms:

Given this, we can go to more plain English as Wilson, Decius, and Cross do in Molecular Vibrations, where they note that

It is evident that for every symmetry operation possessed by a molecule there is some operation, either the same one or a different one, which undoes the work of the first.

This is an important point, and operationally illustrates what the identity operator does and why it is included in every group:

(For the record, WDC also write that "...$E$ is used for the trivial operation of leaving a molecule in its original position.")

There exists an element e in [Group] G such that, for every element a in G, the equation e • a = a • e = a holds. Such an element is unique (see below), and thus one speaks of the identity element. (Wikipedia)

Symmetry operator $E$ is the lowest symmetry a molecule may possess; and indeed all objects possess this operator. Yet, among molecules revealing $E$ as the only the operation are the ones exhibiting stereogenic centred chirality, like $\ce{CFClBrI}$. Hence $E$ is of value, not redundant, and needed.

This is a special case of a phenomenon that occurs throughout mathematics. For example, you could ask why we have zero for similar reasons. The answer is frequently: it's often easier to reason about a collection of things if the thing that represents 'nothing' is considered part of the collection.

In the case of groups, many theorems are easier to state if you include the identity as part of your collection. For example "the order of a subgroup divides the order of a group" is much easier than "one plus the order of a subgroup divides one plus the order of a group". And "in a group you can always multiply two elements" becomes "you can multiply elements most of the time but there are certain pairs you can't multiply because when you multiply them they cancel out doing nothing but we don't consider doing nothing to be an element of the group". Closer to your example, the statement of the orthogonality relations for character tables would be more complex.

The fact that so many things simplify when you include the identity is good reason for it being there.

It is true that the identity operation belongs to every group, as the other answers point out. One can still ask, why don't we just omit the first column, by convention, since it is all ones anyway?

The simple answer is that it is not always all-ones. It gives important information, namely the dimension of the space of an irreducible representation. In other words, if the first entry is $d$, the group elements are represented by orthogonal $d\times d$ matrices.

(A less serious reason is that the character table would no longer be a square table if we omit the first column.)

9
Identifying the C3, C4, S4, and S6 symmetry operations in the Oh point group
3
Deriving the irreps of the d-orbitals under C3 and S6 operations in octahedral symmetry
14
How do I determine the molecular vibrations of linear molecules?
11
Why are there only two irreducible representations in the C3 group?
3
Reducible representation of planar molecule N2H2 with bond lengths as a basis
5
Vibronic coupling: How do I determine the new point group after vibration?
3
Character table and symmetry operations
7
Why not just use the x,y,z as basis functions instead of linear/quadratic functions of these unit vectors?