Does a chiral centre have to have 3 or 4 different groups attached?

I am seeing conflicting answers on the net

A carbon atom is chiral if it has four different items bonded to it at the same position. (Wiki)

Also, there is a double bonded carbon atom here that is said to be a stereocentre, which I cannot understand. Isn't the double bond counted as two of the "same" attachments (so not even satisfying the 3 different groups criteria). How is that still a chiral centre? 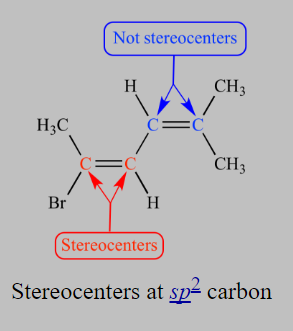 A chiral center requires four or more different molecular groups attached to a single center atom (asymetrical). In the case of pnictogens (nitrogen, phosphorus, etc...) or chalcogens (sulfer, selenium, etc...) an electron pair can count as one of the molecular groups.

An alkene is a stereocenter that requires 3 or 4 different molecular groups such that no two common groups are on the same side of the bond (must be able to determine an E/Z configuration). In the case of the blue stereocenter, the methyl groups are on the same side and thus switching their position would create an identical compound meaning the alkene is not a stereocenter. For the red center switching the position of the bromine and methyl groups would create the Z-isomer from the E-isomer thus is a stereocenter, but not a chiral center. If however, the hydrogen of the blue stereogroup were to switch positions with a methyl group then the blue alkene would be a stereocenter with three distinct molecular groups.

24
Can heteroatoms with lone pairs be chiral centres?
1
What kind of stereoisomerism do cisplatin and transplatin exhibit?
1
How does hybridisation affect an otherwise chiral centre?
-1
Conditions for Chirality in optical isomerism

1
R, S Configuration and Branching - Which Path?
5
Pseudochirality with more than two groups on one carbon atom
15
Mismatch of plane of symmetry vs Gold Book's definition for a pseudochiral carbon
2
Can chiral atoms have same substituents but with different orientations?