which is all nice, except for the slightly counterintuitive fact that PhNO is acting as an electrophile on oxygen rather than on nitrogen.

Logically PhNO should be electrophilic on nitrogen (less electronegative than oxygen), and indeed, a 1994 review on the reactivity of PhNO lists numerous examples where this is the case.3 On top of that, if the enamine were to ad to nitrogen instead of oxygen, the phenyl group could be placed equatorial in the transition state:

Is there an explanation for the regioselectivity here?

Houk (and subsequently others) applied computational methods to the reaction in an attempt to understand why the nitrosobenzene was acting as an electrophile at oxygen rather than nitrogen, as would traditionally be expected (and as is often the case when no proline is used). The computational studies showed a clear preference for the transition state in which the basic nitrogen of nitrosobenzene was able to interact with the acidic proton of the proline:

Proline catalysis occurs via a proline enamine attack on the oxygen of the nitrosobenzene monomer with a simultaneous proton transfer from the carboxylic acid. Computational evidence shows that the observed heteroatom selectivity materializes through the difference in basicities of the oxygen and the nitrogen atoms.

This study further indicated that the transition state for attack at N (which you drew) is disfavoured by 2.5 kcal/mol: 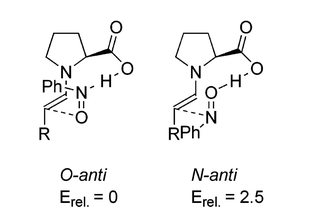 Not the answer you're looking for? Browse other questions tagged organic-chemistry carbonyl-compounds regioselectivity organocatalysis or ask your own question.