In order to try to increase yield of my cross-metathesis, it was suggested to carry out the reaction in the microwave (a lab microwave, not a kitchen microwave).

The rationale for this was that microwaves accelerate the reaction, but thinking on how a microwave actually works, it's basically just heating in the same way as I could achieve with a PEG bath.

When I searched the internet, there are lots of reviews and even books published about microwaves in organic synthesis, but I can't find a coherent argument for what microwaves are doing that makes reactions 'magically work'.

The radiation in theory simply causes the molecules to move creating heat, as far as I know, it isn't like photochemistry where something mechanistically different can occur.

Your question about the 'magic' microwave effect is one that I think most chemists who've used a microwave have asked. Anecdotally, some reactions do often just work better when carried out in a microwave. The whole debate is quite nicely summarised in this quote from a (fascinating...) book on the use of microwaves in chemical synthesis:

Since the early days of microwave synthesis, the observed rate accelerations and sometimes altered product distributions compared to oil-bath experiments have led to speculation on the existence of so-called “specific” or “non-thermal” microwave effects. Historically, such effects were claimed when the outcome of a synthesis performed under microwave conditions was different from that of the convention- ally heated counterpart at the same apparent temperature. Reviewing the present literature, it appears that today most scientists agree that in the majority of cases the reason for the observed rate enhancements is a purely thermal/kinetic effect, i.e., a consequence of the high reaction temperatures that can rapidly be attained when irradiating polar materials in a microwave field

From the table above, its clear that microwave radiation is not strong enough to cause any actual chemical change itself (other than via the temperature it creates), for microwave radiation used by common household and lab microwaves (2450 MHz, which is important as it avoids interfering with communication equipment), the energy is sufficiently low that it couldn't in theory even over-come a hydrogen bond.

There are several reasons why the use of a microwave may be beneficial compared to a standard reflux setup in a PEG bath (or any other conventional heating method): 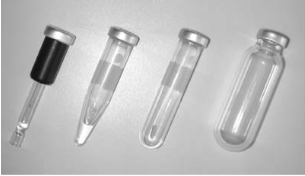 Overall, the easiest way to show all of this is by looking at the read-out from a microwave reaction, showing how quickly the desired temperature can be reached and how this remains constant, along with the pressure, throughout the entire reaction run: 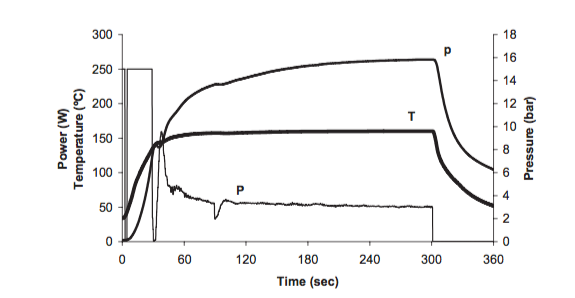 Non-thermal effects, or 'specific microwave effects' are defined as accelerations of chemical transformations in a microwave field that cannot be achieved or duplicated by conventional heating, but essentially are still thermal effects. These have been considered by many groups and indeed a wikipedia page exists discussing them, however they're difficult to show/prove experimentally.

For solution phase organic synthesis, its generally accepted that there is no specific microwave effect. Only in solid phase systems (ionic lattices for example) is there anything to suggest something unique going on that cannot be achieved using standard heating methods alone.

Not the answer you're looking for? Browse other questions tagged organic-chemistry experimental-chemistry equipment or ask your own question.