Stereoelectronics of the Houk model

In Clayden's Organic Chemistry it gives the Houk model as a way for predicting selectivity for alkene reactions where an existing stereocentre is present (diastereoselectivity).

Unlike the description of the Felkin-Ahn model, there is no real description of how the Houk model works, and I can't find this information in March Advanced organic chemistry either.

My feeling is that there must be some stabilising interaction between the pi system of alkene with a sigma orbital on the adjacent carbon, however this doesn't explain why one would be favoured over another.

1. Origins of the Houk model

The initial idea behind the Houk model was infact provided by Kishi, who proposed that alkenes with a chiral centre on the adjacent carbon adopted a 'reactive conformation' in which the small group eclipsed the alkene in order to minimise unfavourable steric interactions.[1] 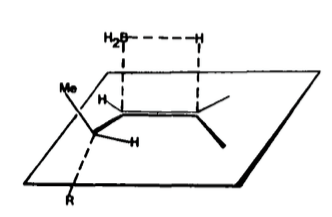 Houk took the 'reactive conformation' from the Kishi studies and modelled it computationally, showing that the lowest energy ground state conformation for alkenes with substituents at the allylic position was indeed the one in which the small group eclipsed the alkene, as proposed.[*]

The Houk model works largely on steric grounds, balancing A1,2 strain and A1,3 strain, as can be seen from the figure below:

Based on the arguments above, it's worth pointing out that the Houk model works best for cis alkenes, with trans alkenes often giving poorer selectivity:[2] 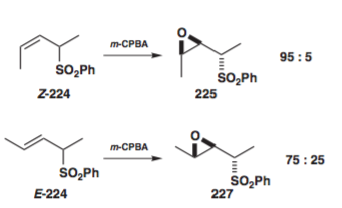 This result is consistent with the fact that in a trans alkene, A1,3 strain is already minimised by virtue of the olefin geometry, meaning that two possible 'low energy' conformers exist which have neither A1,3 strain nor significant A1,2 strain.

3. Reactions not following the Houk model

Not all reactions for which the Houk model could be used give the expected 'Houk product'. The most common of these (and indeed the one in Clayden that you mention in the question as not following the Houk model) is when the starting material is an allylic alcohol.

In the example above, the hydroxyl group is acting as a directing group, guiding epoxidation with the mCPBA to the same face (the steric argument, which would always predict epoxidation away from a bulky group, does not apply here).

[*]: The Houk group has been instrumental in providing a bridge between theoretical predictions and experimental results, providing weight to proposed models, and giving confidence in being able to look at a reaction and predict what product it may be.

Not the answer you're looking for? Browse other questions tagged organic-chemistry stereoelectronics stereoselectivity or ask your own question.

13
The Evans auxiliary: rotational freedom of the benzyl group - stereoselectivity still guaranteed?
12
Models for diastereoselectivity in nitronate additions
1
Is one syn aldol product preferentially formed over the other?
4
When is donation into an anti-bonding MO stabilising?