Why is the tetraamminecopper(II) ion square planar?

The tetraamminecopper(II) ion is square planar in shape. But why? How can I rationalise this?

Well it's not really square planar, it's just a streched octahedron. For copper(II) you end up with a $d^9$-system, a $d^8$ system might be able to do a real square plane but that one electron in a $d^9$ would cost too much energy if it was in a true square plane. The effect is called Jahn-Teller effect. You can simply imagine the $z$-axis for example of the octahedron to be elongated. If you did this till it breaks, you end up with the square base of an octahedron. And this is also what happens in a real square planar complex. All $d$-orbitals with a $z$-component are lowered in energy so they become occupied by electrons and, due to repulsion with the ligand's electrons, ligands will not come from the $z$-axis anymore. On the other hand if you lower the $z$-part in energy due to lever principle you will have to increase the energy of other orbitals as well.

You can see this quite beautifully demonstrated here: 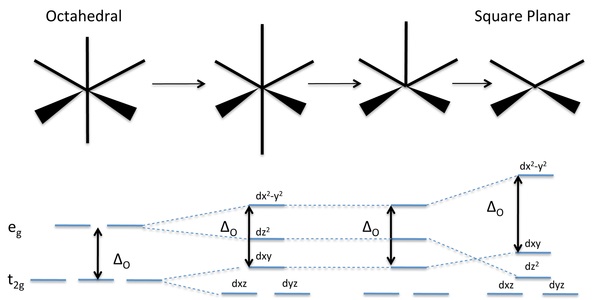 Let's imagine the right case with a square plane and a strong ligand so you start filling orbitals with two electrons before continuing to fill the next higher level or orbitals. Then you could add 8 electrons in total and leave the $d_{x^2 - y^2}$ empty. In total this gives you more energy than in the case of an octahedron. If you look to the left at the octahedron, you can see that for 8 electrons you would have to fill the $e_g$ as well and in total you'd end up with less energy which is why a plane geometry is favored by low spin $d^8$ systems.

Now copper(II) with its $d^9$ is in between that, a plane would be favored of course but it would require a lot of energy to put that extra electron into the $d_{x^2 - y^2}$. So you go in between, a really stretched octahedron, this is the second picture. Here the $d_{x^2 - y^2}$ is not as high as in the other case but the other orbitals you fill are already lower than in a symmetric octahedron so you end up with more energy already. And this is why copper(II) tends to do that. On the other hand this also changes the $d-d$ gap and explains that blue color of copper(II) compounds.

The other two ligands which are on the streched positions can be water, it could be a water and a sulfate, like in $\ce{CuSO4 * 5 H2O}$, but there is still something usually.

Not the answer you're looking for? Browse other questions tagged coordination-compounds transition-metals molecular-structure hybridization or ask your own question.

45
Why is it wrong to use the concept of hybridization for transition metal complexes?