How were elements and molecular formulæ determined in the old days?

Before modern chemical techniques, say in the 19th century and earlier, how did (al)chemists determine whether a substance was an element or a compound? If it was a compound, how did they determine its molecular formula and structure? 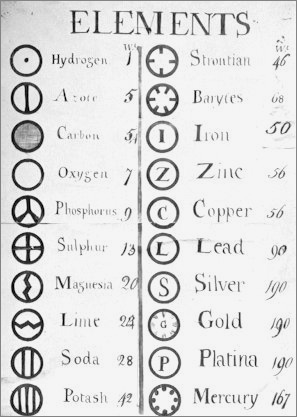 Lime is right there--and it's not actually an element. Neither is Baryte(s). Soda and Potash probably refer to the oxides of Sodium and potassium, though terminology may have been different back then.

In those days, elements were things that could not be synthesized by addition reactions. If you have a reaction $\ce{A + B ->C}$, then $\ce{C}$ is a compound (can't say much about the other two). Alternatively, if the substance can be decomposed (via anaerobic heating/etc), then it's a compound.

Most probably they would stuff things into the list "innocent until proven guilty" (I don't know about this).

Determination of molecular formula is much harder.

For organic compounds, it can be done by burning in a controlled environment. The ratios of oxides produced lets us know the relative quantities of all elements but oxygen. The quantity of oxygen can be determined by finding the decrease in Oxygen content of the chamber, and subtracting it from the Oxygen content of the oxides. The molecular formula can be found if you use the emperical formula and determine molecular mass.

For inorganic compounds, they probably had various tests for ions/etc (like the silver nitrate test for halides). They also had flame tests (and the borax bead test), which could help identify certain ions. I'm not too sure here, though.

It is a general test for the detection of halogens, nitrogen and sulfur in an organic compound. These elements are covalently bonded to the organic compounds. In order to detect them, these have to be converted into their ionic forms. This is done by fusing the organic compound with sodium metal. The ionic compounds formed during the fusion are extracted in aqueous solution and can be detected by simple chemical tests. The extract is called sodium fusion extract or Lassaigne's extract.

When an organic compound is heated strongly with sodium, any halogens, nitrogen, and sulfur will be converted into inorganic sodium salts such as sodium halide (for halides), sodium cyanide (for nitrogen), sodium sulfide (for sulfur), and sodium thiocyanate (for sulfur and nitrogen).The nitrogen is confirmed with ferrous sulfate i.e. iron sulfate.

An example procedure for halogens: Melt a small pellet of sodium (first strip the oil off with hexanes) in a test tube using a Bunsen burner. When it gets red hot, remove from heat, add a small amount of sample (1 to 2 drops if liquid), allow it to react for a bit and then place back on flame for a few seconds. When adding the sample, I would make sure that the test tube is contained in another piece of glassware, should it break. After allowing the sample to cool, quench it with a few mL of water and then neutralize the mixture using dilute nitric acid. If there is sulfur or nitrogen present you should boil this solution for a minute. Now, add silver nitrate and you should get out a nice precipitate that varies slightly in colour depending on the halogen in question. There are milder procedures but this is the only one I've had experience with.

0
How were weights of elements and compounds determined?
0
How did ancient chemists know the constitution of various compounds
4
How can an Organic chemist know the chemical formula of a natural product she isolated from an organism?
7
Can molecular structure be determined without modern characterization methods?

8
How were the elements discovered before modern technology?
2
How were the first molecular formulas determined?
25
How were old style stereographic structures produced?
6
How were silver and gold separated using the salt cementation process?
7
How did early chemists measure concentrations and purity?
1
How did early chemists measure mass of atoms?
14
How did Mendeleev know elements from compounds or mixtures?