Sulfonyl azides, $\ce{RSO2N3}$, are capable of acting as sources of electrophilic azide ("$\ce{N+3}$"), but are also capable of effecting diazo transfer, as shown in the scheme below, taken from ref 1: 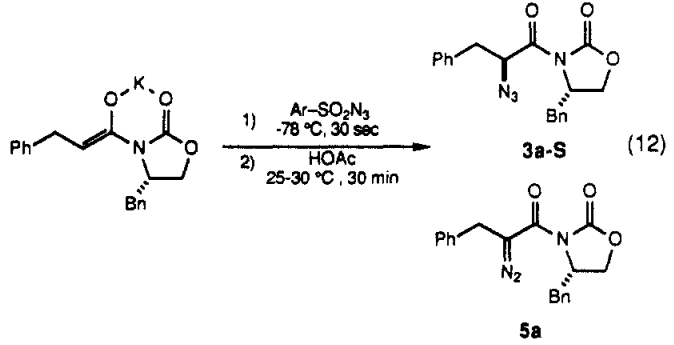 In 1990, Evans and coworkers1 showed that the aryl group on the reagent was important in controlling the outcome of the reaction:

which suggests that $\ce{TrisN3}$ (the third entry) is the best azide transfer reagent.

However, confusingly, it has also been reported that under phase transfer conditions, $\ce{TrisN3}$ outperforms $\ce{TsN3}$ (the second entry) in diazo transfer to ketones.2

With this in mind, Evans concluded that

Collectively, these independent observations underscore the lack of mechanistic sophistication which currently surrounds these reactions.

Since then, have there been any efforts to rationalise the effect of the aryl group on the product distribution? And if so, how can the results above be explained?

Browse other questions tagged organic-chemistry carbonyl-compounds organosulfur-compounds regioselectivity or ask your own question.

26
What makes diazo compounds so unstable and explosive?
10
Oxidative chlorination mechanism (sulfide to sulfonyl chloride)
2
Are sulfonyl-carboxylates stable in water?
9
Diazo transfer to 1,3-dicarbonyl with tosyl azide
1
Comprehensive resource on diazo coupling?
2
Preparation of sulfonyl chlorydes and mechanism of preparation of tosyl chloride
2
Selectivity of diazo-coupling with p-amino phenol