Single crystal x-ray diffraction stands among the most complex yet trustworthy analytical techniques when it comes to structure determination of solids. But how hard it would be to simulate(fake) the entire raw dataset, including all reflections, possible artifacts, experiment strategy etc. in order to fit a certain given structure? Is it even theoretically possible? Wouldn't it happen at some day that with all the computational power and trained neural networks XRD suddenly looses its good reputation?

Here is a brief report from the editorial section of Acta Cryst. E which overviews fraudulent content, which is still relatively easily detectable with the help of tools like CheckCIF even without looking at raw data. But can one commit a "perfect crime" by faking raw data entirely?

Structure determination by X-ray diffraction, regardless if powder diffraction, or single crystal diffraction analysis, is a spatial mapping of electron density. After solving a crystallographic structure (phase problem), the subsequent structure refinement includes steps to complete the crystallographic model, and to minimise the differences in the Fourier maps mapping observed electron density ($F_O$), with electron density predicted by your current model ($F_C$). This minimisation is done until this said difference is below a threshold value, and if the experimenter is satisfied with the result. For the later, this includes the complete and reasonable attribution of atoms (does this electron density belong to an atom of Carbon, or Nitrogen?), checking if bond distances and angles included in the model are consistent with the body of data determined in other experiments. Some of the critera applied are interdependent to others.

If the crystallographic model is completed (in layman's terms, if there is a *.cif file), than it is easy to predict a theoretical powder diffraction pattern. Programs like CCDC Mercury just ask about the wavelength to consider and offer graphical and numerical output like 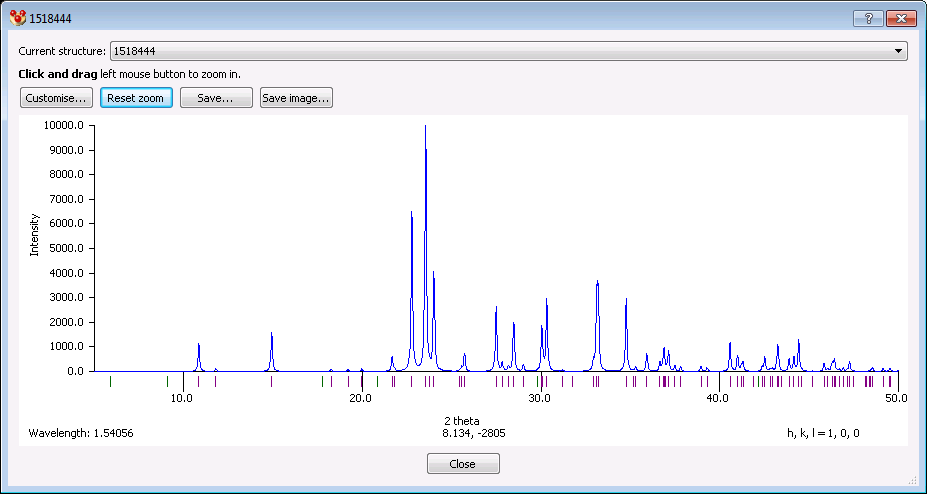 Such a theoretrical diffractogram is then compared with an experimentally recorded one; for example to check the newly prepared sample's phase identity (polymorphism) and purity.

In PXRD, spatial arrangement and conformations of subunits in the crystallographic model are optimised (refined) until yielding a model that chemically and mathematically is reasonable. This is the reason you see in publications a difference trace below the the superposition of experimental and predicted diffraction pattern: 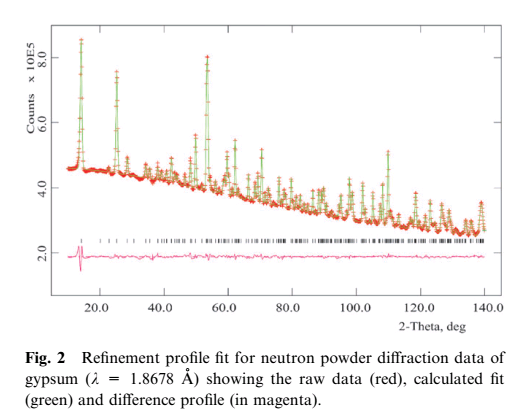 For single crystal diffraction, the generation of a 3D diffraction model computationally might be more costly than for PXRD, on the other hand, as said, programs like ShelX routinely compare experimentally recorded $F_O$ with predicted / calculated diffraction intensities $F_C$ derived from the current set of atoms (their coordinates, occupancy, etc.) of the model. It is done internally. ShelX' *.lst listings for example include a section like:

Hence I answer your question, if diffraction pattern may be simulated / faked with a "yes it is possible, provided there is a good data set about how the atoms / molecules are spatially arranged". Initiatives like the recurrent CSP blind tests to predict crystal structures and databases like PCOD may provide a foundation for this.

Then how to spot an artifical and wrong diffraction model? Checkcif / Platon are tools to check for consistency and integrity of such models against the raw data (hkl-files), structure factors. The recent installation of checksums into *.cif files (currently under watch as Platon errors PLAT012, 013, and 014), may be seen as one element of protection if few entries were changed after completing the work described above. These bells probably remain silent if data were compromised very early on.