In this Mukaiyama aldol reaction, taken from a 1999 paper by D.A. Evans,1 when $\ce{TiCl4}$ was used as the Lewis acid catalyst, the aldehyde 4a formed a chelated intermediate whereas 4b did not (due to the bulk of the TBS group). This was demonstrated by the stereochemistry of the product. Aldehyde 4a produced a syn:anti ratio of 3:97, whereas aldehyde 4b led to a ratio of 93:7: 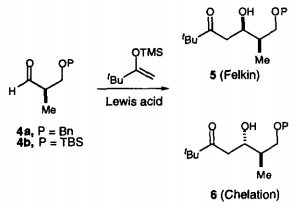 The chelated intermediate which aldehyde 4a goes through is a standard six-membered ring with a half-chair conformation. Perplexingly, the α-methyl group has to be placed pseudo-axial instead of pseudo-equatorial (or else the syn aldol product will be obtained):

Ordinarily, substituents would adopt a pseudo-equatorial position in the dominant conformer. Why is this an exception?

The ring-flipped version, in which the methyl group is psuedo-equatorial, would open via a high energy twisted TS (the opposite of the argument presented above, i.e. the low energy conformation of the starting material doesn't compensate for the high energy of the twisted TS).

Looking at the Evans' paper specifically, the TS he draws has an addition isopropyl group on the beta-carbon, which is equatorial (this would further stabilise the starting material, since the isopropyl would be far higher in energy if axial compared to the methyl).

5
Can carboxylic acids be used in the aldol reaction?
17
Why does acetate aldol with Evans auxiliary give almost no diasteroselectivity?
1
Is one syn aldol product preferentially formed over the other?
4
Why cyclohexane-1,4-dicarbaldehyde does not give aldol condensation?
0
What would be the aldol condensation products in B
8
What does the intramolecular aldol condensation of 6-oxoheptanal form?