One of the challenges in synthesis is the correct assignment of absolute stereochemistry. This has been asked previously on chem.SE (here and here), but this question specifically asks about the determination of hydroxyl stereocentres using the Mosher ester analysis.

Depending on the type of reaction carried out, this can often be done by inspection (for example, if a reaction forms a pair of diasteromers, they are often easily distinguished by NMR, assuming you know the stereochemistry of the initial stereocentre).

Where no chiral centres were previously present in the molecule (or where pre-existing chiral centres are too remote from the new centre to be relevant), assignment of absolute configuration can be challenging. Whilst x-ray crystallography can be used, many small molecules do not crystallise (or at least not without a significant amount of effort).

How does this method work? There are many diasteromeric esters that could be formed, yet only a specific few are used for this purpose, and equally, how come there is a need to form both diasteromers of the Mosher esters, when the change in shifts could be observed by just forming a single diasteromer.

The NMR spectra of two enantiomeric molecules are necessarily identical (just as all properties of enantiomers are identical in the absence of an external chiral environment). In order to tell the enantiomers apart, some additional chirality must be introduced. Two methods exist for this in NMR spectroscopy:

In modern organic synthesis, the use of chiral derivatising agents is far more common, and the process can be summarised as follows: 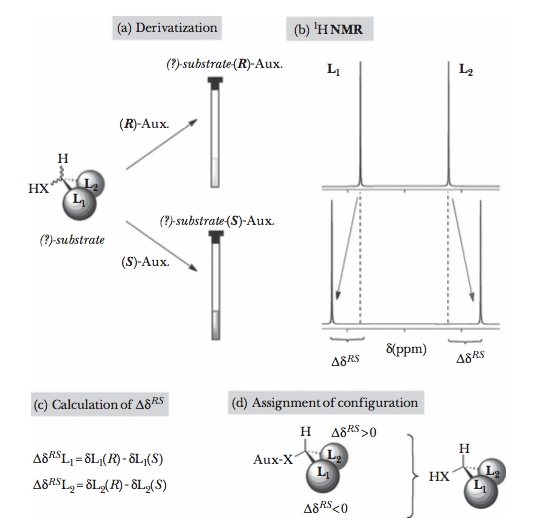 a. The alcohol of unknown configuration is derivatised by forming both the (R) and (S) Mosher esters. This can either be done under Steiglic conditions (DCC,DMAP) or via initial formation of the acid chloride.

b. Proton NMR spectra are ran of the two diasteromeric esters. The analysis is often ran on the crude esters, therefore the acquisition of COSY/HSQC is also useful to aid in assignment.

c. The difference between the chemical shifts of the (R) and (S) esters are tabulated (by convention we consider R-S, it makes no fundamental difference to the outcome however). Note that the method does not consider the shift of the underivatised alcohol at all, however the peaks for the (R) and (S) ester must be unambiguously assigned. Note also that we do not take into account the oxymethine proton (the shifts of this are erratic and don't contribute to the analysis).

d. The configuration is assigned by considering which side of the molecule is most effected by the presence of the Mosher ester.

The only way to actually understand the Mosher ester method is to carry it out (ideally with something of unknown stereochemistry so you can't convince yourself of the answer simply because you know its the case.

The next best thing is a worked example: 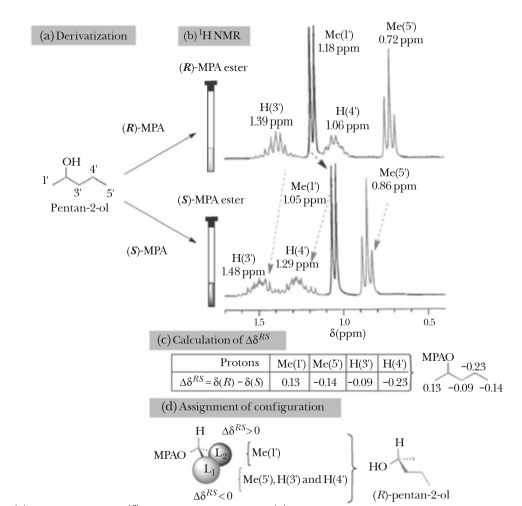 Looking at the two spectra, it becomes apparent that (R)-(S) is positive on the LHS methyl group, and negative on the protons on the RHS propyl group. Fitting this to the model, we can assign the sterocente of the secondary alcohol as (R).

The reason both Mosher esters should be formed is due to the fact that change in chemical shift between one Mosher ester and the free alcohol is often not huge. Other derivitising agents (such as AMA) can be carried out with formation of a single ester.

18
How do I determine the absolute configuration experimentally?