Reaction mechanism for the synthesis of 9,10-phenanthrenequinone

In my lab course I had to synthesize 9,10-phenanthrenequinone (phenanthrene-9,10-dione) from phenanthrene and chromium(VI) oxide. The synthesis was made as explained in Organic Syntheses, Coll. Vol. 4, p.757 (1963)

I now have to explain the reaction mechanism, but unfortunately I don't find it in any of my textbooks, neither on the internet.

Here is my assumption:

So what misses is the alcohol. Somehow I have to get the 9,10-phenanthrenediol, which could react as alcohol in the Jones-Oxidation.

How could this possibly work. Remember, I don't have $\ce{OsO4}$, which could easily dihydroxilate an alkene.

EDIT 1: As an answer to the proposed mechanism by @Zhe:

Is this ok in your eyes?

EDIT 2: An other idea for the first step (dihydroxilation)

A person of the scientific staff of my university told me, that the $\ce{CrO3}$ should react in a very similar way as $\ce{OsO4}$ does. As I'm using 7.50 eq of chromium(VI) oxide, there is enough for the dihydroxilation and the Jones-Oxidation. He said that a radical mechanism is rather unlikely, because I'm working with water as solvent and water is an inhibitor for radical reactions. This is the mechanism I came up with, regarding these new information. 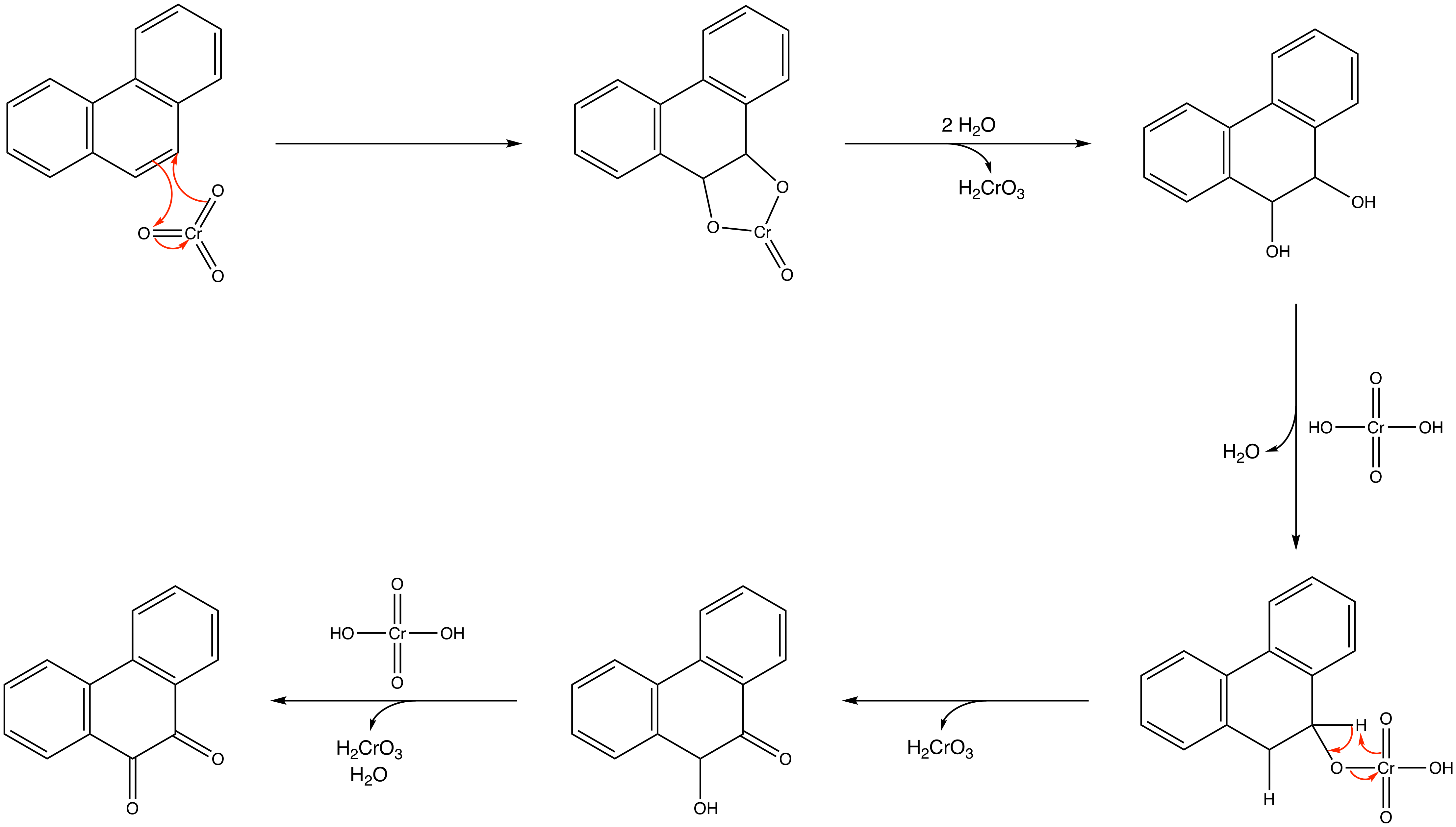 What do you think about this possibility?

Here's what I was thinking.

This probably happens via a single electron oxidation of that double bond to a radical cation as a first step. The cation can trap water and then we can oxidize the radical to a cation. Eventually, you get to a diol which you can oxidize to a diketone. 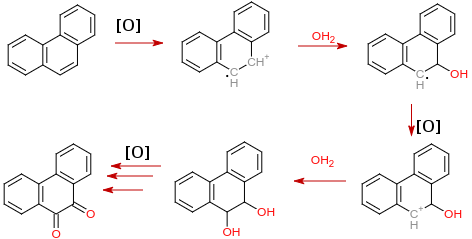 I ommited the steps for chromium oxidation from the alcohol to the ketone. Sounds like you are already familiar with those.

Not the answer you're looking for? Browse other questions tagged organic-chemistry reaction-mechanism redox synthesis or ask your own question.

6
Why is the water reduction of oxygen favored in acidic conditions?
8
Synthesize acyl chloride from aldehyde
9
Mechanism of toluene oxidation with CrO3
4
Net ionic equation for a synthesis reaction?
9
What is the actual mechanism of Fenton reaction?
1
Dependence of primary alcohol oxidation on presence of water and "strong" or "weak" oxidants
9
Mechanism of DPD (N,N-diethyl-p-phenylenediamine) reaction with free chlorine
1
Usage of TFA in Pfitzner-Moffat oxidation and Collins vs Jones oxidation
3
How can I prevent and remove oxidation on the surface of liquid Galinstan?