Formation of zwitterion from amino acids

I know it has to do with the very polar bond due to the oxygen. And the $\ce{H+}$ ions attracted to the lone pair of electrons on $\ce{N}$ in the amino group.

But I don't understand why would an electronegative atom such as oxygen wants to lose a proton.

I was told that they will attract more electrons towards towards them. But that does not help in my understanding of why protons will leave.

The reason amino acids exist largely in their zwitterionic form at biological $\mathrm{pH}$ (usually around 7) is due to the $\mathrm{p}K_\mathrm{a}$ of the constituent groups. It's not that the oxygen 'wants' to lose a proton, but more that at that $\mathrm{pH}$ the equilibrium lies towards the deprotonated state (things are rarely 100% protonated/deprotonated).

In general, carboxylic acids easily lose their proton to form carboxylates (the anionic charge is delocalised over the three atoms making the proton loss 'favourable'), and amines act as bases, to pick up a proton. 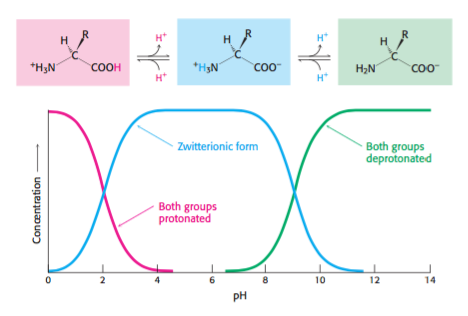 You can see as, by the cleavage of proton the carboxylate ion becomes resonance stabilized which provides high stability and also due to the character of amino group as a lewis base it will be easier to attract the proton loosen by the carboxylic group. So this type of reaction is proposed to explain the aspects such as high M.P.(Melting Point), B.P., etc. Because now it behaves as a salt( in the form of zwitter ion).

2
What happens to the amino acid when it is in a solution with the pH of its isoelectric point? (zwitterions)
3
Acidities of amines and carboxylic acids
12
More acidic - protonated carbonyl or protonated hydroxyl?
3
Why and when is lysine charged
2
why Ammonia is proton acceptor
0
How is the amino group basic?
3
Why is hydrated beryllium ion acidic?