What is a hydrogen bond acceptor and donor?

I recently read about hydrogen bonding. One thing about which I am really confused is how to distinguish between hydrogen bond acceptors and donors.

I looked it up on SE and found this post, which said that water can form four hydrogen bonds as it has 2 hydrogen bond acceptors (the H atoms) and two H bond donors (the two lone pair of electrons on O atom).

When I looked it up on Wikipedia, it said:

And both of them seem to be contradictory. Which is correct?

Dissenter's answer which you linked appears to be wrong (as of now). I have left a comment.

Of course, water is capable of acting as both an acceptor and as a donor: 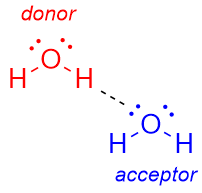 I wouldn't call it a "proton donor" like Wikipedia does, though, as that suggests some kind of acid-base reaction occurring, like

I would say it is a bit of a misnomer, saying that something is accepted or donated. A hydrogen bond is an attraction between a very positively polarised proton and a well defined lone pair, from N, O or F. When this attraction is broken the molecules separate, no protons are donated or received (overall, of course proton exchange can and does occur)

Not the answer you're looking for? Browse other questions tagged terminology intermolecular-forces hydrogen-bond or ask your own question.

23
Why does hydrogen fluoride have a boiling point so much lower than that of water?
15
Can an amide nitrogen be a hydrogen bond acceptor?