Will a solid object lose or gain atoms on standing over time (without being acted upon by external influences)?

Suppose I'm in my room with my keyboard, my desktop and my desk. Are these objects losing or gaining atoms every second? Or are they forever stuck with the same number of particles until you scratch, break or pulverize them?

Or suppose, for simplicity's sake, I have a pure gold sphere in my room. Neglecting the presence of dust or oxide layers...would it be losing or gaining atoms over time on account of simply standing untouched in one place?

Short answer: Yes they do.

Firstly, you need to arrive at a proper definition for an "object". Why you ask? Because it would otherwise present philosophical problems which become apparent when we begin to work with those objects.

... what is an object? Philosophers are always saying, “Well, just take a chair for example.” The moment they say that, you know that they do not know what they are talking about any more. What is a chair? Well, a chair is a certain thing over there … certain?, how certain? The atoms are evaporating from it from time to time—not many atoms, but a few—dirt falls on it and gets dissolved in the paint; so to define a chair precisely, to say exactly which atoms are chair, and which atoms are air, or which atoms are dirt, or which atoms are paint that belongs to the chair is impossible. So the mass of a chair can be defined only approximately. In the same way, to define the mass of a single object is impossible, because there are not any single, left-alone objects in the world—every object is a mixture of a lot of things, so we can deal with it only as a series of approximations and idealizations.

I get what you are trying to ask in your question, and it is per se, a reasonable question; but the example (your room) is (unfortunately) difficult to deal with...the single glaring issue being the inability to define an object in an absolute sense (I'm not blaming you, in fact, no one can define any real-life object exactly :P)

Just picking out some other holes in your "room" example: Is you room sealed (can it be considered a closed system)? Is your room evacuated (I mean a "Vacuum")? Are the different "objects" present in the room in contact with each other? Are there foreign particles present on the walls, ceiling and floor? You can see where this is going...

You go on to mention using a "pure glass/gold sphere" in order to circumvent some of the difficulties of defining an "object". Unfortunately, 100% purity is inconceivable (the main issue being the dust/oxides that are present at the surface). To neglect the presence of these layers would be to forgo reality...and the question (using the "pure" spheres) would be reduced to a purely theoretical proposition.

Trying to address you question, I'll do this in two ways: first I will deal with an idealized case and secondly, I shall deal with the abomination you call your "room" (introducing a few constraints of course, to keep things simpler) :D

First: The (highly) idealized version of your example:

You have a really large ("infinitely" large, if you will, since this is a thought-experiment) sealed region of space, and this "chamber" (as we shall now call it) shall be totally isolated from its surroundings: No energy transfer, no mass transfer, no (external) gravitational field, no (external) electric or magnetic fields...no nothing. The walls of the chamber have no substance and are infinitesimally thin. The inside of the chamber is maintained at an arbitrary temperature of 25°C.

Simply put; the neon atoms will impinge on the gold cube and some may end up "sticking" to it. The gold atoms will slowly (like reeaaally slowly) "diffuse" out of the original block and co-exist with the neon atoms as a gas (you can think of this as the "evaporation" of the solid gold cube). You'll observe that even though neon diffuses into the gold cube, and the gold atoms diffuse into the neon gas...over a period of time there is a net diffusion of gold atoms out of the block. Keep watching, and you'll find that you have a gaseous mixture of neon and gold, with no solid gold left to speak of. Handwaving the kinetics involved here, this is an example of the Second law of Thermodynamics at play. The entropy (or the "randomness") of the system goes on increasing over time, and will continue to do so until an equilibrium condition has been achieved. {You might also want to read about the Heat Death of the Universe <--- Interesting thought}.

Even if you didn't have the neon in the chamber (I put it in there to "simulate" the air in your room), the cube would still "evaporate" into a gas, albeit, at a slightly faster rate.

Second: Your room (with a few restrictions):

Start the clock...and what happens?

The results are similar (albeit, a scaled down version) to the idealized case. Every "object" in your room loses atoms/molecules and gains some too. Like before, there is a net diffusion of particles out of the objects in your room...entropy increases yet again. Leave it there for a few hundred million years, and you'll find that the objects in your room will have changed significantly (remember, the time frame was in hundreds of millions of years).

As @Ruslan pointed out in the comments: Unlike the ideal case where the gold atoms can evaporate from the cube and continue to spread ad infinitum...your furniture and computer don't have that kind of luxury (their ability to spread out in space is limited by the walls of your cramped room) and hence won't evaporate completely (but there is evaporation nonetheless).

Here's an excellent piece (The Feynman Lectures on Physics, Volume 1, Chapter 1) you must read through before we continue: 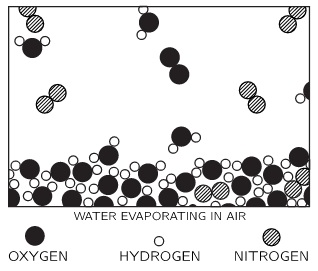 We see the water molecules as before, forming a body of liquid water, but now we also see the surface of the water. Above the surface we find a number of things: First of all there are water molecules, as in steam. This is water vapor, which is always found above liquid water. (There is an equilibrium between the steam vapor and the water which will be described later.) In addition we find some other molecules—here two oxygen atoms stuck together by themselves, forming an oxygen molecule, there two nitrogen atoms also stuck together to make a nitrogen molecule. Air consists almost entirely of nitrogen, oxygen, some water vapor, and lesser amounts of carbon dioxide, argon, and other things. So above the water surface is the air, a gas, containing some water vapor.

Now what is happening in this picture? The molecules in the water are always jiggling around. From time to time, one on the surface happens to be hit a little harder than usual, and gets knocked away. It is hard to see that happening in the picture because it is a still picture. But we can imagine that one molecule near the surface has just been hit and is flying out, or perhaps another one has been hit and is flying out. Thus, molecule by molecule, the water disappears—it evaporates. But if we close the vessel above, after a while we shall find a large number of molecules of water amongst the air molecules. From time to time, one of these vapor molecules comes flying down to the water and gets stuck again.

So we see that what looks like a dead, uninteresting thing—a glass of water with a cover, that has been sitting there for perhaps twenty years—really contains a dynamic and interesting phenomenon which is going on all the time. To our eyes, our crude eyes, nothing is changing, but if we could see it a billion times magnified, we would see that from its own point of view it is always changing: molecules are leaving the surface, molecules are coming back. Why do we see no change? Because just as many molecules are leaving as are coming back! In the long run “nothing happens.” If we then take the top of the vessel off and blow the moist air away, replacing it with dry air, then the number of molecules leaving is just the same as it was before, because this depends on the jiggling of the water, but the number coming back is greatly reduced because there are so many fewer water molecules above the water. Therefore there are more going out than coming in, and the water evaporates.

Based on the excerpt, I'll try to develop an analogy for what's going on in 1) Your room and 2) The "infinite" chamber I mentioned first.

1) Analogy for what's going on in your room:

You fill a perfectly dry bottle halfway up with water and screw on the cap. The water molecules constantly evaporate from the surface and molecules of oxygen, nitrogen, etc from the air inside the bottle constantly impinge on the water surface and may get dissolved into the water as a result. However, their ability of the water molecules to spread out in space (increasing entropy) is limited by the bottle's boundaries. Though we have an initial net evaporation of water...we're soon faced with an equilibrium state (described in the excerpt) where there is no net evaporation of water. You're still left with water that is mostly in its original (liquid) state.

It's pretty much for reasons similar to this, that the object in your room won't completely evaporate. There simply isn't enough space for the particles to "comfortably" move out in to.

2) Analogy for what's going on in the idealized case:

You pour a glass of water on the side-walk. Unlike the case of the bottle, water molecules can evaporate and expand till infinity (well, it's "infinite" relative to the the space you had in the bottle).

It's pretty much for reasons similar to this that the gold cube in the idealized chamber will completely evaporate.There is enough space for the particles to "comfortably" occupy outside of the solid that they were initially constrained to.

So yes... over time, all the "objects" in your room lose and gain particles over time. Ultimately however, the "object" you once knew will no longer be the same >:)

-1
Metals Vapor Pressure
1
How fast does the diamond lose the atoms at sunlight?