Why is the E2 protein important for protein degradation?

In the ubiquitination process, the E2 protein transfers ubiquitin from E1 to E3. Why can't E1 work with E3 directly to tag some protein with ubiquitin? Going further, why can't one of the E(1-3) proteins just do it all by itself?

Pretty hard question, "why", as we've not been watching for the millions of years it took to build that system... I think the better way to look at it is to name the advantages this system has and hypothesize on it's selection. BTW in biology a good answer to why is always because.

I would guess though that given the function of ligases, it has been selected against due most probably to lack of selectivity. E1s are very small and already need to do both activation of Ub consumming atp and doing a somewhat major conformation shift to accept ligation of the activated Ub. The amount of Protein Protein surface usually required to maintain the exquisite selectivity that is required for such a system can be assumed to be too great for the size of the E1s.

Then if you ask why it did not evolve in some kind of huge multidomain protein; I would probably argue to the point that you need to produce a very large amount of it all the time, and that it must be somewhat difficult to target that protein for proteosomal degradation / make sure it's folded properly. Having a smaller footprint might help in keeping the domains ordered and reducing entropy hence making sure the protein stays functionnal longer.

Then why not the E2 doing it directly, and why do you need the E3 in between... Well again, I would assume this is also a question of selectivity. If you need to regulate thousands of cytosolic proteins and control their regulators at the same time, you need some modularity, you need the ablity to create multi protein complexes that bring different layers of regulation and cannot assume that one protein can do that. The term E3 is also some horrible bin where people put anything. E3 are very often large and sometime huge multiprotein complexes, think of the APC complex, or in the most well documented cases, the Cullin complexes.

The way E3s evolved is pretty cool actually, to recruit E2-Ub a protein just needs to get a domain through some mutation (RING, U-Box, HECT...) then it can target whatever it used to bind to a degradation complex. That is some pretty neat and quick trick to create diversity rapidly if a system actually does something that brings an evolutionary advantage.

I see you left out the E4 which may play a role in Ub chain propagation but as they pretty much function as E3 anyways, there is debate as to why we would need to use that terminology.

This is by no mean some definite answer since I could be wrong on most of these things. I hope I helped you to further your reflection on the subject.

I do agree with @Dan as to “why” the ubiquitination proteins are arranged the way they are and are able to complete the process together.

It is easier to answer the question after examining the role each protein works.

The main reason is that these proteins vary in structure and selectivity and therefore have different functions in the process on of ubiquitination, thus not one or two proteins are essential but all of them.

Firstly, these proteins are very much different in terms of structure, selectivity, abundance and variation.

To understand this difference lets consider the x-ray structures of these proteins: 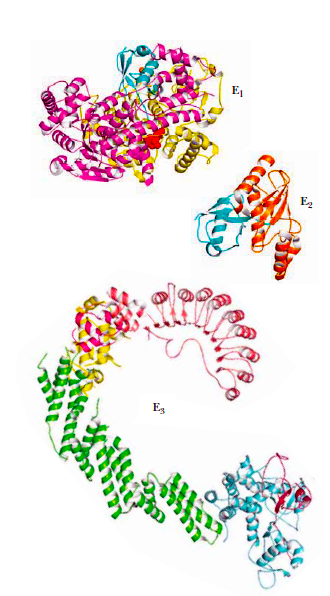 Let’s discuss a bit on the functionality of these proteins on named subheadings:

The E1 protein (ubiquitin-activating enzyme (E1), a homodimer of ~1050-residue subunits), initiates the ubiquitination process through conjugation by forming a thioester bond. The ubiquitin is then transferred to a specific Cys sulfhydryl group on one of numerous ubiquitin-conjugating enzymes E2.

Most organisms, including yeast and humans, have only one type of E1. Thanks to the role of E1 which play a part in the committed step of the process. Even if proteins were marked for degradation, they would not be processed unless the enzymes system is activated. Basing on structure, I don’t think E2 or E3 would be a good activating enzymes.

The abundance of catalytic cysteine sulfhydryl groups on E2 makes it a good transporting medium for ubiquitin., which make them specialised transporters of ubiquitin.

To expand more on specificity, each of the many E3s present in eukaryotic cells mediates the ubiquitination of a specific set of proteins and thereby marks them for degradation. Different E2 and E3 enzymes exhibit different specificities for target proteins and thus regulate different cellular processes. Some E2 and E3 enzymes are highly localized in certain cellular compartments, reflecting a specialised function.

In protein degradation, ubiquitin is not just transferred to any protein, in fact proteins only marked for degradation are the ones that get the ubiquitin.

One signal which controls whether a protein becomes ubiquitinated is the half-life of a cytosolic protein mainly determined to a large extent by its amino-terminal residue (this dependency is referred to as the N-terminal rule). Not surprisingly E3 plays a central role in recognising and selecting proteins for degradation. E3 selects proteins by the nature of the N-terminal amino acid. E2-S ubiquitin transfers ubiquitin to free amino groups on proteins selected by E3, the ubiquitin-protein ligase.

Although the E3 component provides most of the substrate specificity for ubiquitination, the multiple combinations of the E2-E3 complex allow for more finely tuned substrate discrimination.

More than one ubiquitin may be attached to a protein substrate, and tandemly linked chains of ubiquitin also occur via isopeptide bonds.

Summarising the discussion, as we saw since humans have one type of E1 enzymes, if that enzyme alone would have been responsible for the all the processes, then selectivity of proteins would have been very low (recognition and marking for protein degradation or other cellular compartments lacking the enzyme would not have ubiquitination at all). This is one of the reasons why E2 is necessary - thete are several forms of E2 with different specifities (some are about to react with RING domain E3 while others with HECT), which would not be the case if E2 weren't present, E1 alone would not accomplish this either.

E2 is able to recognize the proteins which must “receive ubiquitin”, E1 alone would not achieve this neither the two of them because, they must be first marked by E3.

Now the supposedly unanswered question is since E3 is more selective and abundant wouldn’t it carry the process alone? . Well this is a tough question but I guess the answer lies in the discussion above: Although the E3 component provides most of the substrate specificity for ubiquitination, the multiple combinations of the E2-E3 complex allow for more finely tuned substrate discrimination. These are some points which might address the importance of these enzymes, I believe there are deeper explanations to this but this what I managed to dig in my research.

Not the answer you're looking for? Browse other questions tagged biochemistry proteins or ask your own question.

1
Explicit differential equation based model of protein folding
2
What is the difference in the effect of DTT (Dithiotreitol) and SDS (sodium dodecyl sulfate) for PAGE?
1
Estimating protein binding and disassociation
2
What exactly makes a carbon atom “α” in a protein residue?
0
Turn Alpha Helix into Beta Pleat