The weedkiller paraquat can be produced from methyl-pyridinium chloride using a cyanide catalyst: what is the mechanism?

Paraquat is 4,4'dipyridinium chloride. There are two common ways to synthesise it starting with pyridine.

In one reaction that can be done on a large scale in water or liquid ammonia, methyl-pyridinium chloride is reacted with a base and catalytic amounts of sodium cyanide in the solvent to give a dimeric intermediate that oxidises easily into paraquat.

What is the chemical mechanism of the dimerisation reaction?

reaction-mechanism synthesis
Share
Improve this question
edited May 8 '14 at 7:36

While the mechanism is not 100% certain (or wasn't when I worked on it some time ago), the current best guess is that it is similar to the well known Benzoin condensation:

This is based on the following intermediate: 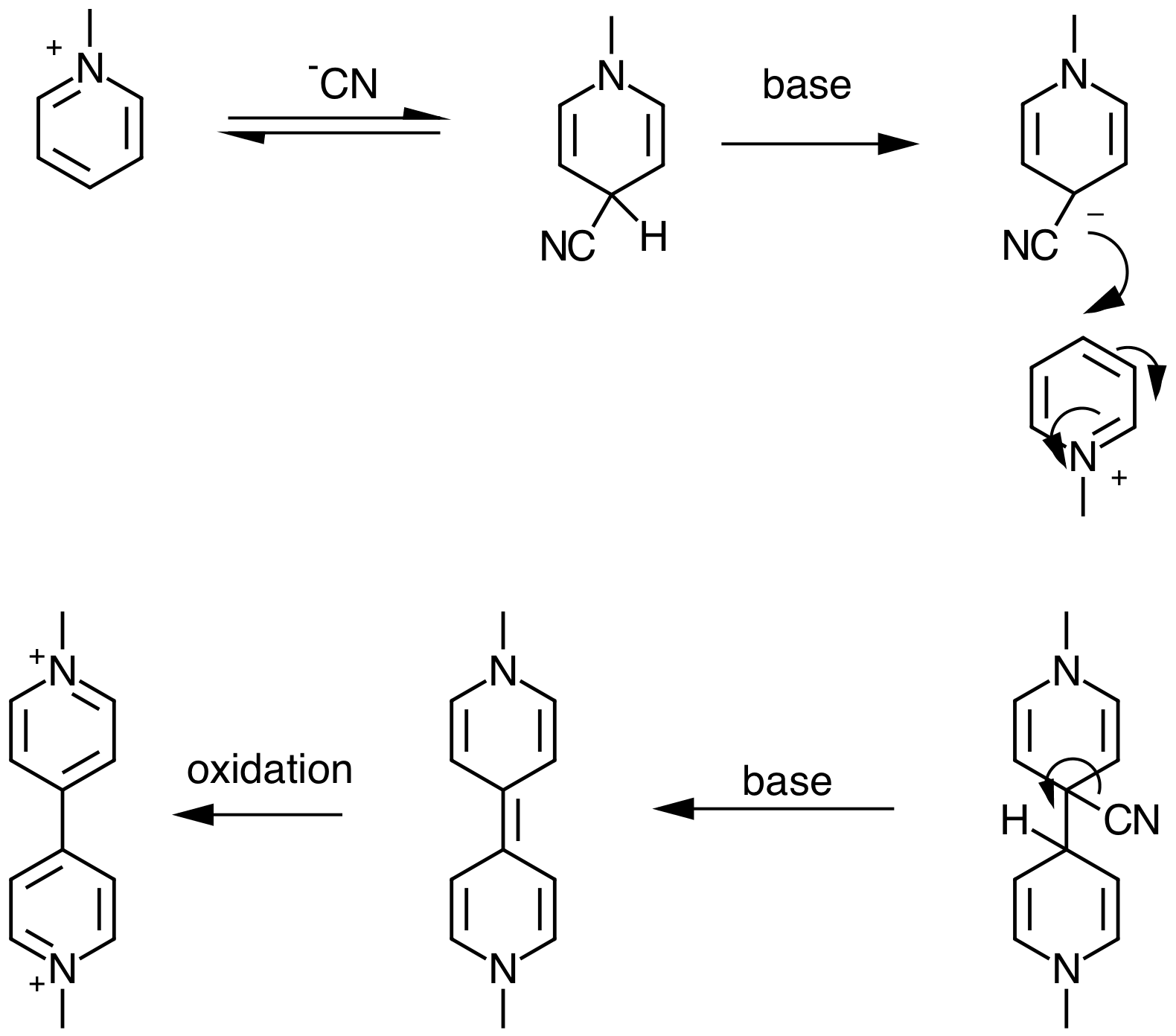 The neutral quinone-like intermediate crystallises out of solution and can be separated and then oxidised (it is very oxygen sensitive) to the desired paraquat product.

The details are partially guesswork, though, as it isn't the easiest reaction to investigate mechanistically.

Imagine that the N-methylpyridinium cation is irradiated at $\lambda$ = 300 nm. The resulting $S_1$ state oxidizes cyanide to a cyanogen radical.

Aromatization to paraquat requires the loss of two hydrogen atoms and two electrons; the latter are being used to regenerate cyanide.

The mechanism is a bit speculative but consistent and reflects the catalytic use of cyanide.

Not the answer you're looking for? Browse other questions tagged reaction-mechanism synthesis or ask your own question.

3
What is the mechanism of functionalisation of nanoparticle using long chain alcohols
4
Can toluene be oxidized to benzoic acid using Pyridinium Chlorochromate(PCC)?
2
Restricted synthesis; formation of nucleophile and electrophile from one carbon source
4
What is the mechanism for the reaction of acetyl chloride and aniline?