How to decide at which end to start the numbering of the parent chain when the options for locant sets are the same?

I would like to know whether the blue or purple way of numbering is preferable? Following the two possible ways, I get the following names: 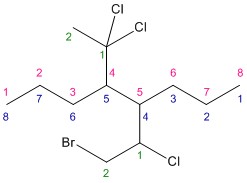 In each case, the locant set is (4, 5), so from which side should I start numbering from?

If numbering from each end of the parent chain gives the same set of locants, the next criterion stipulates that lowest locants are assigned to the substituent that is cited first as a prefix in the name.

For example ‘dibromo’ comes before ‘chloro’ since ‘bromo’ begins with ‘b’, ‘chloro’ begins with ‘c’, and the multiplicative prefix ‘di’ does not change the alphabetical order.

However, the example given in the question does not include simple prefixes but the compound substituents ‘1,1-dichloroethyl’ and ‘2-bromo-1-chloroethyl’. Such compound names are considered to begin with the first letter of their complete name.

10
Functional group naming order?
1
Order of priority for including functional groups in the parent chain compared to order of priority for numbering the parent chain
2
Assigning locants when both unsaturation and substituents are present in a hydrocarbon
4
Naming tetrahalogenated benzene
5
IUPAC name for branched alkane
1
How do I use the priority list of substituent groups to decide the parent chain for this compound?
3
Bibenzimidazole nomenclature: Indicated H and locants
9
Why is iso-octane different from other iso-s?