In a molecular dynamics context, is the methyl rotation in propene a symmetric or asymmetric internal rotor?

In a prior question, I asked about the (a)symmetry of the potential energy surface of the methyl rotation of propene. In that context, the kinetic energy of the nuclear motions is of course assumed to be negligible, and thus nuclear inertial effects are irrelevant.

Here, I want to ask about the (a)symmetry of this same internal rotation, but instead in the context of molecular dynamics (MD), where the Born-Oppenheimer approximation still applies but the kinetic energy of the nuclei is non-negligible compared to the variations in the potential energy over the course of the motion of the system. For the sake of argument, assume that the propene is in a sufficiently high rovibrational energy state for the methyl rotation that it behaves as a hindered internal rotor, and thus the nuclear motion is not "trapped" in one of the wells of the potential energy surface.

Depending on how one imagines the methyl rotation of propene to occur, it seems like it could behave as either a symmetric or an asymmetric internal rotor in an MD context. If the $\ce{H2C=CH\! -}$ portion were held fixed, the rotating methyl would be inertially symmetric due to the local $\mathrm C_3$ axis: 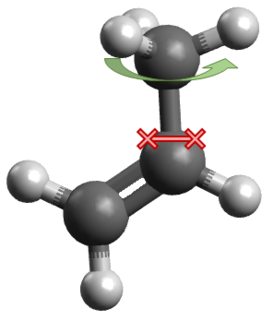 On the other hand, if the methyl group were held fixed, the rotating $\ce{C=C}$ portion would be highly inertially asymmetric: 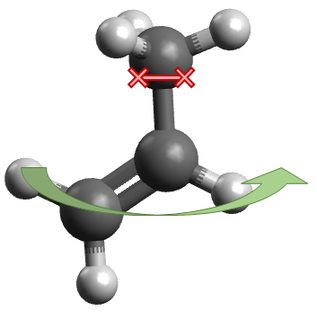 Obviously this rotation can't simultaneously be both inertially symmetric and inertially asymmetric. So which is it, and why?

My inclination is to assume that the internal rotor is asymmetrical, since the overall system does not have any axes of three-fold or higher symmetry. However, I don't know a good mathematical or group theoretic 'language' in which to define such internal rotor (a)symmetry, and so I'm unable to prove this to my own satisfaction.

The best qualitative argument I've thought of in favor of it being an asymmetric internal rotor is that the axis of the rotation (green bar) does not pass through the center of mass of the system (purple sphere / orange bar): 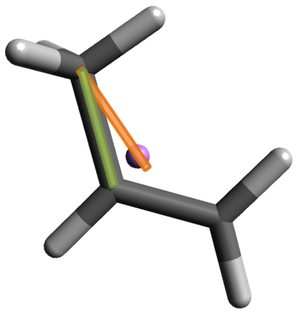 FWIW, I calculate the skew angle between the two colored bars in the above geometry to be about $18^\circ$. Anyways, as a consequence of this skewed orientiation, I think the methyl hydrogens would oscillate parallel to the axis of internal rotation while they rotate around the methyl carbon. Simultaneously, I would expect a sort of corresponding "waggle" of the ethenyl fragment.

Thus, directly related to the "why" question above: If this qualitative argument is correct, how can I express it quantitatively?

Browse other questions tagged physical-chemistry symmetry molecular-dynamics or ask your own question.

9
Does the methyl rotation in propene have a symmetric or asymmetric potential energy surface?

4
What is the "curse of dimensionality" in molecular dynamics?
9
Does the methyl rotation in propene have a symmetric or asymmetric potential energy surface?
14
Why are MD (Molecular Dynamics) simulations performed at room temperature for the purposes of studying proteins?
1
Calculating the x, y and z distances between two molecules - AMBER (Molecular Dynamics)
13
Relationship between the symmetry number of a molecule as used in rotational spectroscopy and point group
3
Determining the torsion energy profile of butadiene by molecular dynamics
2
How can I build the wyoming like montmorillonite unit cell in avogadro for a molecular dynamics simulation?