Are there proteins with permanently bound magnesium?

Do you know something about the existence of a magnesium containing protein/enzyme in which magnesium is coordinated in the structure and the structure is stable? (like iron in haemoglobin or zinc in zinc fingers)

From the look of things you may actually be referring to a lot of different proteins, however I managed to grab two that I found fascinating:

A glycolytic enzyme which catalyzes the reversible dehydration of 2-phosphoglycerate to phosphoenolpyruvate: 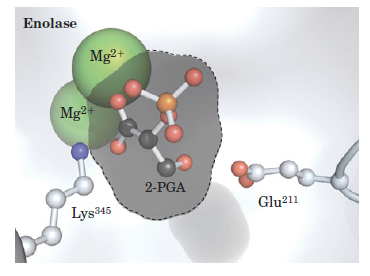 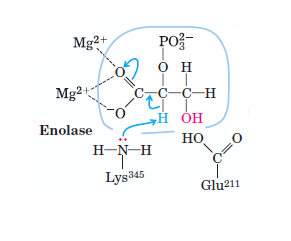 X-ray structures of ARF1.GDP and ARF1.GTP, were determined by Dagmar Ringe and by Jonathan Goldberg: 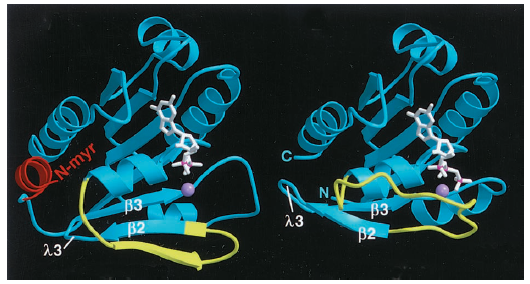 X-ray structures of (a) ARF1.GDP (left) and (b)ARF1.GMPPNP (right) (GMPPNP is a nonhydrolyzable GTP analog in which the O atom linking GTP’s beta- and gamma-phosphorus atoms is replaced by an NH group.)

The bound nucleotides are drawn in stick form in white with their phosphorus atoms magenta and their bound $\ce{Mg^2+}$ ions shown as lavender spheres.

In ARF1.GDP, the protein’s N-terminal helix (red) together with its covalently linked myristoyl group (not present in the X-ray structures) are bound in a shallow hydrophobic groove on the surface of the protein formed in part by the residues of loop gamma 3.

3
Which software is suitable to calculate the root mean square deviation between two protein structures?
36
Why does carbon monoxide have a greater affinity for hemoglobin than oxygen?
0
Relationship between inhibition constant Ki and interaction energy?
3
Why does this protein seem to have multiple chains?
1
What citrate is a common anticoagulant?
4
How does existence of alpha and beta form of glucose prove that it exists as a cyclic structure
1
What is the definition of a “Simple enzyme” exactly? Is it an enzyme that does not require a co-factor?