Which one of the processes is NOT spontaneous?

I failed this class last semester so I'm redoing the tests to see if I can get this over with, however I'm confused with this question. To find out if a process is spontaneous I need to identify the oxidizing and reduction agents.

For starting purposes, you should write the half cells, either with their oxidation/reduction potentials. Now if you want to compare the oxidizing species then you have to consider the oxidizing potentials of all the species and the one with highest value will be the spontaneous half cell and the reverse of the other one will occur. Remember you should consider only one type of potential at a time(i.e. either oxidation or reduction) for comparison.

The answer is actually the opposite of what you've said. 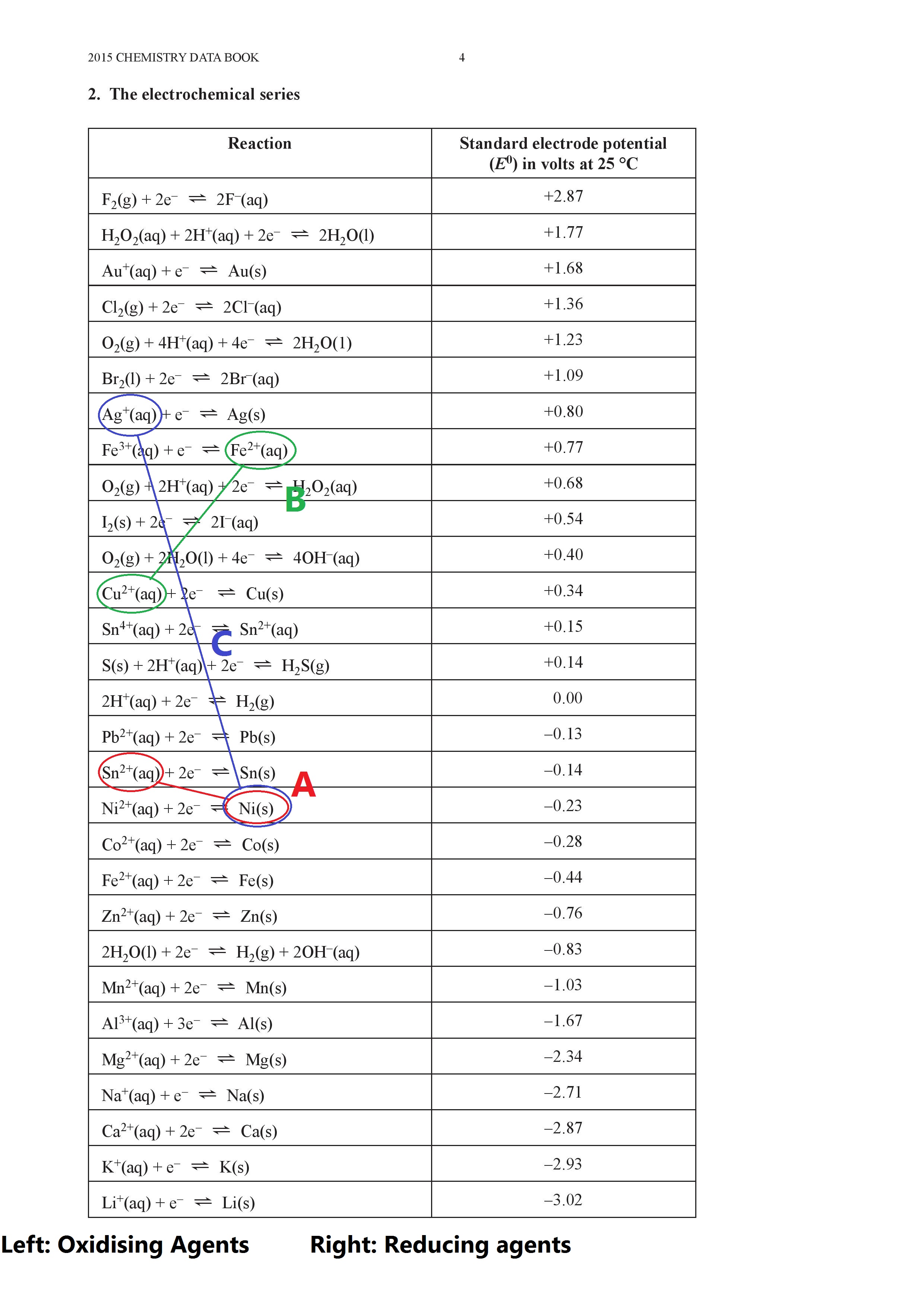 From this diagram above we can see that for B, Silver (Ag) which is the oxidising agent is below the reducing agent (Iron II). This does not obey the rule meaning it will be non spontaneous.

In science we generally think about processes which produce more energy being more energetic. Free Energy, mostly (afaik) used in chemistry is a thermodynamic term and every student of chemistry should understand that

You should understand the concepts of entropy, energy, enthalpy, equilibrium, Gibbs and Helmholtz Free Energy and learn what assumptions are required to use the various relationships. (Equilibrium, Isolated, Closed, Open systems, constant pressure, constant temperature, constant entropy, etc.). You also need some perspective: Thermodynamics was created long before we understood about the molecular/atomic nature of chemicals. The concept of equilibrium is vital to understand. Beginning chemistry deals with processes near equilibrium. Equilibrium ignores time. In this worldview, any process is understood to have both a thermodynamic aspect and a kinetic aspect - with the kinetics being what is concerned about the timing of events. Another way to put this is that thermodynamics deals with the starting state and the final state of a particular process, its equations deal with path independent quantities. When I looked at your three equations, I immediately noticed the Cu++. Do you, just from a common sense view, really think iron metal is going to oxidize copper? So you'd rather have a pocket full of iron nails get wet than a pocket full of pennies? Because the Cu is more likely to react (be oxidized) than the iron? Well, no. Iron is much more likely to rust than copper is to oxidize (although green copper oxidation is pretty common). By looking, I also noticed Ag+ and I know that silver is, like copper, a common metal used for cups, silverware (hint, hint) and coins. In other words, it is not very susceptible to corrosion (oxidation). In other words, the metal Ag° is not prone to oxidation which means that the ion must be prone to reduction. So, even though I am not that familiar with Ni oxidation potentials, I know Cu° is more stable than Fe° (at pH 7) and I strongly suspect Ag° is more stable than Ni°. I'd have to check the Ni° & Sn° couple, but ever heard of tin cans? Yeah, again the products of both A and C are known (by common sense) to be the more stable metals while just the opposite is true for B. Now, it would be much better to actually check the electrochemical series https://en.wikipedia.org/wiki/Standard_electrode_potential_(data_page). And in a chemistry class, you must make that your standard practice, but you probably shouldn't even had to have done that to answer this question → IF you understood this stuff.
It's important to note here that the reason they're teaching you this electrochemistry, is not because it is all that important to learn how to plate copper or silver out of a solution, but to get you to learn the relationships between free energy and spontaneity (and enthalpy and entropy and energy) which are very common in the chemical literature. You need to carefully learn this stuff. The reason why they're carefully teaching it is because it isn't easy to learn but it's important to learn. The greater the Gibbs Free energy the more spontaneous ONLY makes sense if you understand they're talking about the larger negative quantity. This is undoubtedly confusing, and once you're burned a couple of times, you'll realize that you have to make sure you're on the same page as the person talking about "greater" or "more" when they aren't being specific about the sign of the quantity. A spontaneous process has a greater negative free energy.

Not the answer you're looking for? Browse other questions tagged inorganic-chemistry redox or ask your own question.

5
Why do sodium halides react so differently with sulfuric acid?
2
Terminology of redox reactions: which species are the oxidizing and reducing agents?
0
How to identify the reduction in a given redox equation of iron chloride and chlorine?
1
Determine products of redox-reaction (KMnO4) by Standard electrode potential
2
Reversibility of a reaction