Is propanone responsible for photochemical smog?

Volatile organic compounds (VOCs) are organic chemicals that have a high vapor pressure at ordinary room temperature. Their high vapor pressure results from a low boiling point, which causes large numbers of molecules to evaporate or sublimate from the liquid or solid form of the compound and enter the surrounding air, a trait known as volatility. For example, formaldehyde, which evaporates from paint and releases from materials has a boiling point of only –19 °C (–2 °F).

Indeed, propanone(acetone) is a VOC. Majority of acetone is released from industries origins. It indeed evaporates rapidly, from water and soil and has a 22-day half-life and degraded by UV light via photolysis primarily into methane and ethane or other alkyl, alkoxy or acyl radical.

As said, the main components of photochemical smog is nitrogen dioxide, hydrocarbons and aldehydes. The reaction include breakdown of hydrocarbons and aldehydes into alkyl and alkoxy radicals. These radicals react with nitrogen dioxide to form PAN(peroxyacetyl nitrate) which is the main cause of photochemical smog. The reaction mechanism is given here:

Another mechanism is given here: 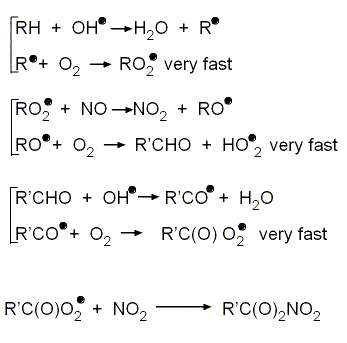 What is observed is that the active component is acyl radical which is necessary in the PAN formation. Both aldehyde and acetone necessitate in acyl radical through their decomposition. From here:

But acetone contribution to photochemical smog is negligible as acetone is quite stable to irradiation and photolysis. From here:

[...]Acetone has shown little reactivity to irradiation. Its contribution to produce significant amount of PAN or ozone in ambient air is negligible.

13
Concise description of primary organic reaction types mechanisms
18
(Computationally) finding similarity between two organic compounds
2
Alternative mechanism for carbocation rearrangements
6
I (might) have accidentally combined these mold-killers at home: Any adverse reactions?
8
What is the actual mechanism of Fenton reaction?
3
Which reaction rate formula is suited for diatomic molecules in a plasma?