Both fatty acid and polyethylene are made (mostly) of carbons with hydrogens with a very similar configuration, yet, their properties are very different. What am I missing?

I agree with @Mithoron's earlier comment that even if these two types of compounds are somewhat similar in structure (e.g., they both consist of long aliphatic chains) they are not exactly alike. If you perhaps reformulate your question it may allow us to answer it more precisely. I will make an attempt below.

A fatty acid contains a carboxylic acid group attached to an aliphatic chain. This chain can be either saturated or unsaturated and still be referred as a fatty acid. Most naturally occurring fatty acids can have somewhere between 4 up to 28 carbons in their chain. 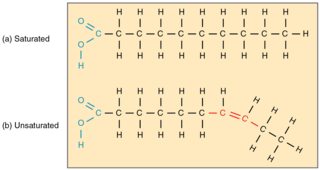 Polyethylene (also named polyethene or poly(methylene) is a polymer with a variation on the chemical formula $\ce{(C2H4)_n}$ lacking a carboxyl acid group. Some important similarities between the two compounds include that the melting profile is dependent on the chain lengths. As there are greater intermolecular forces between long chains compared with smaller simple molecules.

Polyethylene is therefore a wholly non-polar compounds, while the overall polarity of fatty acids depends on which functional group is the most dominant, the head carboxyl acid group or the alkyl chain group.

In the table below I have summarized the melting temperatures of some fatty acids and polyethylenes (which are equivalent to small straight-chain alkanes) to show the difference. Observe how the melting point changes drastically by the introduction of a double bond in the saturated versus unsaturated fatty acids of the same chain length. 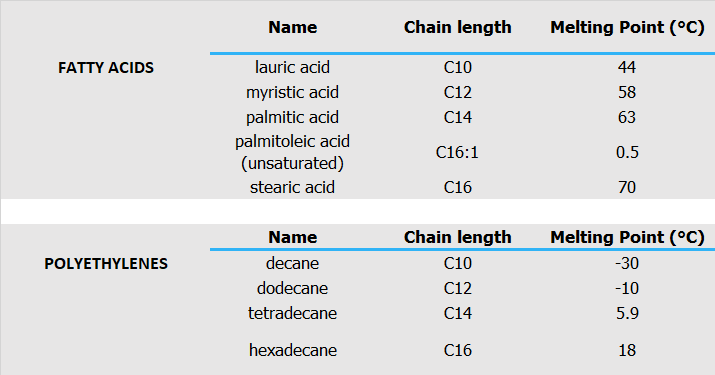 A characteristic property of very long chained polyethylenes (with molecular weights numbering in the millions) is that they are thermoplastics, meaning they can be heated to their melting point, cooled, and reheated again without significant degradation. Fatty acids can be derivatized to other compounds, including polymers, to gain similar properties, but are not thermoplastic in their underivatized form.

I hope this extended answer somewhat helps you to find and answer to your question.

The main difference is the polarity. Alcanes and polyethylene are nearly not polar, because both $\ce{C}$ and $\ce{H}$ have nearly the same electronegativity. Fatty acids contains the group $\ce{-COOH}$. As the oxygen atom electronegativity is rather different from Carbon or Hydrogen, the molecules of fatty acid are polar and behave quite differently form the alcanes, whatever the length of the chain.

Or conversely, the fatty acid $\ce{CH3(CH2)100000COOH}$ probably has properties that are indistinguishable from the corresponding polyethylene.

Not the answer you're looking for? Browse other questions tagged organic-chemistry plastics fats or ask your own question.

3
What happens when C17H35COO-, a soap, reacts with an acidic solution?
5
Why is Omega-3 a polyunsaturated and not a monounsaturated fatty acid?
0
Which of the following have the same molecular formula as the molecule shown in the model?
0
Trying to understand the causes and implications of kinks in fatty acid chains
2
How are phosphoglycerides different from phospholipids?
2
Why do double bonds cause kinks in fatty acid chains?
4
Are all fatty acids monocarboxylic acids?